Forager, the upcoming Zelda-like RPG, comes to us from developer HopFrog and publisher Humble Bundle. It serves up a grand, open-ended adventure where you'll head out into an expansive open world to establish your own unique playstyle.

You can, for example, become an adventurer, one who sets out to conquer the game's four old-school dungeons. Along the way, you'll meet and help plenty of NPCs, take on powerful bosses, solve puzzles, and scour the land for its finest treasure.

Then again, perhaps you'd prefer a less dangerous lifestyle, in which case you could take up farming. Living off the land, cultivating crops, and looking after animals still serves up plenty of its own challenges, so you'll always find interesting things to do regardless of how you want to play.

Some of the other occupations you could work your way toward include merchant, gatherer, and builder – with each being as deep and rewarding as the next. This is all made possible thanks to the game's smart free-form upgrade system that makes creating your perfect character a breeze. All things considered, it's honestly no surprise that Forager received rave reviews when it released on PC earlier this year, with many praising its accessible nature, cheerful tone, and sense of adventure. 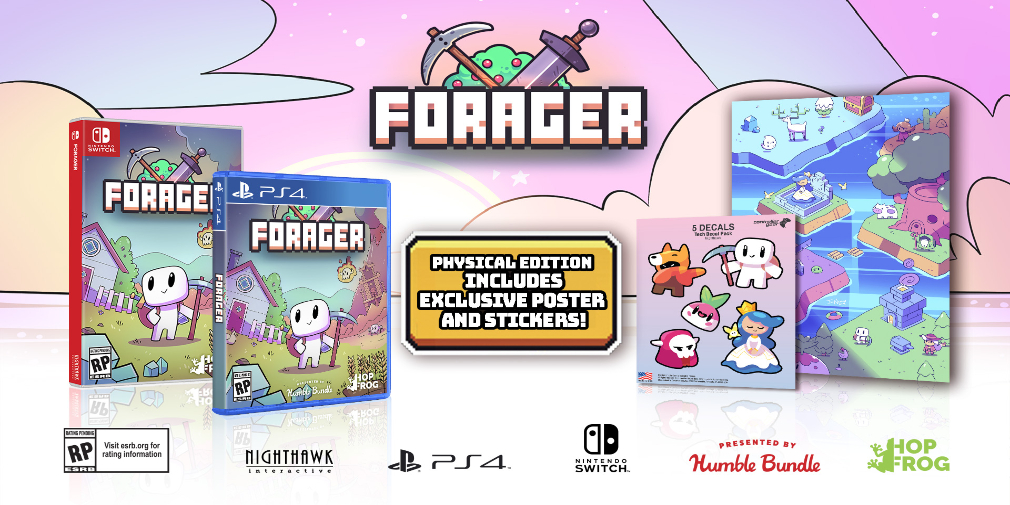 The neat physical edition comes with special packaging, an exclusive poster, and some stickers. It's priced at $29.99 in North America, so you can perhaps expect a physical copy to set you back around £40 over her in the UK.

The digital version of Forager will launch on July 30th on the eShop, while those looking to get the physical edition will have to wait until September 10th in North America and September 13th in Europe. You can check out some more info over on the game's official site. I'm hopeful that we might eventually see an iOS or Android port, but a Switch version will more than suffice for now.