Harry Potter: Wizards Unite actually has combat. Shocking, I know, but in this game you can actually, like, fight enemies. And that's crazy.

Do they do that in the books? I thought all the conflict was against ideals and they fought by shouting bastardised Latin, like UK Parliament sixty years ago. Voldemort is Right Honourable, alright.

If you want to fight against enemies, Confoundables, and Wizarding Challenges in Harry Potter: Wizards Unite, we have the tips you need below…

Need more friends on Harry Potter: Wizards Unite? Make sure to take a look at our list of 2300+ friend codes. 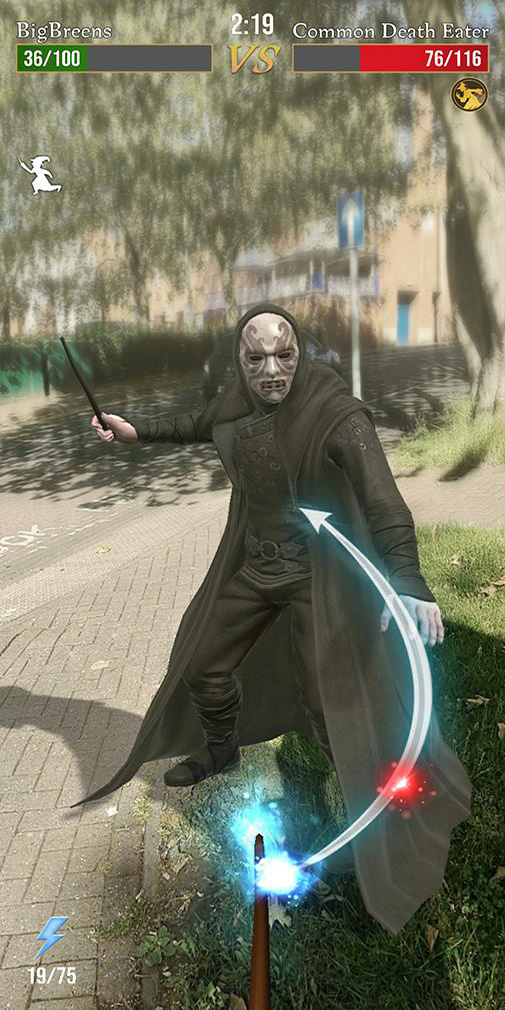 You need to cast spells. Like, pretty much for everything in this game. You'll be casting spells an awful lot.

Whether it's because you've come up against a Confoundable, or you're simply embarking on a tough Wizarding Challenge, you'll be casting spells, though those types of spells depend on the encounter.

For Confoundables, you'll be pulling out one of a variety of spells which will dispell and undo and evil magic which is floating about the air like chem trails.

Some Confoundables are more difficult, and may even attack you. You'll be pulling out harsher spells for these, while having to watch your health.

Though, the main time you'll be engaging in that kind of combat will be in Fortresses, where you'll undergo Wizarding Challenges.

You'll be casting a spell, your enemies will eat it, and then they'll retaliate. When they fight back, you'll use a Protego spell to defend, and will swipe the screen diagonally, in a direction the game specifies.

It's not the most engaging combat we've ever seen, though it's perfectly functional enough.

If things get difficult when fighting, you can use potions to ease things, but it's more about your abilities before going into battle, as opposed to your spell casting skills.

Confoundables the dastardly monsters and magical relics you find in the environment while exploring. Each desires a spell cast at it to shut it up, essentially.

Should see a beam of light emanating from the Confoundable, you've found a rare one, well worth taking on. Use potions that prevent escapes to make these Confoundables easier. Red light indicates that the Confoundable will likely try to fight you.

In general, you should always attempt to catch Confoundables, unless you're really saving the spell energy for something.

When you're in combat with an actual enemy, not just a regular Confoundable, you'll need to aim your wand at them, which is somewhat awkward.

Drag your finger around the screen, and pull down an aiming reticule from the top of the screen, and hover it over the enemy to lock on. This is obviously tougher for smaller, moving targets.

Aiming is actually the most awkward thing in the game right now, but just try and pull down from the top, and hover it over enemies as best you can.

If you want to deal out the most damage and cast some Masterful spells, you will need not only accuracy, but speed too.

When casting, it's not clear, but speed factors in massively. Trace your spells with accuracy and speed in order to get closer to Masterful casts.

Sometimes, you're better off casting a spell with less accuracy, and more speed. Experiment as best you can, but of course, if you mess up the trace too much, spells won't cast at all.