Summon the scouts you want with this guide

Attack on Titan: Assault is now available on Android and iOS worldwide, and you need more soldiers for your team.

This is a gacha game, and we know you want to earn as many characters and soldiers as possible, all without paying a penny. Naturally.

We've got the guide for you. Read on and you'll be summoning loads of soldiers, without ever breaking the bank.

The importance of teamwork 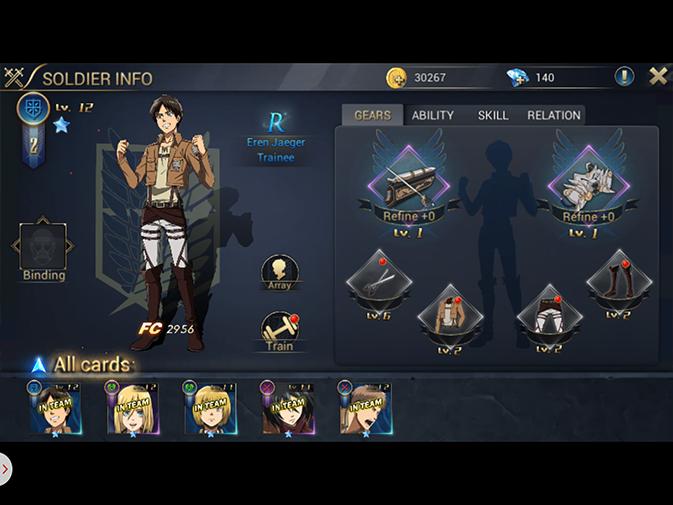 There's strength in numbers, and as such, you shouldn't be heading into battle without a full team of properly equipped soldiers, and that's exactly what we're going to give you the low down on here.

But any soldier isn't good enough. There's ranks, levels, equipment, and much more to think about.

But here's the bottom line: Attack on Titan: Assault is a gacha game, and will be asking you to invest both in-game and premium currency to get more characters. You want those soldiers for free, I know you do, and with some smart play you'll be able to get plenty of soldiers without paying a penny.

First of all, you should know that each day you'll get a free summon or two. Check the Enlist area on the main menu every day and use up and free summons you have.

You'll also be able to earn items which can be directly traded for a free summon in its respective summoning area. These can be earned from daily log-in bonuses, achievements, tasks, or even from chests which open once you get enough stars in mission chapters.

All of these come together to give you a bunch of free summons, and you should feel free to use them all up.

When you run out of free summons, it's time to buy. You can use Gold or Diamonds, but both have several other uses. Gold is well spent on upgrading team members, while Diamonds are have many other functions, since they are premium currency.

When it comes to Gold and Diamonds, try and save up for the 10-summon option, to maximise your chances of a good pull.

Yep, it's a gacha game alright, as we've mentioned. As such, the outcomes can be pretty random.

If you feel dedicated to Attack on Titan: Assault, then you might want to make multiple accounts and re-roll the first few free summons you can get, in hopes of rarer characters.

R are the most common, while SSR are the rarest. It's hard to get an SSR summon, so if you pull one, stick with that account.

In the gallery you'll be able to synthesise soldiers from the fragments you can pull, earn, or purchase in-game.

Once you have enough fragments, it's essentially a guaranteed summon of whichever character the fragments are for.

If you pull a lot of fragments from the gacha system, check the gallery often to see how far you are from new characters, and if you can synthesise any already.

There are also equipment summons and Titan summons, which add a layer of complexity to things.

All of your characters will want decent equipment, but since you can only summon with diamonds, you want to be careful and show restraint.

Titan summons unlock at level 20, and allow you to bring Titans into battle. Obviously you'll want a couple of those, but again, don't go overboard and blow all of your currencies at once.

Harry Potter: Wizards Unite cheats, tips - First things you should do when starting the game