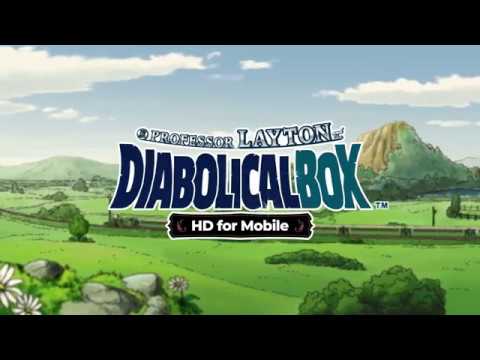 Diabolical Box was the second entry in the long-running puzzle series, following on from The Curious Village. It originally released back in 2007 in Japan, before making a journey to other regions two years later. It followed the titular professor and his apprentice Luke as they attempted to solve the mystery behind a box which killed all who opened it.

The Professor Layton series, for those unaware of it, were well known for their tightly-woven stories, each tied together through beautifully animated scenes which play as you move between screens. In many ways they are point and click adventure games, however each game contains a boxload of puzzles which must be solved to advance the story. There's also normally some smaller distractions to be found in in-menu minigames revolving around brewing tea or exercising overweight hamsters.

Professor Layton and the Diabolical Box contains 158 puzzles, each spread out throughout the 8-10 hours story. We're not sure about any new features added to the game as part of the overhaul, however this 'HD for Mobile' edition previously released last year in Japan and didn't feature any new content at the time.

You can find Professor Layton and the Diabolical box on both Google Play and the App Store as a premium title. There appears to be some fiddliness what with the dual naming of Diabolical Box and Pandora's Box, but some pages appear to now be redirecting based on region.

Read more about the latest mobile and handheld news in our dedicated section.

The hugely creative Draw a Stickman: AR is now available for iOS devices

Professor Layton and the Diabolical Box heads to iPhone, iPad, and Android in Japan