The Nintendo Switch Labo VR: A gateway headset for all ages

Nintendo have a strange reputation among gaming circles. Some people lament how slow the giant has been to embrace certain technologies — with the company consistently behind its competitors in the online multiplayer and visual resolution spaces. Others use its family friendly outlook as a way to dismiss who the games are made for. Yet Nintendo have always innovated, and fun is an ageless concept. Nintendo Labo VR is another amazing step forward for them, and like (almost) always it is done behind the curve, but with stacks of competency.

Much like rumble features, stereoscopic 3D and motion controls, Nintendo are not first to the scene with VR this time. Instead they are the first to make it appear extremely accessible on a mainstream console.

I've been tinkering with the Labo VR kit since Tuesday. It's my first experience with Nintendo's cardboard system, and as a father of three I'm still unsure of the durability of the whole thing. The technology, however, is exceptional, and Nintendo have 'done another Nintendo' again.

The full Labo VR kit is what I've spent my time with. The full kit includes a variety of smaller objects, and five 'larger' objects: Blaster, Camera, Bird, Elephant and Wind Pedal, as well as the VR Goggles themselves.

There's a little cartridge inside the box which includes a really handy video guide to putting each of the Toy-Con together. It's got a slightly self-aware sense of humour, and some easy listening funk to keep you sane while it guides you through assembly. Each section gives you the approximate time that they'll take to finish, with about 4-5 hours needed to get everything right. Most of this is, admittedly, the blaster due to its cocking mechanism. The instructions are extremely approachable, you can even pause, rewind and zoom around them to make sure that you get all of the tabs and pieces in place correctly.

From a tech approach, the VR headsetf is pretty simple as it uses the existing Nintendo tech. Because of the console's resolution you can see the lines between pixels on the screen, it also massively increases any imperfections which you've managed to pick up as well. That said, there's not much blurring when you move erratically, although it's hard to move erratically what with the lack of a head strap to hold the console on. I've got one eye which is slightly short sighted and another which is slightly long sighted, in real life they balance each other out, but I had no more issues with the Labo VR than I had with the likes of the HTC Vive or Oculus Rift.

The absence of a head strap is very strange. It's nice that the console's weight is borne by the hands of the player, because this takes a lot of strain off of the neck and top of the spine, however, it's the equivalent of holding a hardback book up to your nose. Most people will have sore arms after 15-20 minutes of play.

After building each of the Toy-Con you gain access to new games and ways to play. Completing the VR Headset opens up the VR plaza, which starts with 16 games, but ends up with over 60. Each of these are made with the on-cartridge game creation software. They are all quite simple in idea; one has you pursuing another vehicle, trying to smash it a hammer; another is Kitchen Capers which puts you in a 3D environment with lots of kitchen things to mess around with, like a parody simulator game. Many of these are exceptionally simple, some are just sandbox, but they're short and specific examples of how the VR headset can be used in future projects. 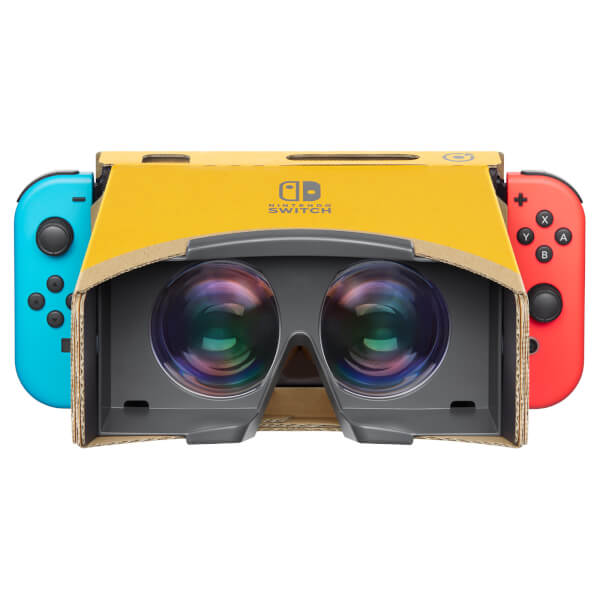 Many of them, however, highlight an issue which I didn't expect when Nintendo took the Switch to VR: depth of field. Not depth of field in the vision manner, but in the actual detection of forward momentum. The gyro in the switch and the Joy-Con can only detect change of orientation, but not relative direction. This means that at no point will you be able to reach to your right and grab something 10cms away, then place it to your front 30cms away, not without the game having to assume your intent through your movement.

This is a bit of a shame, to be honest, and while the Elephant Toy-Con can manage that depth, others can't. This means that the Elephant design, or future similar, will be required to play something like whack a mole. 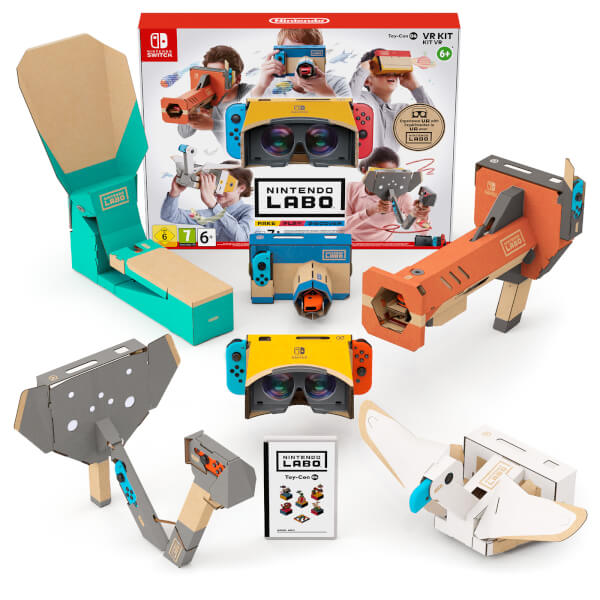 Perhaps the cutest feature of the Labo VR is the option to have it so that the light sensor detects when the Switch is inside the VR. This means you can slide it in and out, with the screen changing from 2D to 3D almost instantly. It's a very good use of existing technology, and a shame that it's tucked away in menus.

Let's get down to discussing the different Toy-Con.

The camera Toy-Con is extremely clever. It's built in a way that one Joy-Con fits into the front as a shutter, and the other is seated in the lens of the camera within a twisting zoom. The ocean photography game which works with this actually blew me away. I'd already played with the Blaster and the Elephant at the time — which seem to be regarded as the best — but the Ocean Camera experience really caught me off guard.

Ocean Camera has you moving up and down a vertical shaft underwater, turning and looking on the spot before using your zoom and shutter to take pictures of the ocean life. There's objectives, challenges, and you get to pick out and keep your favourite pictures for a gallery. I very quickly got the hang of it, and played on it for far too long. I'd definitely buy a larger experience with the same design as this — it was both peaceful and fun.

Next up is the Elephant. This is easily the most feature impressive of all of the Toy-Con. A Joy-Con goes into one end of the snout, and the other into the other. A series of elastic bands then work together to make the snout extendable, which allows games to have a slight depth of field. 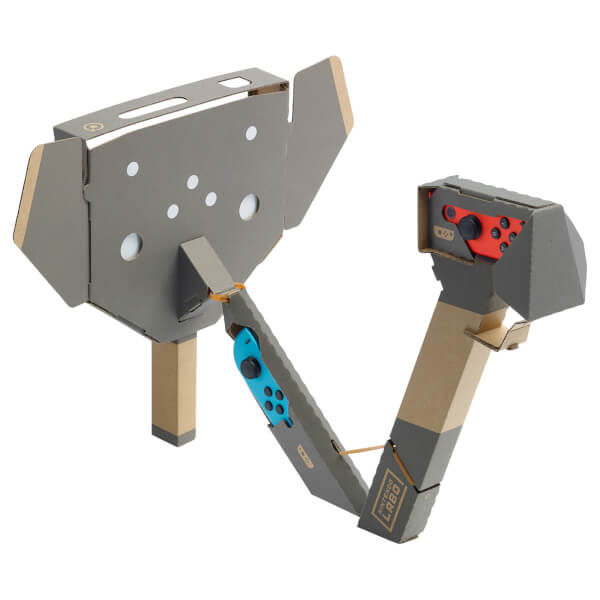 This new depth of field is best used in the Marble Run game, you reach out and grab various pipes, tubes and platforms in order to alter the path of bouncing or rolling marbles and get them into certain areas. Do this well enough and you pass the level, with more challenges to unlock. Later levels introduce bouncing, which is really interesting mechanic in 3D as it's hard to project objects in a digital space.

After the Elephant comes the Bird. The Bird is easily the weirdest one. A Joy-Con forms the beak and the base of the Bird, with the Toy-Con having grips which the player squeezes in order to have the two Joy-Con become closer. In both of the Bird games this results in your wings flapping and you move forward. I quite enjoyed the bird exploration game, where you collected items within a large 3D space and took them to certain places to hatch eggs.

There's also the Wind Pedal, which fans your face, but you can also use to fly. The Wind Pedal Toy-Con is curious and feels out of place, but maybe somebody will make an amazing drumming game using it and it'll suddenly become the hero of the set. 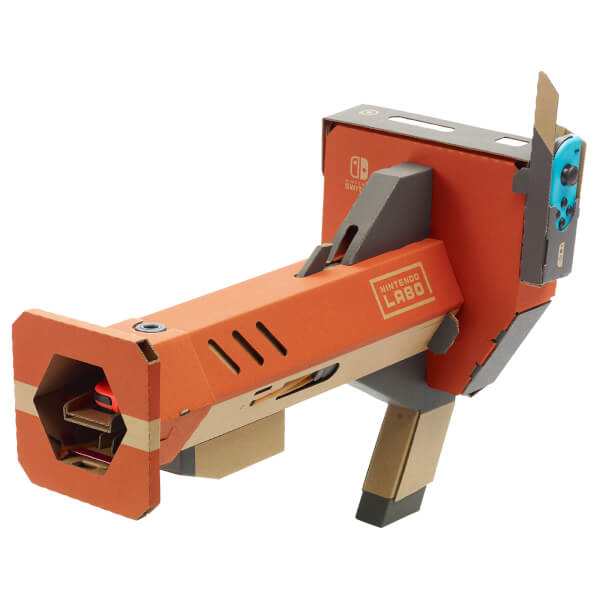 Finally there's the Blaster Toy-Con. It's very impressive, and also takes the longest to build. One Joy-Con goes into the end to detect angle (alongside the Switch) and the other goes into a mount near the player's left ear. In the main shooting game the left-ear one can be lowered to start a time-freeze mode. Otherwise players cock the weapon and fire it using a button on the back. Due to the smart design it recoils after firing, as there's a bolt within the barrel of the gun.

In addition to the games there are also 3D videos, information on how the technology works, cool little guides for how to decorate your Toy-Con and smaller little gadgets you can play with.

All in all there are just under 80 games to play out of the box. However with the Labo VR Garage there are a lot more options of things to do. Obviously many of us are waiting on the VR to be implemented into larger games, however it is already great value for money for what you get with it, and the games included do lend hope to more developers to pick up the pace, and maybe even reach out a kind hand to restart a few long lost genres. Bandai Namco, I'm looking at you to bring back Point Blank now please.

VR Fanatics probably aren't going to find anything new or smart here, the Toy-Con will probably simply look like quaint children's toys to them. However, other than them using a lot of room in the house, they're — as with all Nintendo stuff — suitable for all ages, and much like the Wii introduced motion control to a new audience, Labo VR is a great way to do the same with VR.

Looking for more information on the Switch? We've got a whole section dedicated to it, check it out here.