Will the District ANC Bluetooth Headphones become your next mobile gaming purchase?

Depends how mobile you are

It's fair to say that sometimes we overlook the sonic aspects of mobile gaming. Sometimes we forget our headphones, sometimes we just don't want the bleeps and bloops of Candy Crush polluting our air space as well as our line of sight. But there are some games that demand to be listened to, that ask you to slip on some headphones and allow them to build a world for you.

It's at times like that you're going to want something a little stronger than the headphones that came with your phone or tablet. That's where the District ANC Bluetooth Headphones from KitSound want to come in. They're not just big, chunky headphones that are going to make you feel a bit like an extra from Star Wars, they've also got some really interesting technology in them that could make them perfect for mobile gamers.

They're not without their faults though, so we thought it was a good idea to write up our experience with the headphones over the week or so we've been using them. This isn't so much a review as a field test, which is why there isn't a score at the end. Hopefully though, you'll get the sense as to whether we think you should throw your cash down on these.

The first thing you're going to notice about the headphones is just how sturdy they are. If you're anything like me, then the weight and heft of a new gadget is one of the most important parts of the experience. Maybe it's because I've got a history of breaking gadgets with my ham-hock digits, but I tend to be able to spot something that's not going to last, and I wouldn't put the District ANC Bluetooth Headphones in that category. 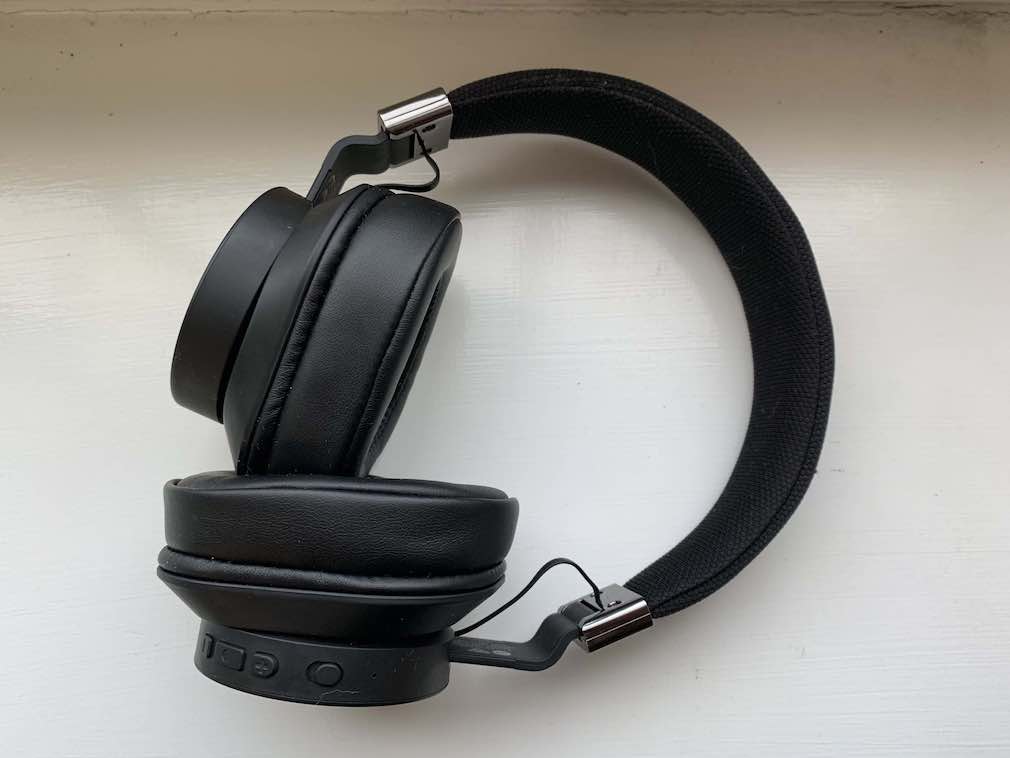 Next you'll come to one of the coolest aspects of the 'phones - they charge wirelessly. You get a Qi charging pad included in the package, and all you need to do to juice up the battery is place the headphones in the right place. The charging is quick, about 3 hours by our reckoning, and the pad is compatible with any other device that uses the Qi format.

Once you've whammed in all that disappointingly mundane wireless power (am I the only one who wishes there were more flashes of lightning involved in wireless charging?), the headphones last about 20 hours. You'll need to remember to turn them off when you're not using them though, something I found out on my first charge when I came back to the headphones the next day to find them dead.

Slipping them on for the first time, they're comfy, but not too tight around the head. That's pretty good, since between you and me I've got a massive head - I imagine the comfort will be even more comfortable if you're unfortunate enough to have a boring, normal-sized head. The ear cups are soft and generous, and to be honest I don't really know how to go about describing them. They feel good on my ears? I wouldn't mind them being there more than they have been up to now in my life? Writing about headphones is a lot harder than writing about mobile games, let me tell you that.

How does that sound?

Then we get to the most important part of the headphone experience - how do the bloody things sound? And I'll tell you what, they sound rather lovely. There's a chunkiness to the lower end that you only get the smallest hint of with lesser devices, and an all round richness to the tone that slithers and finagles its way inside you rather than battering down your hatches and yelling 'HOWDY THIS IS THE NOISES.' 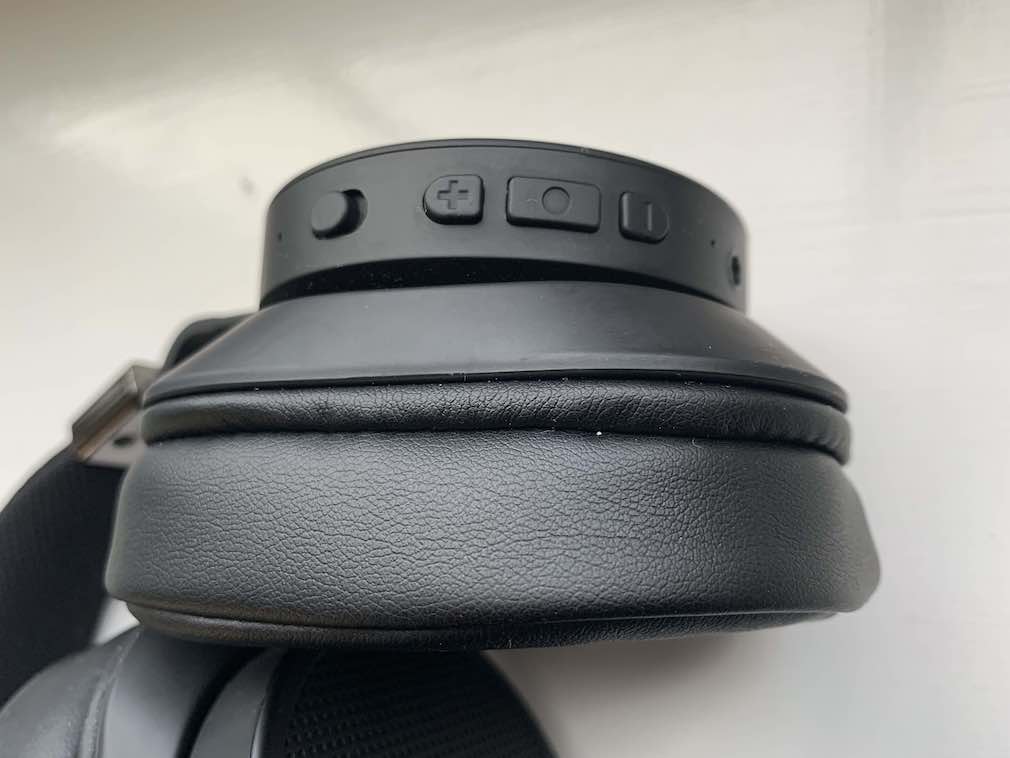 That subtlety runs through all of the aural outputs, allowing you to pick up every click-clack reload or jingle-jangle monster approach. Soundtracks flow through you like a river of delicious golden goop, lapping gently at your neurons and tantalising you with notes and refrains you never caught before.

Basically what I'm trying to say is that they sound really, really good. If you wear these while you're playing a game, it's going to make the experience even better. Then there's the noise-cancelling, which uses mics in the headphones to change the frequencies you're hearing to block out the ones outside. It sounds like bonkers witchcraft to me, but then I'm still impressed by those flowers that bop around when you play them music.

Okay, so so far so good. What you have here is a nice pair of chunky, wireless-charging, awesome-sounding headphones that you feel like you could call Lando Calrissian on. But there are some problems when it comes to other aspects of what the District ANC Bluetooth Headphones do.

For one thing, these aren't that good if you want to use them when you're working out. A good stomp throws them off whack a little, with crackles and distortions creeping in, which can be annoying when you're blasting out some death metal to try and up your reps, or whatever the hell it is you people do. 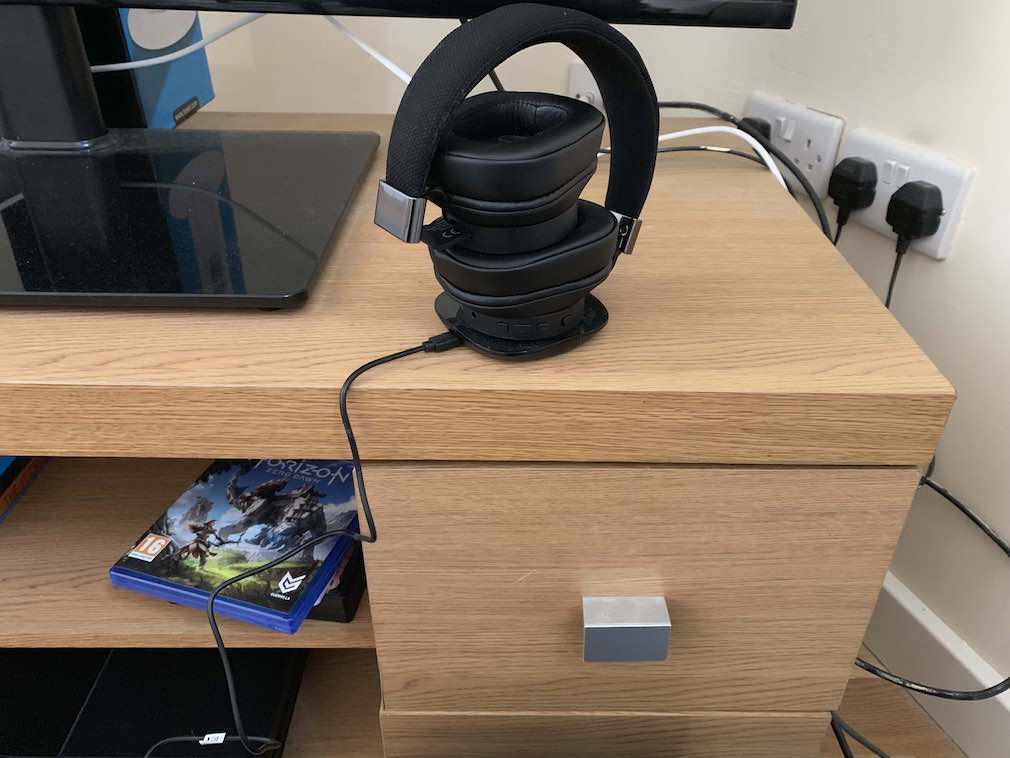 Then there's the heft - I love it, but if you're looking for something you can pack down to fit in your carry-on you're going to be a little bit disappointed, even though the 'phones fold down into a more manageable size. Also, for all the glitz and glamour of wireless charging, you'll be a bit stuffed if they run out of juice and you've left your charge pad at home. There's a Micro USB port that lets you get some energy into the headphones, but that's hardly as cool or as easy.

However, if you're looking for a mid-range pair of headphones to be part of a gaming set-up where you live, then they're pretty much perfect for the task. I guess what we're saying is that the District ANC Bluetooth Headphones nail the gaming part, but the mobile bit needs a bit more work.