It may be portable, but don't play it outside

Around two minutes into Nekopara Vol. 2, you get a pretty gratuitous panty shot. One of the catgirls goes tumbling in an animated cutscene, and bam. There it is.

This is useful information to have if you intend on playing Nekopara Vol. 2 in a public place. For me, this scene happened on a train, sat at a table, surrounded by stern-looking women who I definitely did not want to see my screen.

It's fairly safe to say that the game retains a lot of its adult content. This isn't the full, uncensored version - indeed, it's actually more censored than the PC release. But hoo boy, does it go places.

The same of which can't be said for the plot. Nekopara Vol. 2's story is basically a loose thread of events which give your character an excuse to have sex with various catgirls, all the while running a successful bakery.

He's completely clueless about why his bakery is such a success, despite the fact he's sleeping with half the obviously attractive staff there. Possibly because he's also pretty oblivious to the fact that the other characters in the game are attractive. Each romance seemingly just sneaks up on him out of nowhere. 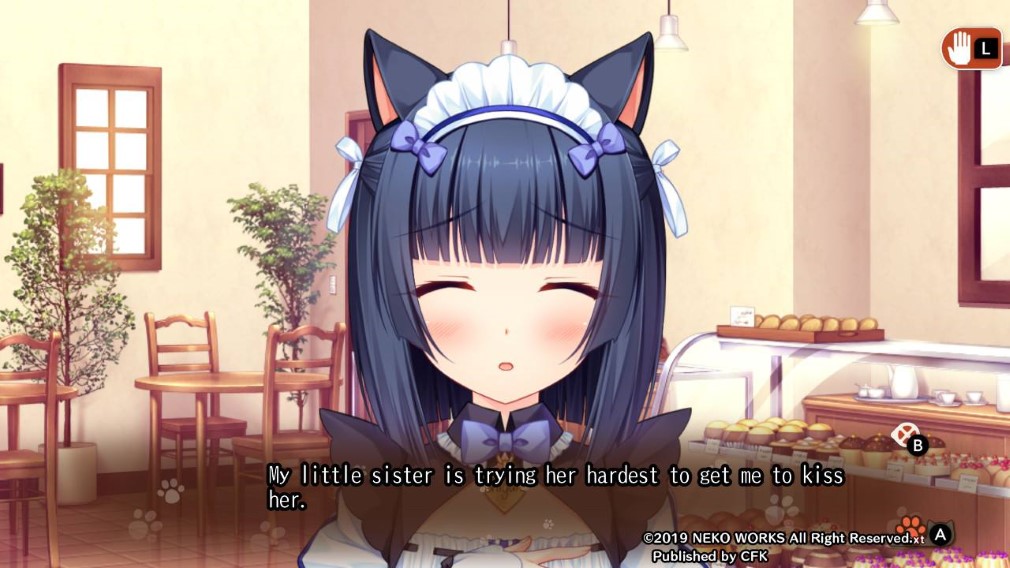 Let's talk sex for a bit. While there's no explicit nudity in the game, there's a fair bit of moaning in the fully-voiced dialogue. On top of that, there's a fair few moments of what is essentially foreplay, including a bit where you clean two catgirls' ears as they rest on your lap.

And as previously stated, this is a more sanitised version than other releases. Large shirts are placed on characters who were previously showing nothing more than shoulders, and a few more buttons have been done up to cover previously seen cleavage.

How much "enjoyment" you get from Nekopara Vol. 2 really comes down to how much you like the idea of boning down with women who have tails. The writing, overall, is pretty standard throughout, even if the plot itself is so thin it barely exists.

But again, don't play it in public. I'm known for playing weird, perverse games on trains - it is my curse as a reviewer that I have to undertake these tasks. But while the Switch may be a portable console, I'd advise you stick to something else while on the move.

Oh, and the bonus chapter reveals certain things around the upbringing of the catgirls which makes the entire Nekopara series extremely creepy and weird, and may well make you feel slightly sick after playing it. So, uh, watch out for that, I guess.