The current Hearthstone meta is control oriented, rewarding decks that generate long-term value. But that leaves a door open for super-aggressive decks that can win games before a control deck can get rolling.

Enter Murloc Mage, a build that was briefly popular in the last expansion. Now it's got some extra tools to play with and the meta has slowed up even more, giving it a chance to shine.

Yes, it's all the Murlocs, even the rarely-seen Murloc Raider. It's a deck where you go all-in or you don't go at all.

In terms of the expensive Legendary cards, you do need Aluneth but you don't need Stargazer Luna. Both are about card draw, but the former does it much better than the latter. 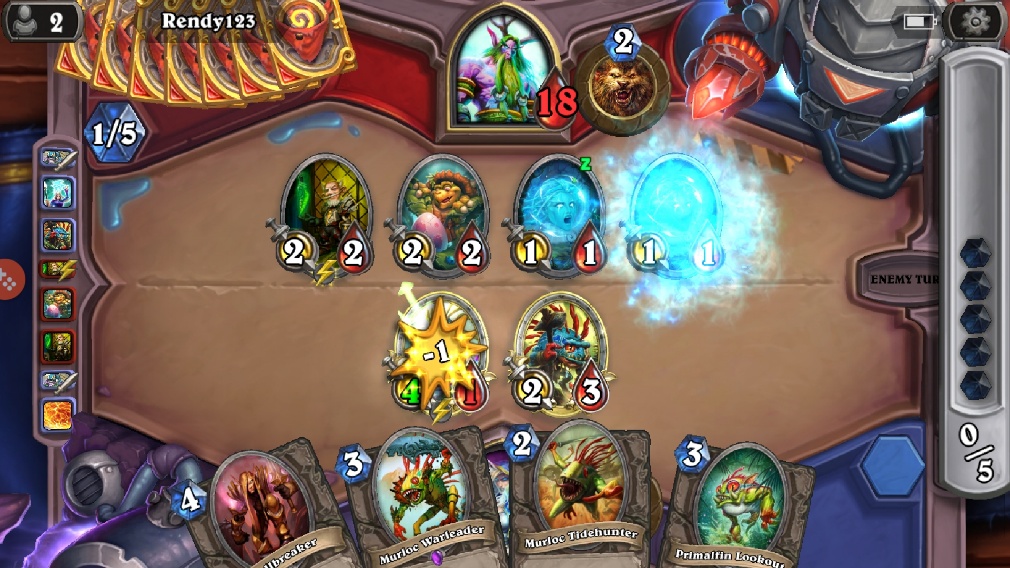 For the epic cards, Murloc Warleader and Gentle Megasaur are both key. They're your buff cards to keep you Murloc tribe alive and hitting hard. Book of Specters is less so: you can replace it with Arcane Intellect if you need to.

Nightmare Amalgam is somewhere in the middle. It's the only minion with Murloc Synergy that has decent stats by itself, so it's a handy addition if you can.

There are lots of useful minions you can choose for replacements if you need them. Spellbreaker, Vicious Fledgling and Fungalmancer are all useful. Try to pick a like for like cost where you can.

With a hand full of low-cost Murlocs, you're often spoiled for choice when it comes to the mulligan. Keep a 1 or 2 cost card if you can, then go fishing.

The top card you want is Murloc Tidecaller. Played on turn one it can almost win a game by itself if your opponent can't kill it quickly. Sadly, most decks can.

After that, your keepers are Rockpool Hunter and Murloc Tidecaller in that order. Hunter is better because it can buff another Murloc, helping it to stay alive.

If you've got a first turn play in hand, consider keeping Aluneth or Murloc Warleader. Both offer massive snowball potential, but it's more important to get board presence established first.

No, really. This deck has nothing to defend itself with. That's it's main weakness. You're at the absolute mercy of anything with a solid area attack or a faster minion swarm.

There are two ways you can approach this, depending on what you're facing. Against midrange deck with board clear, pick health buffs and hammer their face. Most cheap area spells have limited damage.

So with Coldlight Seer and Gentle Megasaur, you've got a good chance of increasing health beyond that range. By the time you're at risk of facing expensive area spells, your opponent is probably dead.

Other cheap aggro decks, however, are your main weakness. Your tribe of Murlocs is synergistic: they need to survive to snowball and thrive. So they're easy meat for cheap minions on the other side of the board.

This is difficult to deal with. Health buffs help again, but they only get you so far. Your only real hope is, counter-intuitively, to trade well rather than going for the face. You need to keep board control and stop them building an army. If you can do this, and prolong the game, your card draw will beat most other aggro builds over the long haul.

So, look for opportunities to take out enemy minions while leaving yours alive. At the very least, trade your cheap minions at a beneficial cost ratio. Sequence well to maximise your buffs and you might just get away with it.

In most other cases, your game plan is very simple. Throw Murlocs down as fast as you can. Then smash them into your opponent's face while drawing more Murlocs. Mage currently has a plethora of card draw options, and that's what makes the deck work.

The ideal world is to play on curve. Do this, with a turn 3 Warleader and a turn 4 Megasaur and it's possible to win at that point. If the Megasaur rolls Windfury at that point and most of your Murlocs are still on the board, it's game over for them.

Even if they survive that you've probably hurt them to the point where you can finish them off with direct damage. And this being a Mage deck, there's plenty of that around to oblige. Don't be afraid to spend a Frostbolt early on a minion though, if it keeps your Murloc snowball alive and growing.

It's not all mindless carnage, though. In reality, most decks will start eating into your Murloc horde before then. Try to predict how your opponent might counter your growing horde.

Often, by turn 4, it's better off playing a Coldlight Seer or picking a defensive bonus from the Megasaur. It's all about keeping those innocent Murlocs alive so they can buff each other into a killing frenzy.

You also need to pay attention to timing your card draw effects. You'll run out of Murlocs very fast. Sometimes it's better to play a draw spell early and suffer the lull in tempo to redouble it a turn later. This is especially true if you're running Stargazer Luna. Keep her alive and sequence your plays well and you can draw cards as fast as you can play them.

Asphalt 9: Legends cheats and tips - A full list of EVERY car in the game