I've often wondered what a real life game of Windjammers would look like. In reality, the sport would perhaps have a hard time retaining players (read: keeping them alive), due to the fact that the premise hinges on two massively powerful individuals throwing chunks of metal towards each other at incredible speeds. So maybe not a great idea, then.

Though the game, originally released back in 1994, might be categorised as a sports title, in practice it feels more like a sped-up and vicious version of Street Fighter. When I say vicious, I don't necessarily mean gory or excessively violent. I mean that you will absolutely feel - in the pit of your stomach - the weight of every impact, throw, and explosive special move.

Matches don't take long to morph into these ferocious ordeals that, especially from an outsider perspective, could appear somewhat incomprehensible. But in the moment, players are entirely connected to every decision being made.

It's not only reaction times that are being tested here, though. Rounds can be won or lost just because you broke from your opponent's rhythm and therefore threw them off, and online play demands a thorough understanding of every tactical opportunity available to you at any given moment. 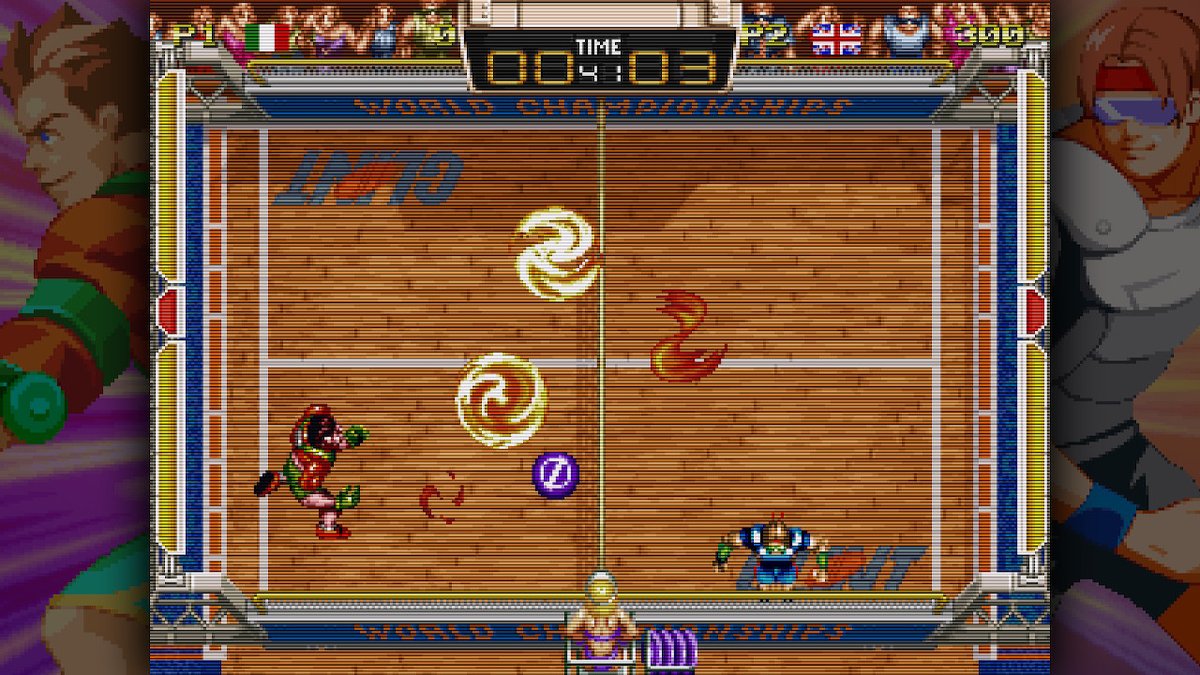 The number of these moves and skills on offer isn't exactly huge, but they can feel almost limitless in their applications.

The six different arenas all have their own little quirks, with simple obstacles and changes made to goal positioning that nevertheless manage to cultivate inventive playstyles.

It's for these reasons that rallies are both a test of attrition and smarts, with small gestures often resulting in huge, round-ending consequences.

It also helps that Windjammers has charm to spare. Characters are all memorable, with their various eccentricities and little catchphrases helping to turn the game into a tasty shot of 90s nonsense.

Even by the standards of a Neo Geo release, the visuals aren't exactly pretty. Though why be pretty when you can be utterly distinct? Yes, you could call the game's look garish, tasteless, and painfully 90s, but that's just part of its appeal.

In terms of the remaster, not much has been altered or added. The new design of the menus is all well and good, and switching between the visual filters is a nice touch, but it really could have done with a few more mini-games or maybe even some additional arenas.

I understand the mentality behind leaving most of the game untouched, though this decision does make the re-release a far less interesting proposition for returning fans.

In all honestly, though, these gripes hardly matter when you take into account the quality of the core game. From the music to the punchy effects work, the differing feel of each character to the rapid-fire pacing of every match, Windjammers gets it all right.

It's a prime example of a simple concept executed with precision, a sense of giddy delight, and an expert understanding of competitive play - it's just brilliant.

Windjammers is one of the finest co-op games in any genre, and it remains as essential now as it was back in 1994
By Cameron Bald
| Oct 29, 2018 |
Switch
Find out more about Windjammers