Runefest 2018: Love, swords, games, and music in the heart of middle-England

That boat was in Game of Thrones

What are the most important parts of a modern MMO? You could argue it was fighting, exploring, even grinding. You could point to fetch quests, to raids and dungeons, even PvP or massive open worlds full of possibilities.

But you'd be wrong. The core of the modern MMO has nothing to do with pixels, polygons, NPCs, or cutting the skin off of strange animals in order to take their hide to a creepy man sat outside a hut.

The heart of Runescape is somewhere else, away from the mechanics and levels, and away from the fact that there are two distinct versions of a game that in its lifespan has earned a billion dollars in revenue. 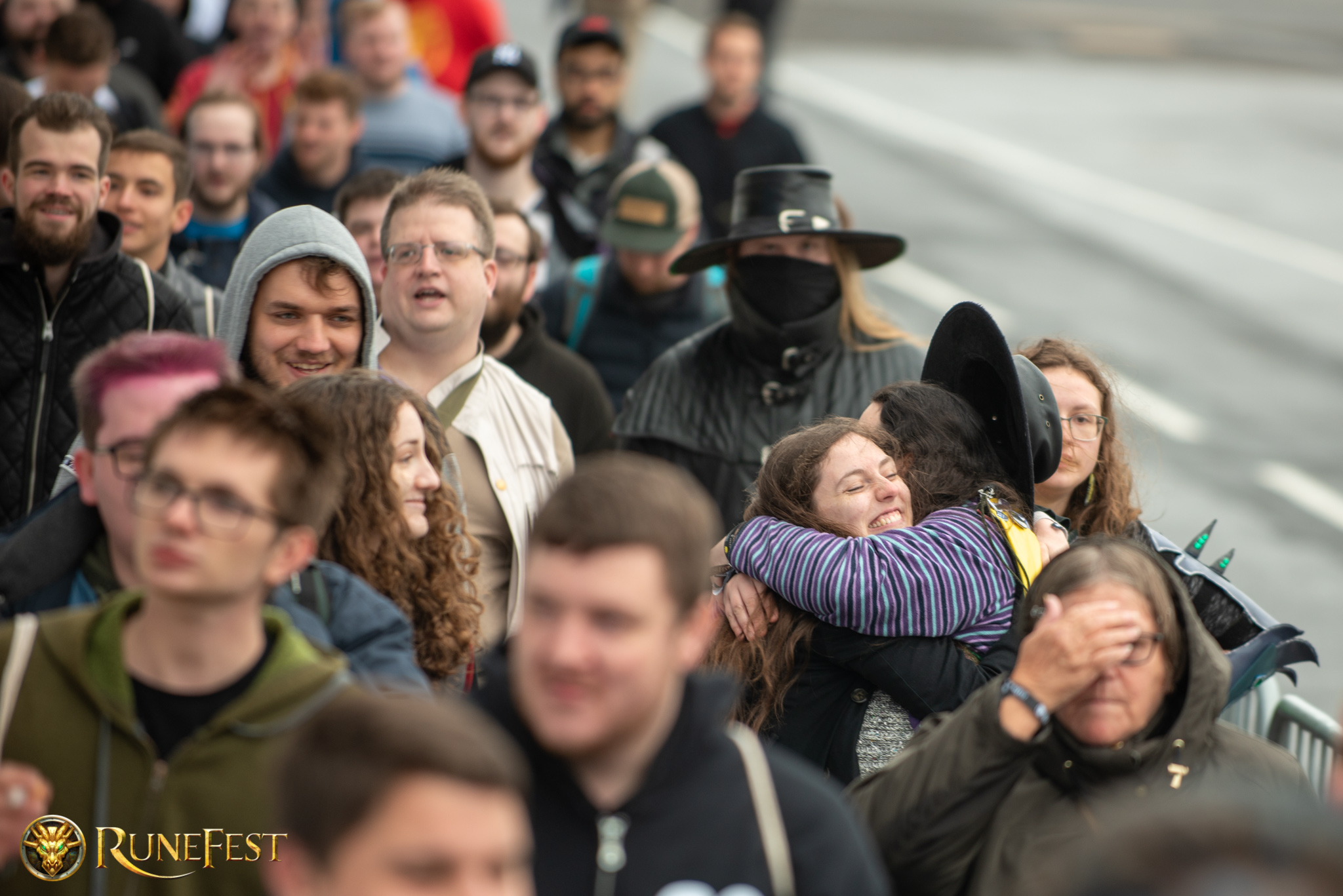 Right now the heart of Runescape is in Farnborough, just next door to one of the busiest private airports in the UK. As celebs touch down on the runway, private jets growling through the mild October air, something rather special is happening just across the road.

An MMO might be built of all the things we've mentioned, but it's not sustained by them. Those are the atoms that make up the body, the little bits that work exactly how they should, exactly when they should.

You can stitch these together into an experience that people are going to enjoy, but in the world of MMOs, enjoyment isn't enough. You need your players to invest their time, their energy, and above all their passion.

Runescape offers a landscape of choices, but it's the people who make them - the community - who are the essential ingredient in the MMO pie. And if you measure a player's position in that community by their level of fanaticism, Runefest attendees definitely take up the higher echelons.

You might never have heard of Runefest, but in a way it's one of the most important gaming events on the calendar. Not just for players of Runescape and Old School Runescape, but for anyone looking to better understand what it is that makes gaming such a fundamental 21st century pastime.

If quests and dungeons are the body of Runescape, then Runefest is its soul.

"There will be tears tonight"

These questions are at the centre of modern life. How do you create an identity when your stories and adventures happen in an existential grey area? Runefest is those questions made physical. It's an answer for 1700 people from all over the world.

The event starts on Friday night in a hall at the Farnborough International conference centre. On stage is the Royal Philharmonic Concert Orchestra. They play for a couple of hours to a rapt audience - tunes from the game turned into something tangibly cultural. 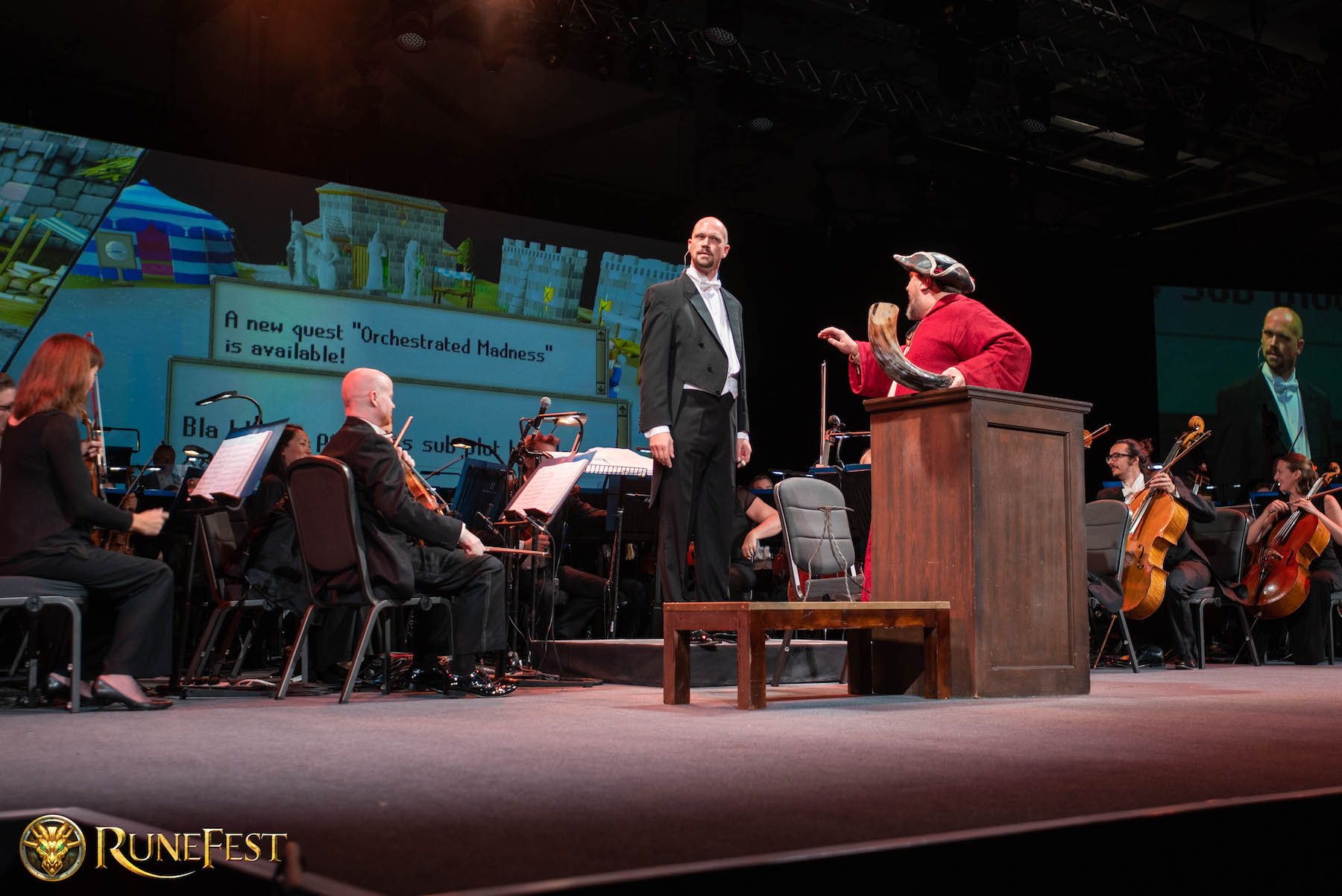 It's Runefest encapsulated in symphony. The game has enough tunes to choose from - it currently holds the Guinness World Record for the most original music in a videogame.

Some players are dressed as their characters. Others are wearing shirts emblazoned with their in-game name. People who haven't seen each other for a year, who live on different sides of the planet, hugging like veterans who share a secret they'll never tell.

I meet a man from Norway who's spent 300 hours creating his costume, a married couple from Texas who are at Runefest as their yearly vacation. A pair of brothers - one a fan, one essentially an enabler - wander past a man with an enormous sword balanced on his shoulder.

There isn't just a palpable sense of excitement in the air, there's something else, something harder to put your finger on. Sure there's the occasional whiff of spray paint or glue as a hulking warrior or fake-bearded mage walks past, but the atmosphere is all about a commonality of experience - this is a room full of people gathered together for one single purpose. 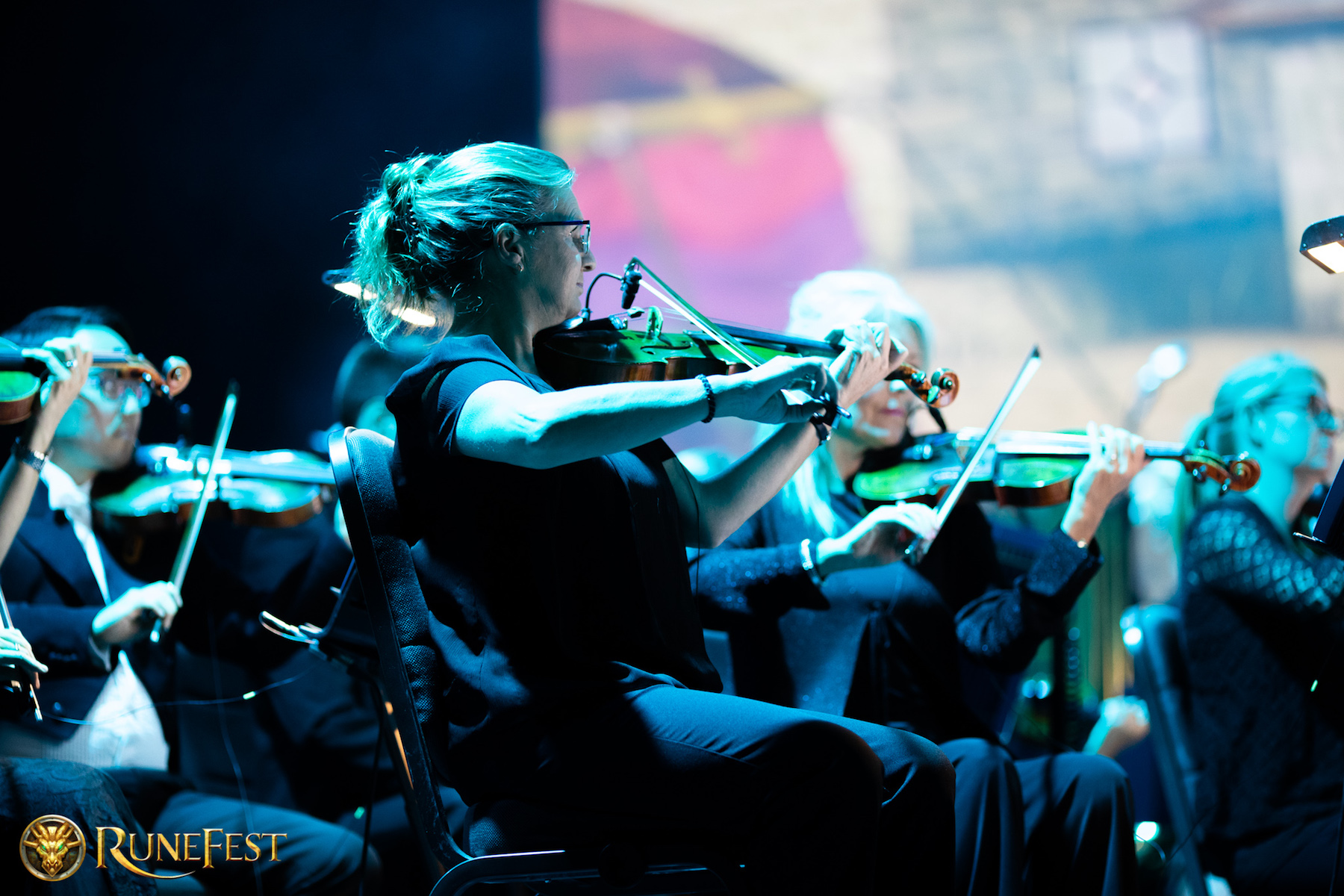 I've been to gaming events before, plenty of them, but Runefest is unique among them. In other places the gaming is key - players go to Gamescom or E3 to get their hands on a multitude of different upcoming titles. Elsewhere business is at the fore, but Runefest feels like a singularity - a focal point drawing people in with an almost unshakeable pull.

This isn't a relationship that only goes one way either - the team at Jagex are just as excited about the event as the gathered crowds. That passion is nurtured at every turn - it's the base code of Runefest, the base code of Runescape, and the base code of the company. If you were only allowed a single word to describe the experience, you'd probably go for love.

Friday dissolves into a blur of conversations, hugs, and stolen cigarettes. It feels a little like I'm peering over the garden fence into someone else's party. I'll admit I've played very little Runescape, and half of the chat flies past me.

But there's such an openness to everything and everyone that it doesn't matter that I don't know what comped means or prayer pots are, or that there's a rubber duck in the bags that are given out to attendees and I have no idea why.

"The very road I needed to cross"

On Saturday attendees are let into the main hall of the show. The first thing they see? A viking long boat, apparently famous for appearing in Game of Thrones. Next to it steam slowly rises from the swampy edge of a river.

Deeper in there's a blacksmith showing his wares, tying into the newly announced changes to mining and smithing. A mountain range sits at the back of the room, and inside there are playable versions of Runescape and Old School Runescape on mobile.

This isn't just an aesthetic, there's a practicality to the design. Players are set quests they can complete in the arena, and there are special prizes for completing them. On the main stage there are quizzes, reveals, and more. It's the community that's front and centre in everything that's happening here.

That communal thread is key to Oldschool Runescape as well. Content only makes it into the game if it's voted for by 75% of the player base. If they don't like what's being offered, it doesn't make it into the game. 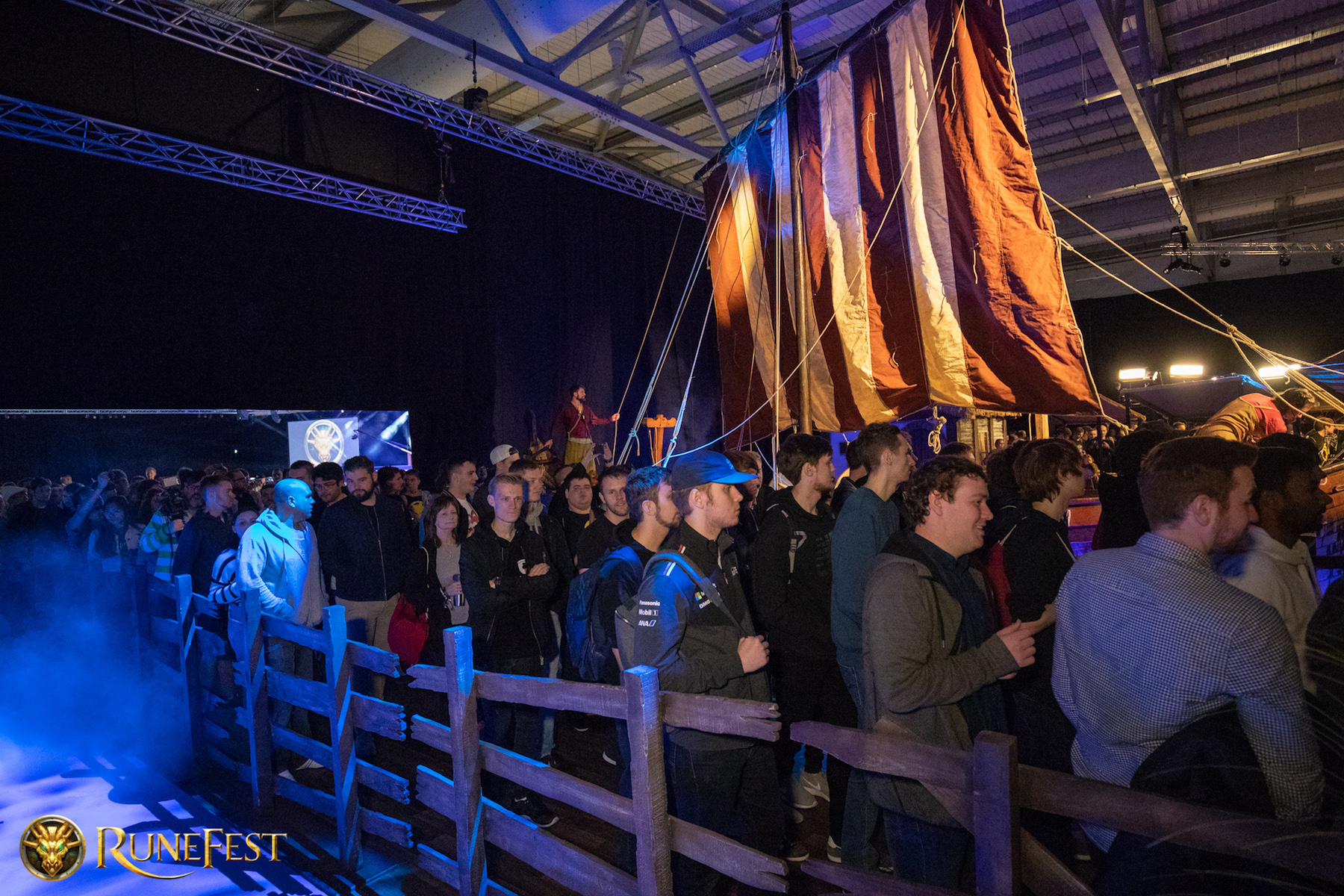 One of the biggest queues is for what's essentially a photo booth. The images are then connected together to make a wall of faces, each of them also part of a bigger landscape. Runefest likes to provide curious journalists with physical metaphors for its ethos at every turn.

Then there's the story of the American who travelled all the way to Farnborough for the show, only to get involved in a car accident on the last road he had to cross. He's visited in hospital by a member of the Jagex team, and while he might not have made it to the event, he leaves with bags full of free, exclusive swag.

"We could do it at my flat next year?"

Love, real love, is weightless. You carry it with ease because it's part of you. It's difficult to comprehend, and sometimes it can be unnerving when it creeps up on you, but it makes your life better - it enriches every second of your existence. 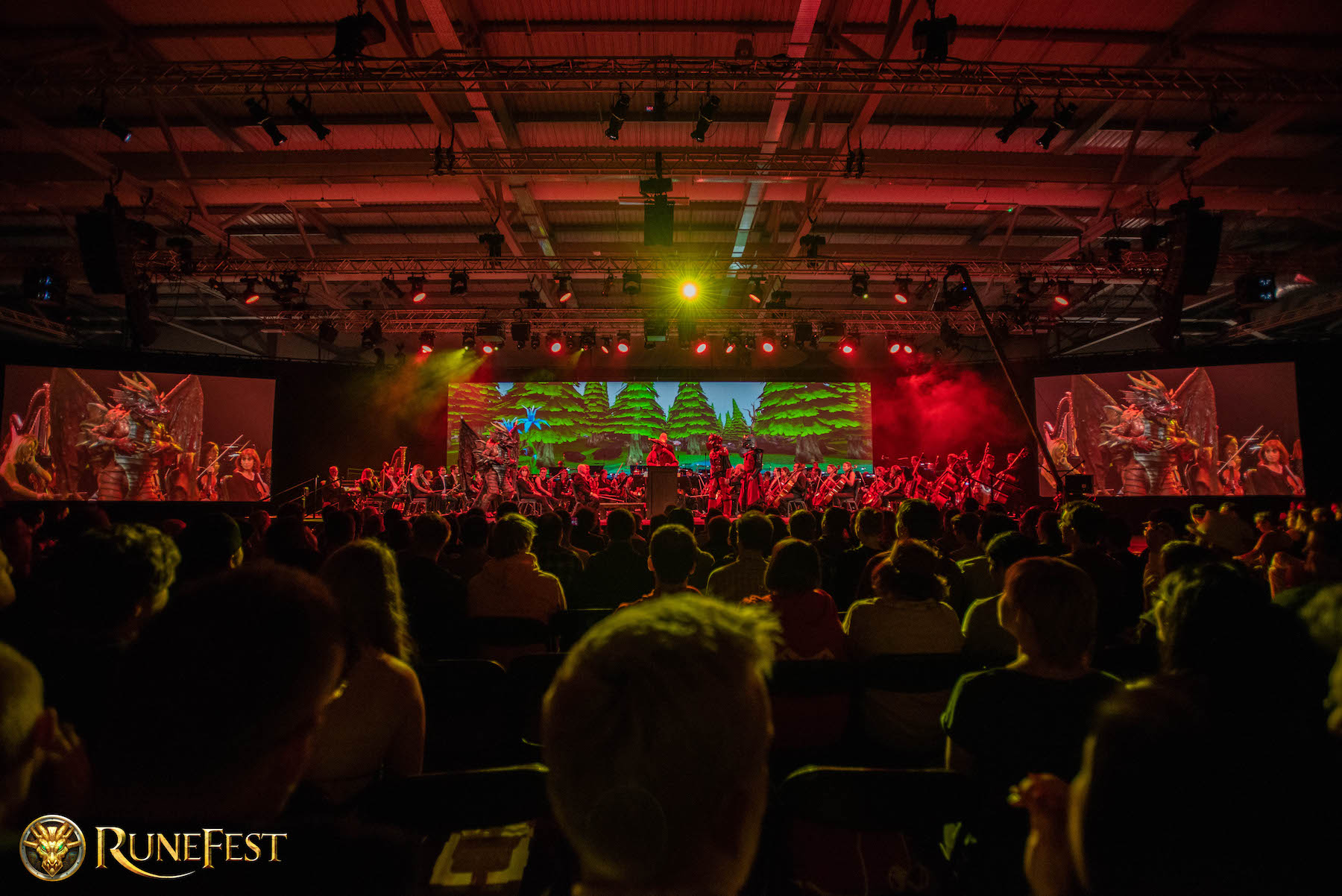 And it's the reason everyone's here. That's a painfully beautiful thing to deal with when you're not sure if you've dealt with it before.

I'll be honest, I still don't understand Runefest. And part of that is because I don't think I've ever been passionate enough about anything to give so much of myself over to it. In a way I'm jealous, but I can tell you one thing for sure - I'll be here next year, trying to understand it all over again.

All photos provided by iEventMedia

Prepare for chilly weather with the Fortnite: Deep Freeze Bundle