FusionPlay Heroes is a card battler with real cards

Chipped cards means your deck interacts with your phone: hands on at Gamescom

One of the most intriguing games we played at Gamescom last month was FusionPlay Heroes.

A two-player game that mixes real cards with an Android app, FusionPlay Heroes springs from the Imagination of lead game designer Konrad Kunze and his team.

Each player gets a deck of seven embossed cards, that come in smart metal tins. You place one device on a couple of (patent pending) plastic stands, also called trays, between you. Then you slide your chosen card under the phone in order to fight.

It's quick, smart, and bridges the gap between classic tabletop games and apps. The cards are expensive to make so it's not a deck collecting game in the traditional sense, although booster packs will be available.

We spoke with Konrad Kunze and he talked us through the background. And here's the new gameplay trailer to watch, too. 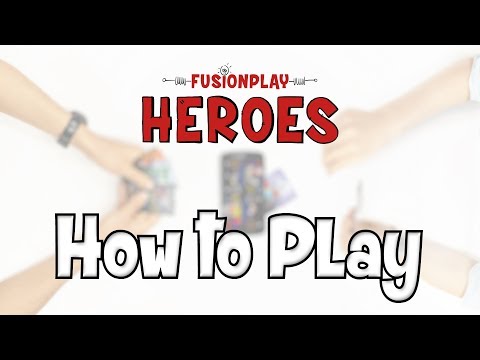 Subscribe to Pocket Gamer on
Pocket Gamer: When did you first conceive the idea? We understand it took a long time to come to fruition. Konrad Kunze: It was 2012 that I had the idea for a near-field communication [NFC] card battle game that lets two players fight against each other with NFC cards and a smartphone app. As a passionate game designer, I just wanted to combine the complex possibilities of video games with the face-to-face experience of traditional board and card games. NFC seemed to be a great way to do this. I showed a very early prototype to my boss and he immediately loved it. Although it included physical and digital parts, it was fast, reliable and it just worked. Additionally, as it only requires few cards compared to trading card games, the estimated costs for the NFC cards would not be totally out of scope.

We set up a small team and started developing this as a full game. By some lucky coincidence we then came together with [German games publisher] Schmidt Spiele and Disney. Both of them loved the idea and we worked very well together. We really learned a lot from this phase of the development and the game grew up and become a true product.

Unfortunately when Schmidt Spiele revealed this internally to its target audience, the response was not as good as expected. So we both decided to go our own ways. We then looked for a new target audience and a matching theme that suits the game best. We partnered up with the manufacturer of the cards to work more closely together. From that point on, it was our shared project and smart-TEC (our partner) and we both put all our passion into the product.

One example are the smartphone trays, which had more than 10 different iterations until we were finally happy with the result. Not speaking of the cards themselves. Smart-TEC did a great job with making the cards look great, be sturdy and still have this great technology inside.

As this is our first physical game we are releasing, a lot of things are new to us and took much longer as expected. One example is, that we totally underestimated European CE certification. Another example was patenting the game concept. But now everyone is absolutely excited to finally bring the game to the public this fall.

What's your vision for fusing the real with the virtual?

The brand FusionPlay was born because our games want to merge the real and digital world. For example our VR game Konrad the Kitten makes a plush toy of the player become a virtual reality kitten that he can actually lift, touch and cuddle. For FusionPlay Heroes, it’s the NFC cards that merge the real world and the digital world. But these are only two examples. We also have concepts for NFC boardgames and other NFC cardgames as well. What all of them have in common is that they combine the best of two worlds. But there is always one important principle we have: it always needs to have a reason to include this technology.

We don’t want to just add an app to an existing card game because apps are cool. When we do such a concept, the app needs to be an inevitable part of the game. FusionPlay Heroes would lose its unique fast gameplay when you remove the app and solve everything the app does with lots of dice, tokens and markers. On the other hand, when you remove the physical cards, you’ll loose the haptic experience and the "sitting together at the same table" feeling that we definitely wanted. We want people to look into the opponent’s face when they trigger a combo or maybe just bluff.

In our hopes for the future, FusionPlay Heroes is just the first game of a whole new genre of NFC games that brings together the best of video games and traditional games.

What were the technical challenges involved?

We were very lucky that we had smart-TEC as manufacturer for the NFC cards right from the beginning. With their experience, they cared about the NFC cards and how to best produce them. Some things that we discussed during the development phase were: the type of the NFC chip that is built in, the size of the antenna and the way the cards are cut. Usually playing cards are stamped out from their sheets but this will result in uneven quality for cards that consists of multiple layers. So smart-TEC had the idea of cutting the cards with a laser. That melts together the edges and also gives the edges of the cards a great "smoky" look.

For the antennas we went as large as possible. The antennas are nearly as large as the card itself to get the best recognition speed and accuracy from the smartphone. In the research phase, we tested a lot with different chips and antenna sizes and then talked together with smart-TEC about the results. Finally the cards are really durable, sturdy, have good recognition accuracy and look great. As the last step, we added some cool print coating that make you feel the effects on the cards when your fingers slide over them. This was done to underline the value of the cards. In the end it’s not just a card, instead it’s a piece of high-tech that took a lot of effort to finally look and feel like just a playing card.

Besides this, we experimented a lot with the smartphone trays. Although they might look simple, they are very important for the fluid and extremely fast gameplay. Early versions looked like small tables made of plastic but as they were fixed in size, they did not match all smartphone and tablet sizes. We built the prototypes in different ways, most of them came from 3D printers which was a good way to try out different ideas. After some time we liked a version that used two separate benches most. You can position them in many ways and to work with any size of device. They are also small enough to be put inside the metal case that comes with the cards to have it always with you. But as they were always pushed away when playing, we then ended up with rubber coated feet of the smartphone trays. Now the final version is made of Plexiglas and printed. So they not only work great but also look nice.

Can you tell us which is your favourite character or card in the deck?!

My personal favourite character is "Donar". I just love the god of thunder looking like an annoyed little dwarf. (All credits to the artist Christine Faust!) I also like that he is the only character that can cause a debuff that blocks The energy regeneration of the enemy. As energy management is a crucial element of the gameplay, this is an ability that is very often underestimated.

Regarding the cards, I think I like "Vital Spot" the most. Not only because of the evil description text and the look on Shieldalot’s face, but also because it uses dexterity twice to enhance the damage. There are some tricks to raise the dexterity of Shieldalot when playing and this makes "Vital Spot" extremely dangerous. Just try the "My Noble Ancestors" combo and then "Vital Spot". This will really hit hard.

The FusionPlay Heroes team are working with a small chain of local German retailers and with two online shops currently. From early October the cards will be available via www.getdigital.eu and via www.gate-to-the-games.de for players everywhere to purchase. At launch time, there will be three products available: The Starter Pack including the manual, the smartphone trays and the heroes Sir Shieldalot and Donar. You will also be able to pick up two additional Hero Packs, each containing all cards for a new hero. These additional heroes will be Kim Oh No and the duo Titchy & Snooks. These two heroes are more complex to play and bring additional variety to the standard game. These packs are not random boosters like you might expect in a traditional trading games – they are more like add-ons, and each pack contains everything you need to play for the specific hero.

What do you think? Do you like the sound of a game that combines physical playing pieces with an app?