Golfing Around review - "A Colin Lane game that takes a sport seriously?"

After hacking through ten shots in a stand of trees next to the fairway, it became pretty obvious that Golfing Around doesn't follow the same formula as Colin Lane's earlier games.

This one has its tongue firmly pushed into the roof of its mouth, a look of concentration etched on its adorable cartoon face.

But that lack of silliness isn't a detriment to the experience. Instead, it shows a developer who isn't afraid to move into new territory, and one who's confident enough to make the end result worth playing.

Essentially the game is a pretty straight golfing simulation. There are three nine hole courses to work your way through, and your aim is to beat the par score as best you can.

Playing in portrait mode, you can control everything with a single hand. There are buttons that let you aim your shot, then a gauge that allows you to set the power before releasing and thwacking the ball.

Another button lets you get a zoomed out view of the hole you're playing on. You can still angle your shots here, and it's really important when you're shooting for something you can't see. 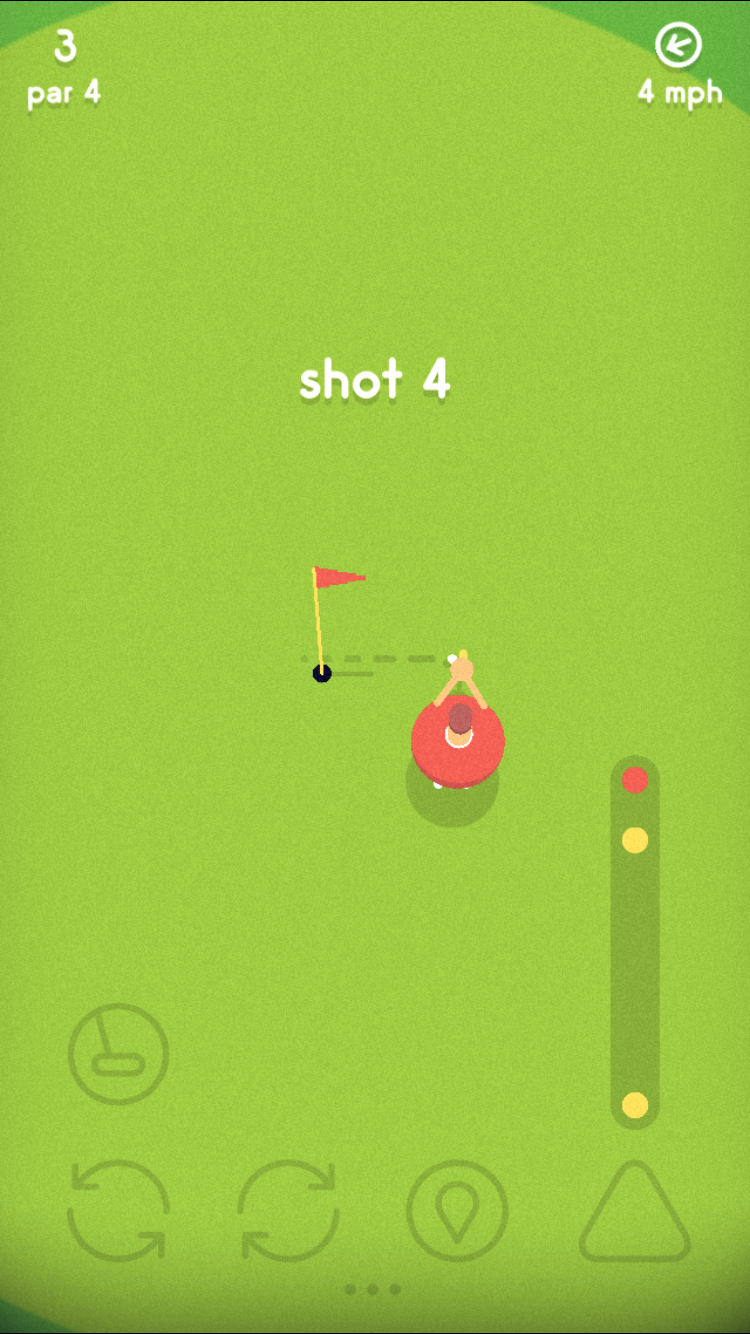 You can also swap out your clubs. This changes how far you'll hit the ball. On the zoomed out view you can see where the game expects the ball to land if you give it the hardest hit you can control, and where it'll land if you smash it as hard as possible and hope for the best.

There's wind to take into consideration as well. Get onto the green and you need to be far more subtle in your approach, pushing the ball towards the hole rather than giving it some welly.

The courses are well designed and offer up some challenging shots, but the real jewel of the crown here is the level editor. Here you can make your own shots and play them with the world. Player-made levels mean there's always something to do when you've perfected the bundled courses too.

No, this isn't a game that's going to have you rolling on the floor with laughter. What it is is one of the best golf games we've seen on the App Store for a good long while.

Not only is it presented with a great deal of love and care, it also throws in some new ideas that set it apart from the rest of the pack.

It's not what you'd call an adult game, but it definitely shows that Colin Lane has the skill to create more mature games. And while hitting an octopus in the face with a ball in Battle Golf is fun, Golfing Around definitely has way more staying power.

Golfing Around might lack the madcap nature of Colin Lane's earlier games, but the extra depth here makes it well worth checking out
By Harry Slater
| Aug 30, 2018 |
iOS
Find out more about Golfing Around

FPS.io will be mixing two of the biggest genres together on mobile this October