This isn't even my final form

UPDATE: Looks like that CoroCoro article was definitely onto something. Nintendo’s featuring Mega Evolutions and a few familiar faces in Pokemon: Let’s Go, Pikachu and Eevee in an all new trailer.

The trailer pretty much confirms everything we learned from yesterday’s magazine article. Venusaur, Charizard, and Blastoise show off their Mega Evolutions, and we get a peek at Vermillion City and resident gym master Lt. Surge. We get to see the interior of the S.S. Anne a bit, too, which sure has us feeling nostalgic.

The original article follows below.

According to the most recent issue of CoroCoro magazine (and a helpful scan from long-standing Pokemon fansite Serebii), Mega Evolutions could very well be making a return in Pokemon: Let’s Go, Pikachu/Eevee. The magazine doesn’t tell us how Mega Evolutions will work in the Let’s Go games, exactly, although it’s definitely possible it will stray from the 3DS games a bit, as Pokemon: Let’s Go, Pikachu and Eevee are lighter reimaginings of the classic Pokemon games. CoroCoro shows the Mega Evolved forms of Venusaur, Charizard, and Blastoise, though we’re hoping other Mega Evolutions will be making an appearance too. 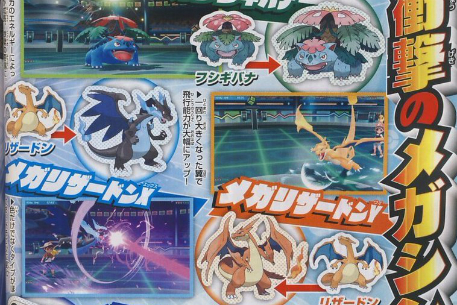 These extra special evolved forms first debuted in Pokemon X and Y, and have stuck around since. Players equip their Pokemon with a Mega Stone, and can then Mega Evolve their Pokemon once per battle to unlock ultra powerful moves and stats, as well as a new appearance. Only a certain number of Pokemon have Mega Evolutions.

Let’s Go, Pikachu and Eevee arrive on Nintendo Switch on November 16. While you wait, why not check out our preview of the game?