Holedown review - The rymdkapsel dev takes on a casual game

By Harry Slater
| Jul 26, 2018
iOS + Android
|
Holedown
Get Holedown on...
Find out more about Holedown
Available on: iOS + Android

Holedown owes as much to the super-casual mobile stylings of Voodoo as it does to Rymdkapsel dev Grapefrukt's earlier work. It's charming and esoteric for sure, but at it's heart it's a game about bouncing balls around.

But there's a little bit more of everything here than you'd get from a hyper-cas blast. And that makes for a far more gratifying, if slightly less compulsive, experience.

The game is about mining your way through a series of stellar objects. You control a rain of balls that dart out from the top of the screen, following the path you've set out for them. Think of upside down Puzzle Bobble and you're getting it.

Below there are blocks you need to chip away at, each with a number on it. These numbers represent how many times you need to hit a block to clear it from the screen. If a block reaches the top, it's game over.

Some of the blocks will fall when the ones underneath them are cleared. Others, marked with a white X, will stay stubbornly in place until you've blasted them out of existence. Then there are the diamonds. 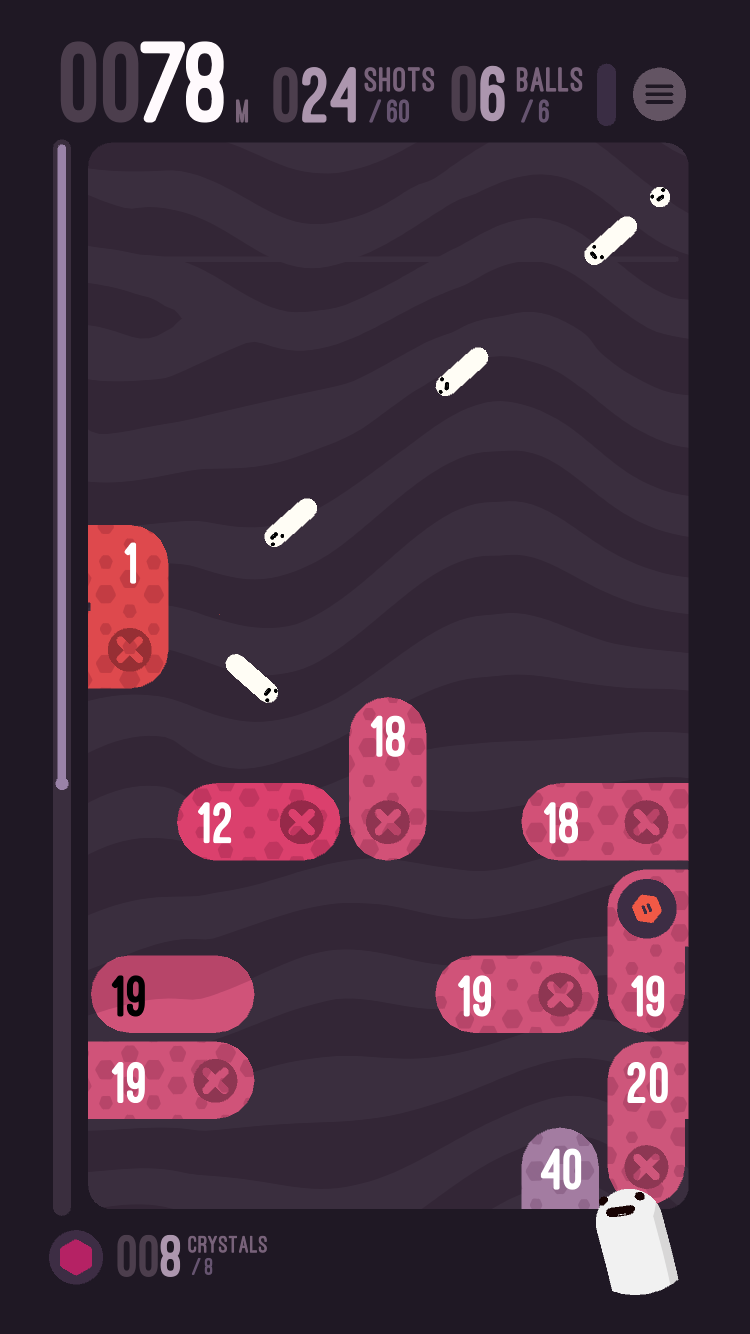 You collect these as you play, and you can spend them on upgrading your mining equipment. You'll add more balls to your starting shots, increase the number of shots you can take and the number of balls you can earn, make your hold bigger so you can collect more crystals, and eventually buy mining licenses for new and more lucrative rocks.

You'll only be able to do the last of these when you've smashed the core of the previous level though. These are stationary circles with huge numbers on them that essentially serve as the game's boss fights.

There's a decent beat to the play here, moving you forwards with that play-upgrade-repeat stomp that the best mobile games tap into.

Is it as addictive as some of the less complex games that deal with similar ball-and-block play? No, probably not, but the extra depth means you're going to be having a far more rewarding time. This isn't a brainless game by any means, and that's definitely to its credit.

Holedown is a sweet and satisfying game of shattering blocks. It's like a casual game for grown-ups and people with attention spans, and I'd definitely suggest you go and check it out.

A casual game that's got a good deal more going for it than the rest
By Harry Slater
| Jul 26, 2018 |
iOS + Android
Find out more about Holedown

Martin Jonasson's new game looks really awesome, and it's coming out this month