Captain Toad: Treasure Tracker was built with the Wii U hardware in mind, but in certain ways it feels like the quintessential Switch game.

This is an unusually proportioned two thirds-fat effort from Nintendo. It's caught somewhere in between a premium mobile game and a full retail console game in concept, scope and price - though it's closer to the latter.

Sounds perfect for Nintendo's hybrid handheld console, right? Not quite, as it turns out. But it's not far off at all.

This spin-off from the Mario universe (Super Mario 3D World, to be specific) casts you as the famous plumber's adventurous buddy, Captain Toad. Just as with his role in Super Mario Odyssey, CT makes up for a lack of mobility with an intrepid spirit.

This duality forms the basis of Captain Toad: Treasure Tracker's gameplay. Each level is a compact, self-contained yet deceptively layered diorama that can be panned around with the right stick. 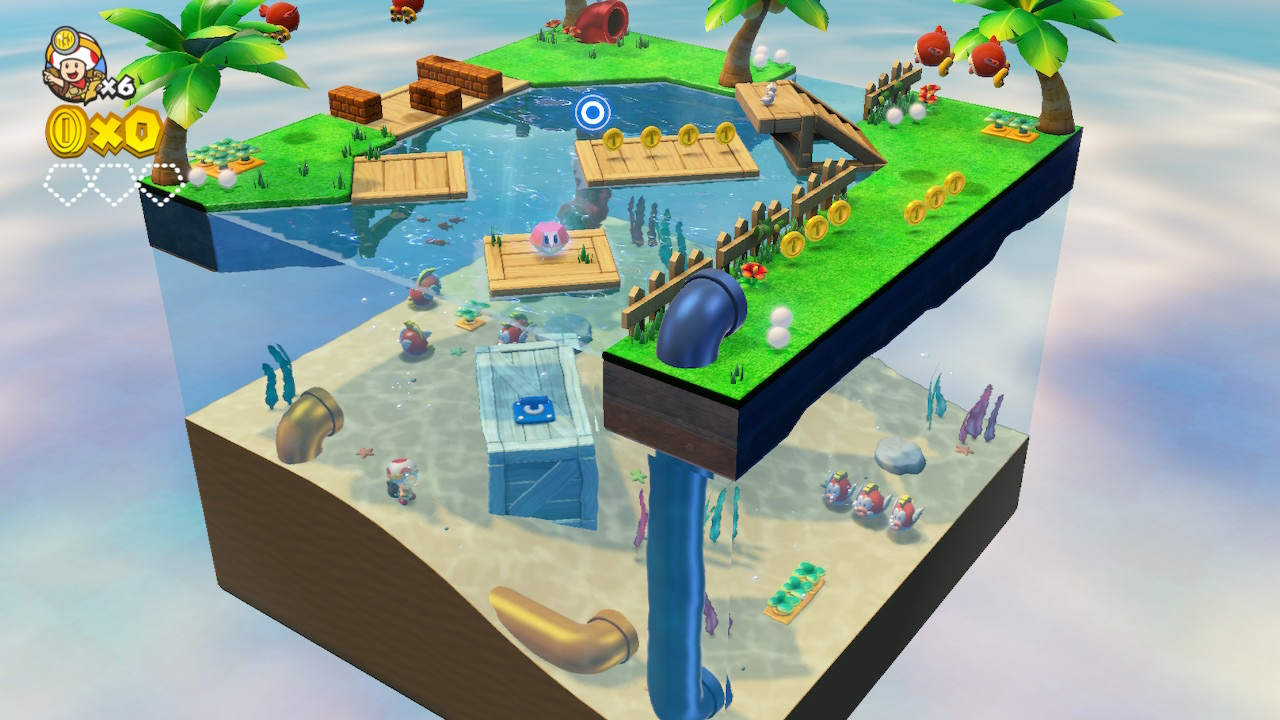 Toad and his playable companion Toadette are slow and incapable of jumping, but they can pull levers, scamper up ladders, and pull up bonus-giving vegetables from the ground.

If you land yourself a turnip, you can even take out one of the familiar enemies that patrols each stage.

Toad's limited move-set doesn't feel restrictive, however. That's because Captain Toad: Treasure Tracker isn't really a platformer so much as a perspective puzzler.

Mechanically, it's got more in common with Monument Valley than Super Mario Odyssey. 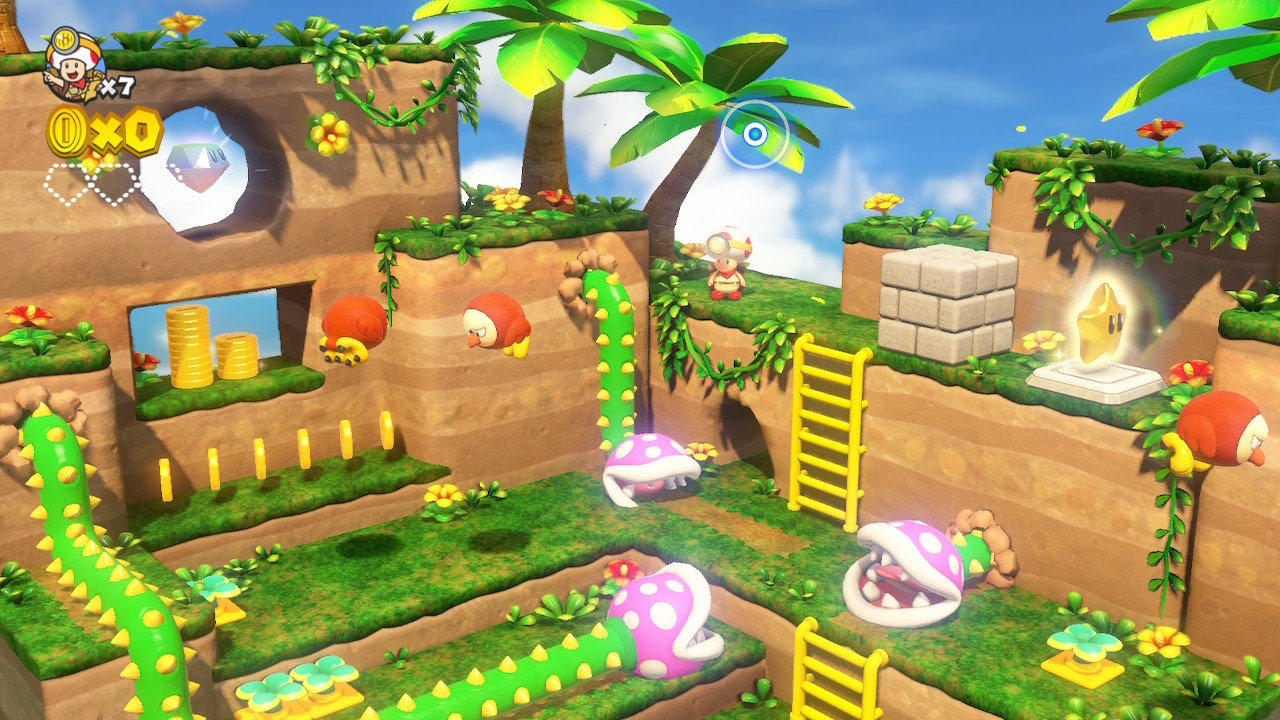 The goal of each level is to snag the golden star, but there are also three hidden gems to collect, as well as a bonus condition to be met. You might need to find a hidden golden mushroom, avoid damage, or collect a certain number of coins.

Playing a level of Captain Toad: Treasure Tracker properly involves panning around to look for hidden doors, tell-tale switches and suspicious mechanisms. It's almost like a hidden object game at times (there's even an optional find-the-Toad round for each level), but one in which you have free reign to wander around the scene.

It's a very simple, rather rigid system, but Nintendo throws in plenty of diversions to keep things fresh.

The interactive points within the levels can vary wildly, too. Some levels let you interact directly with parts of the world, sliding platforms around like you're in a mobile block puzzler. 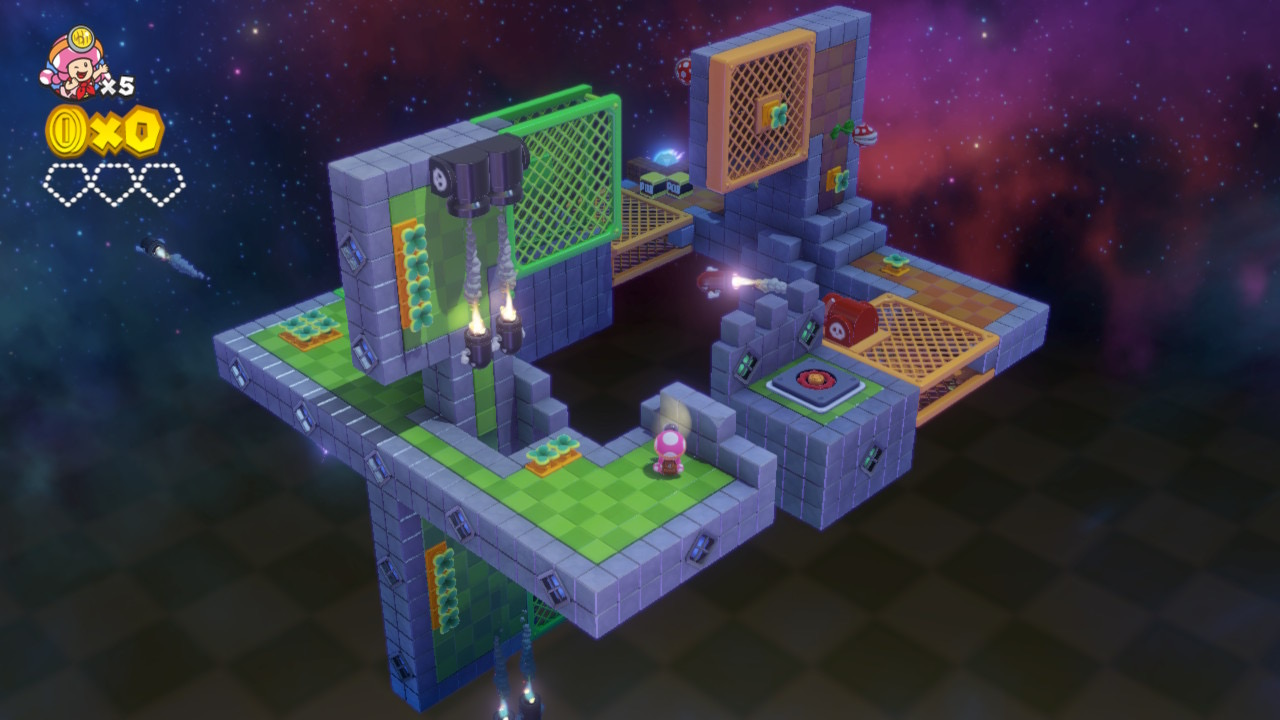 This aspect was designed with the Wii U's touchscreen controller in mind, and so it works very well on the Switch's own touchscreen. On your TV, however, you have to use your controller's gyro and tilt to aim, which feels rather awkward.

That's a shame, because Captain Toad: Treasure Tracker is a beautifully sharp, vibrant game that really benefits from being blown up to a 1080p display.

You spin me right round

One happy spinoff of this less-than-ideal control work-around is the added provision of a two-player co-up mode.

This essentially splits the controls between the two Joy-Cons, with one player controlling Toad and the other a motion-controlled pointer. Player two can collect coins and stun enemies, but the most interesting aspect is that they also control the camera.

Have you ever tried to share a control pad in a single player game, with one of you handling movement and the other the action buttons? Captain Toad: Treasure Tracker's two-player mode isn't quite that awkward, but it does require a similar type of communication, and raises both the frustration and humour levels accordingly.

These mushrooms are filling

Some have complained that Captain Toad is a little slight, but I don't really see it that way. Sure, its 70-odd levels are compact, snappy, and can each be run through in a matter of minutes.

But the game as a whole is like one of its levels writ large - ostensibly straight forward, but constantly expanding and looping back on itself. 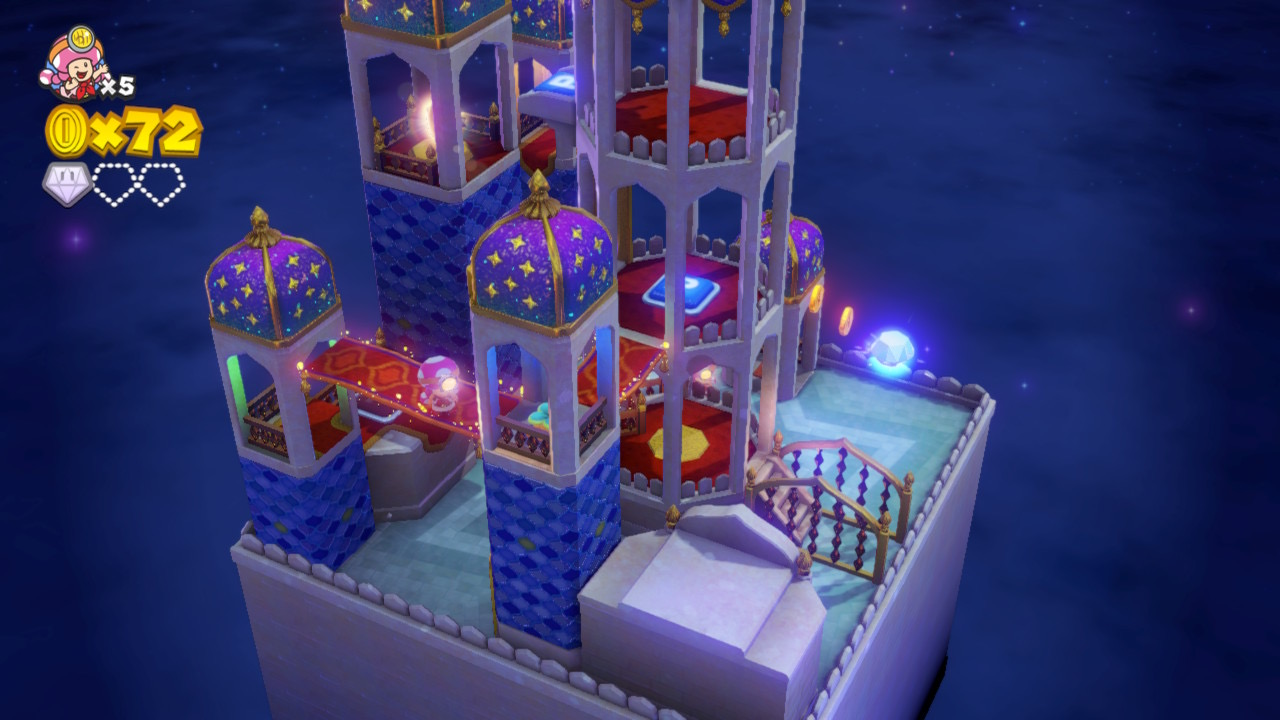 You'll find yourself diving back into levels to find every last secret, or tip-toeing through the more complex ones in the name of thoroughness.

And besides: this isn't priced like a full-sized game. Of course we'd have preferred it to be the south side of £30/$35, especially as it's not a brand new game, but the quality of the content can't be denied.

If you rinsed Captain Toad: Treasure Tracker on the Wii U, it probably isn't worth a second purchase. Nintendo has swapped out some of the bonus levels for ones with a Super Mario Odyssey theme, but it's not a major addition.

As with Donkey Kong Country: Tropical Freeze, however, the failure of the Wii U means that most people won't have played Captain Toad: Treasure Tracker before. That alone would be justification for a Switch re-release.

That this in-betweener game sits so comfortably on Nintendo's in-betweener device - albeit not quite perfectly - is a bonus Captain Toad himself would be proud to discover.

Captain Toad: Treasure Tracker is a beautifully charming perspective puzzler that deserved a second chance at success. It's also a decent - though not quite perfect - fit on Switch
By Jon Mundy
| Jul 11, 2018 |
Switch
Find out more about Captain Toad

Captain Toad: Treasure Tracker is getting true co-op in a free update