How does King top its biggest hit, Candy Crush Saga? That's a question that the publisher has evidently been asking for some time.

Diamond Diaries Saga is the latest attempt at an answer. This time that answer seems to be: ditch the Bejeweled act and try and learn some of Disney Tsum Tsum's moves.

Or, to put it another way, it's still a casual match three puzzler, but with a more physics-driven edge.

You're still dragging to match coloured baubles here, but rather than sitting in neat lines they all stack and tumble off one another like marbles in a jar.

After you've drawn a zig-zagging line to link three, six, or even a dozen or more touching charms, they disappear. Any charms stacked on top then move into the vacated space.

Your ultimate goal is to dislodge the shiny gems that are caught up in the scrum, sending them beyond a preset line in order to add them to your tally.

With some levels that means a race to the bottom, while others flip that on its head. Indeed, it's the sheer variety of puzzle types that defines Diamond Diaries Saga - for better and for worse. 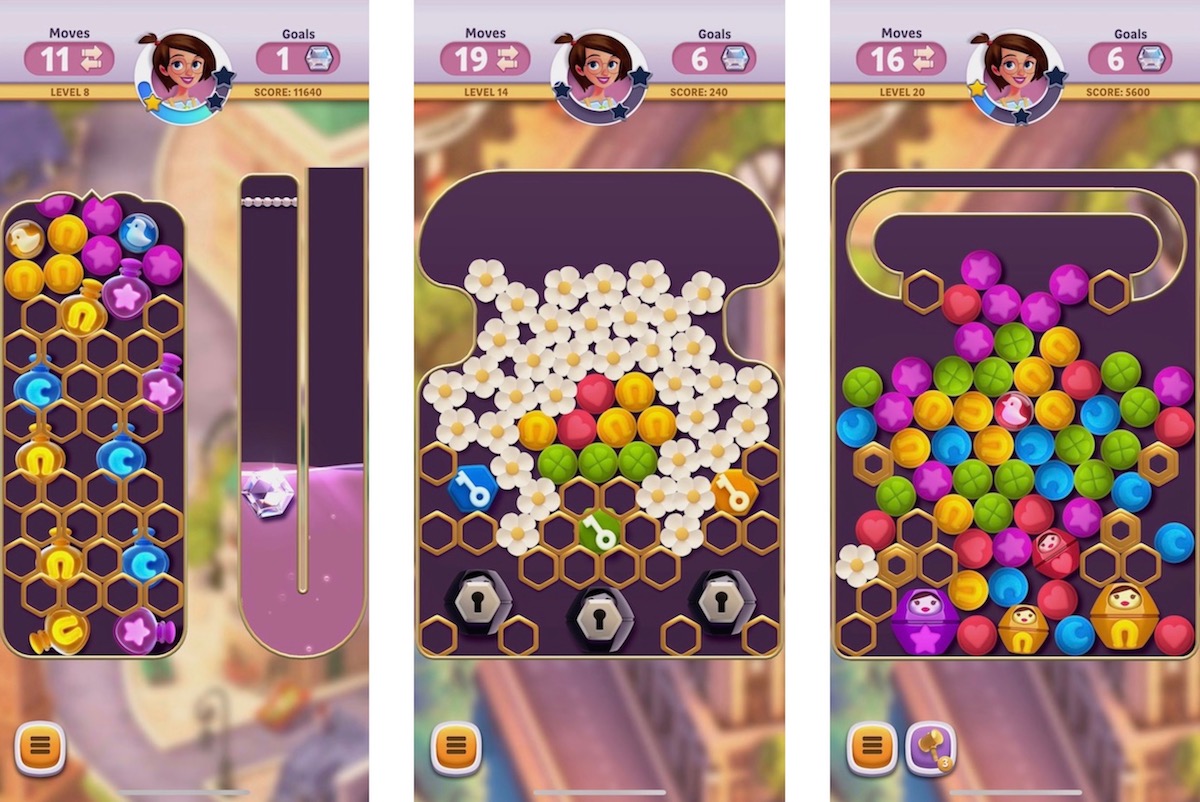 Diamond Diaries Saga is kind of all over the place. Some levels are straight up single-screen affairs. Others are elaborate multi-sectioned efforts that see you pushing gems through pipes and cisterns.

Raising and lowering fluid levels also plays a part, as do removable platforms. There are flowers that serve as a 'fog of war' mechanic, locks that need unlocking, Russian dolls that require unpacking...

Now, don't get us wrong, we appreciate a bit of variety in our games. But Diamond Diaries Saga feels weirdly haphazard with its approach.

The core mechanics are fun and zingy and tactile in isolation. But the nature, length and quality of the levels that frame them fluctuates rather alarmingly. It just never quite seems to settle convincingly.

It's also often hard to detect where the difference lies in a barnstorming three star sweep of a level and a failure, which is when you run out of moves before you meet your gem requirement. It can feel a little arbitrary, like some kind of freemium algorithm is driving the result as much as your skill.

We'd need to play an awful lot more to confirm that feeling, of course. And that's clearly what Diamond Diaries Saga has been geared up for: lots and lots of play sessions over weeks and months, rather than hours.

It might well prove to be able to stand up to that, but right now we're just not feeling the consistent pull that the best time-sapping freemium puzzlers tend to have.

Diamond Diaries Saga brings a dose of Disney Tsum Tsum's physics-based unpredictability to the match-three puzzler, but it seems to lack a vital sense of focus and direction
By Jon Mundy
| Jul 9, 2018 |
iOS + Android
Find out more about Diamond Diaries Saga

Diamond Diaries Saga is the newest game by Candy Crush developer, King, and it's out right now