The old Spell Hunter archetype has fallen out of favour. But its package of Secrets and Spellstone was so powerful, it's turned up again in a whole new archetype, Recruit Hunter.

This combines the best bits of Spell Hunter and the classes' affinity for Deathrattle effects with a powerful new tool. Class legendary Kathrena Winterwisp has been out a while, but it's taken this long for someone to leverage her awesome power.


At first glance, this looks like a very expensive deck. But you can replace almost all the pricey cards, Kathrena excepted, with cheaper alternatives.

It's great to see a deck that uses the awesome but too-expensive King Krush. Charged Devilsaur is a "budget" alternative, because if it's summoned via a Deathrattle, it loses its Battlecry and can Charge. However, given all the Deathrattle combos in this deck, the much cheaper Savannah Highmane is only slightly inferior to any of these three. It's an easy and powerful replacement. 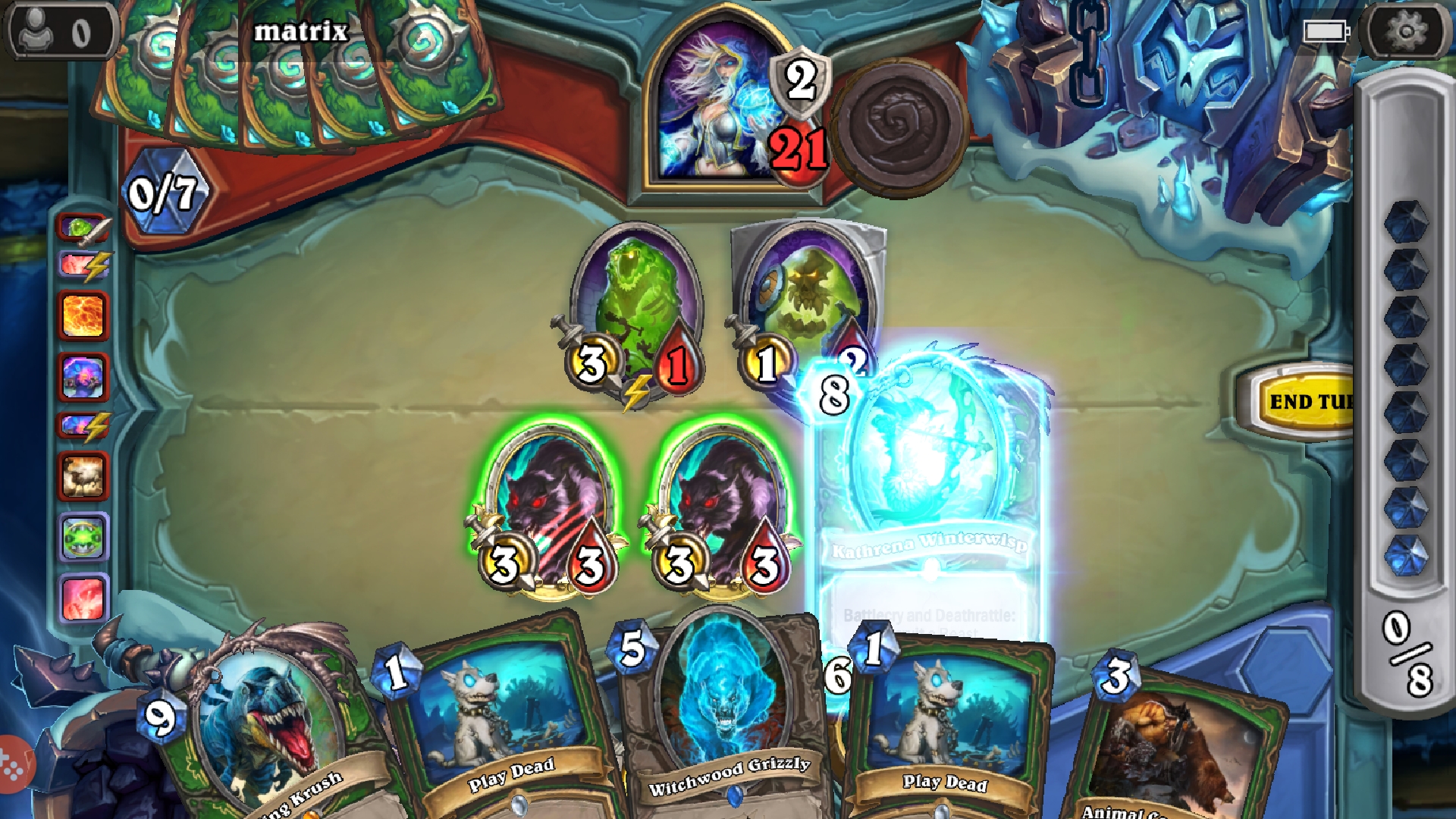 Carniverous Cube works with those Deathrattles, too, but unlike other classes, Hunter has a viable alternative - Seeping Oozeling, which gives you similar access to extra Deathrattles. You can also use it to replace other more expensive cards if you want.

The final legendary in the lineup is Deathstalker Rexxar, and it's optional at best. It'll only win you a handful of games where card draw becomes an issue. Swap in one of the replacements suggested already, or perhaps a Violet Wurm or Terrorscale Stalker.

If you're short of secrets, you can also add in any that you like from the Hunter line up. The ones in the list are optimal because they let you deal with a lot of different situations. But replacements can help keep an opponent guessing as to what's hiding above your face.

Click below to find out more about the deck...

The deck is light on early game minions. Animal Companion and Wandering Monster are your substitutes and should always stay in your hand. Tracking is also a keeper, as it provides colossal flexibiltiy in gaining access to your tool set.

Recruit Hunter has an unusual number of situation-dependent mulligan options. If your draw includes a secret and one of the supporting cards like Eaglehorn Bow and the Spellstone, it's often worth hanging on to both. The secret you want against aggro decks is Explosive Trap. Against slower opponents, it's Freezing Trap.

If you feel you're facing midrange or control then you can also keep a Stitched Tracker. It's a poor value early-game minion but over the long term it's very strong in your game plan.

Recruit Hunter has a poor opening game, and it's all about survival. All those secrets, however, give you a huge edge in doing just that. Explosive Trap will clear the board and Frozen Trap can remove a single big threat. Wandering Monster saves your face as well as giving the possibility of a body on the board. 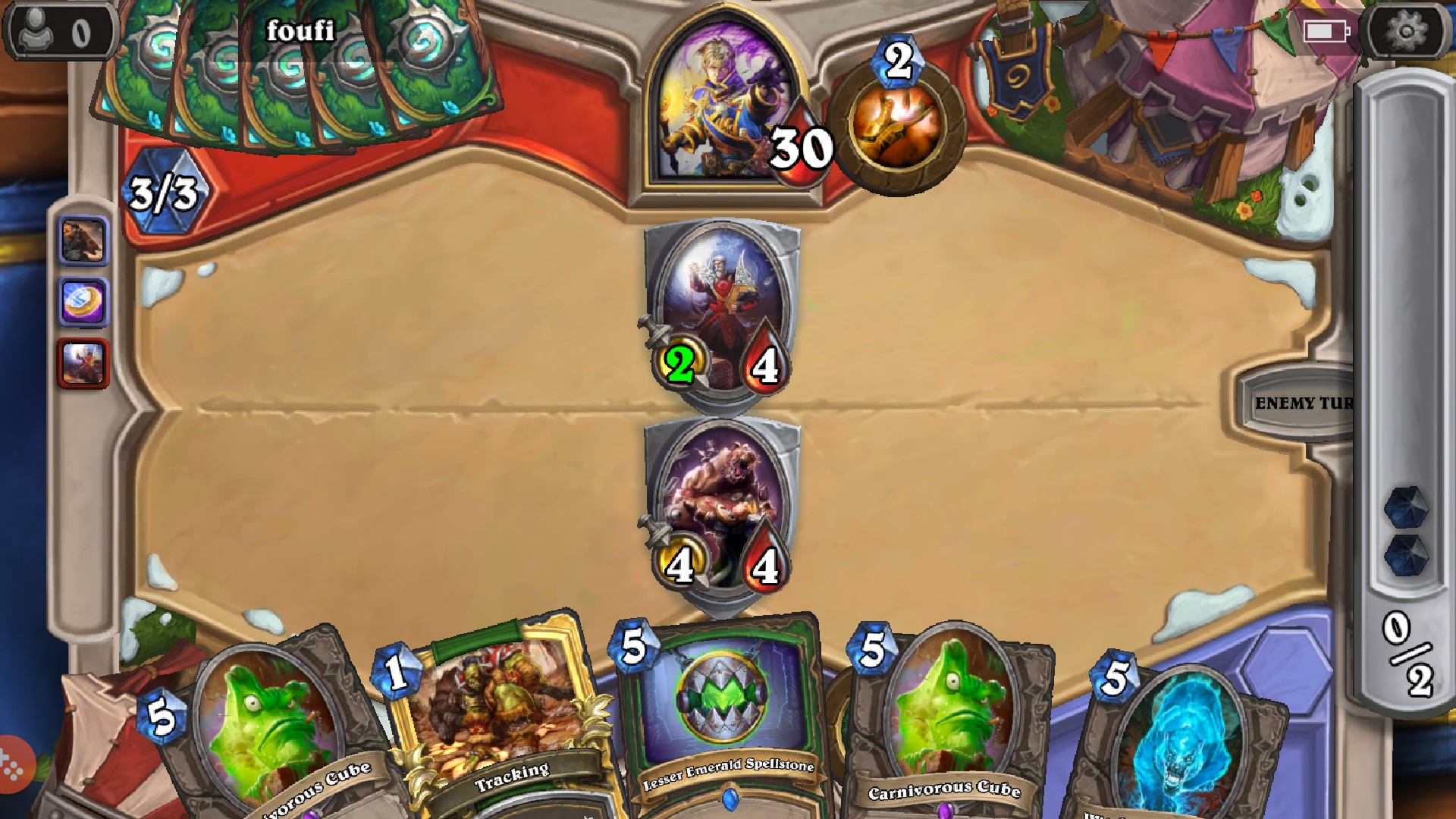 All the secrets will buff your Spellstone for deployment if you can survive. They also add to the Durability of Eaglehorn Bow, which is a great tool for removing threatening minions. Animal Compansion is also a boon two times out of three. Misha is a solid Taunt and Huffer can trade with dangerous minions.

If you run out of useful early cards, use your hero power to pressure their health total.

Between them, they should give you time to deploy Witchwood Grizzly. This is a superb defence against aggressive decks because its health won't suffer. If you can survive to Cube it and then either kill the Cube or trigger it with Play Dead, you've got a 24 point Taunt wall to hide behind.

If you can reach mid-game with a decent health total, you're in a very strong position to close out the game. The big engine you're after is Kathrena: if you don't draw her, go fishing with Stitched Tracker. 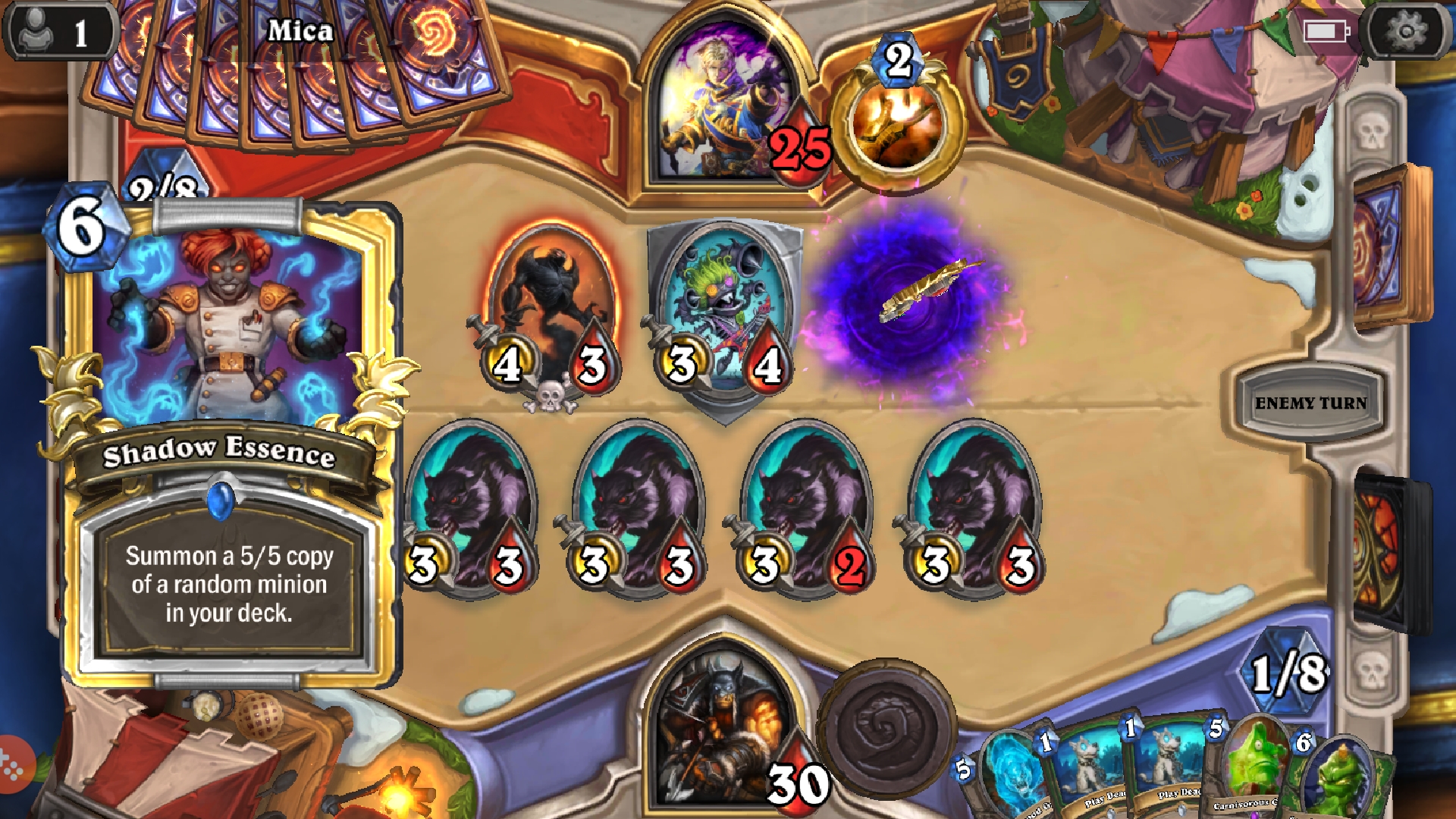 She costs 8 but will recruit one of your massive minions with her. If you've got the Charge package, they can smash out an opposing minion or the face right away. And she'll do you the same favour when she dies.

So, why not kill her yourself? Slurping her up with a Carnivorous Cube - after she's attacked, of course - offers a ridiculous amount of value. Which is then multiplied if you can use Play Dead on the Cube or, indeed on Kathrena herself. A single turn of this dinosaur abuse can end the game.

If you're not lucky enough to draw Kathrena, don't despair. You can go a long way with this deck simply by using the same approach with your big minions. Attack, Cube and Deathrattle your way to victory. Or you can fall back on the wolf pack and use the huge value generated by the charged Spellstone, Flanking Strike and Rexxar to eke out a win.