Straight from the 'art

Artful Balancer is a game of careful nuance. Your job is to balance stacks of colorful bubbles to collect gold and complete challenges. You’ll have to be careful to avoid precarious hazards that can tilt your carefully laid stacks and send them toppling. Thanks to the game’s latest update, which hits the App Store this week, Artful Balancer has become a good deal more challenging, meaning you’ll need to use every ounce of strategy you can summon forth to beat each level.

The game puts a unique spin on arcade and puzzle games, combining the two genres to create something rather unheard of. We sat down to talk to the creators of Artful Balancer, up and coming game studio MM347. In this behind-the-scenes exploration of the creation of the game, explore what inspired the design team to build Artful Balancer in the first place, and just how they went about doing it. Are you ready? Let’s hop on it.

Who or what is the Artful Balancer?

What do you think Artful Balancer offers that you can’t get from any other title on the App Store?

Artful Balancer is a curious mixture of various game types or aspects, it can feel quite arcade-like on normal mode but puzzle-like on strategy. It’s pretty and colourful like many other games; it has different themes and many patterns. Underneath all of those aspects it has an educational element, it wants to teach you about balance and symmetry, it’s not overtly mathematical but it’s there, the math is intuitive. Lastly, whilst it looks and feels familiar, it’s totally original – there isn’t another app in the store like it (or at least none we’re aware of).

To some AB will look and feel like a fun, full-on arcade game, to others it will bring about a conscious thought about the nature of balance and symmetry, maybe even curiosity and that’s great. This duality is entirely intended, we were looking for a game that fulfils both roles. We like duality; it’s interesting, albeit we don’t want it to be obvious and shouting from the roof-tops.

The App Store has many similar games (probably too many), it’s part of the model and some of those games are very good. We think Artful balancer is unique in that it isn’t based on an existing idea or game type – it strikes out on its own and is defined by itself. 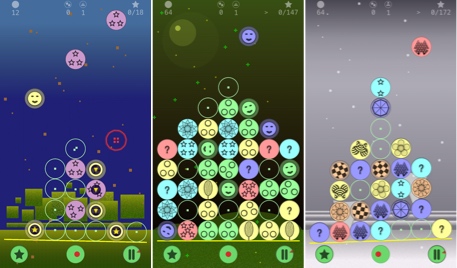 What is this update bringing new to the game and what were the biggest challenges faced during development?

The challenge has been significantly enhanced in this version bringing us closer to what we feel is a definitive version, we felt the game was a little too casual in places before and wanted to really challenge the player (the balancer). The challenge is now also dynamic to an extent and will push the balancer to the limit but can also be forgiving; we’ll let the balancers ponder that one for themselves. This challenge question split the team during testing but sometimes good ideas do that. It’s all about breaking the paradigm sometimes.

There’s a new hazard in town too, a ball that blocks columns so they can’t be used, the balancer is forced to move it around to suit, it’s a simple idea but the game play can be quite complex.

This version also brings new themes and optimisation for the iPhone X. In short, this update is prettier, faster and harder to beat!

Originally we spent a lot of time during development ensuring the game would run smoothly and continuously at the highest frame rate, we didn’t have that challenge for the update. The biggest challenge for this update was how much to enhance the challenge, the dynamic aspects and how that translated to the levels. There were lots of other changes we would have liked to include in this update so invariably the challenge also included – where do we draw the line?

How has fan reception been so far towards Artful Balancer, and have any suggestions from the players made it into the game?

It’s very early days, we wanted to get closer to what we felt was a definitive version before really pushing the game. Those that have played have really enjoyed it and yes we always listen to suggestions and some of those have made it in.

This is a very difficult question, because I’m obviously proud of many aspects. Given we are relatively new in the app/game publishing space I think I’m probably most proud of the fact we delivered a completely original, quality game. The game also has a coherence I’m very happy with.

In the beginning, there was an idea for a game about balance and symmetry. We did some research in the App Store and elsewhere and found there was very little with these ideas or extended these ideas. From that point we knew we could do something. The idea evolved but the result is spiritually bang-on.

Are you planning to release an Android version of the game as well in the future?

Nothing definite yet, if there is demand we will.

Why did you develop Artful Balancer?

We are passionate about games and apps that feature some kind of educational edge or idea or just some other quality. Something less random that puts control back in the hands of the player. Something with multiple routes/choices/strategies, but at the same time is fun to play, something with depth.

Our mission statement is Games With Ideas, I guess that sums it up.

There are free and premium versions of the game. Simply download from iOS App Store onto your iPhone or iPad. Fire it up and away you go. There is something for everybody, suitable for little people too.