Sticking it into the mixer

First New Star Soccer Manager, then Rumble Stars Soccer. Anyone would think that there's a massive international football tournament right around the corner, or something.

Recently soft-launched in a bunch of territories, Rumble Stars Soccer isn't quite what you might be expecting.

This is the latest effort from Frogmind, the studio behind the wonderful adventure-flier Badland and it's even wonderfuller sequel.

Not that you'd have any clue as to this fact simply by playing Rumble Stars Soccer. It's operating in a completely different part of the market.

What does Clash Royale have to do with footy? Nothing at all. But Frogmind has mashed the two things together nonetheless, and the initial results are pretty promising.

You start each round of Rumble Stars Soccer on a compact walled football pitch, your lion goalie facing off up the screen against an identically shaped rival.

Along the bottom of the screen, just off the pitch, are four more mascot-like players, who can be summoned onto the pitch with an Angry Birds-like ping - provided your action-point bar has filled up enough.

Each automated player costs a different amount to summon, which reflects their capabilities. The panda has a mean direct strike on goal, but won't chase after the ball at all. 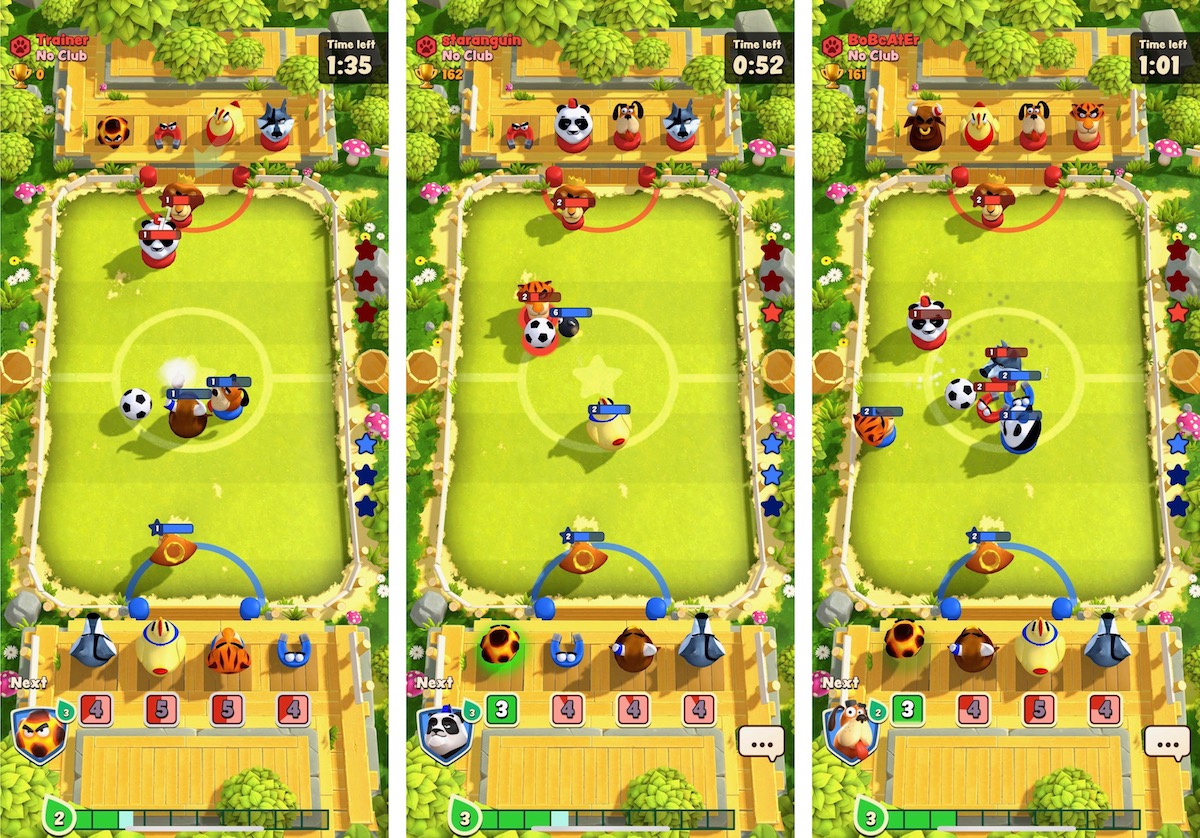 The bull meanwhile, doesn't care a jot about the ball, and instantly off to cause damage to the most threatening opponent. Anyone who saw Martin Keown play football will know what this looks like.

Then there are the more outlandish units, like a magnet that pins opposing players in place, a fiery boulder that damages all players within a blast radius, and a chicken that launches homing bombs at the other team.

At first, I found that the lack of direct control over the football action grated a little. Having recently played a lot of New Star Soccer Manager and Soccer Stars, I'd grown accustomed to a more direct approach to casual footy.

But after a few rounds of Rumble Stars Soccer I'm starting to warm to Frogmind's concept. As with Clash Royale, it's all about the combination of units, and when you choose to employ them.

Playing against a series of human opponents at more or less my level, I found great success in the dog and wolf combo. The dog retrieves the ball and gives it to an offensive player, while the wolf has a shot like Harry Kane.

One lion on our shirt

There's also a pleasing immediacy to the action here that something like Clash Royale lacks. You can ping your units to anywhere on the pitch, and their landing will have an immediate physical effect, knocking other players around.

At the time of writing I was just getting to the point where you need to grind to earn new player cards - or to level up your existing ones. It's another Supercell-like system, and we'd expect it to be handled with a fair amount of delicacy.

Our final judgement on that, as well as of the game's unusual approach to the beautiful game, will have to wait until the final release. Until then, I can see myself happily turning to my team of animals while the three lions of England underwhelm in Russia.

Want more? Check out our 28 other Rumble Stars articles!