...and there are plenty of rewards to beam up

Subscribe to Pocket Gamer on
In Cosmic Eggs, you’re up against extraterrestrial invaders, and the only way to save Earth is by fighting fire with fire – or rather aliens with aliens. You collect, breed and level-up your own squad of critters to defend the world one battle at a time. This latest update to the JRPG isn’t a drastic game-changer, but does introduce some handy tweaks to gameplay. It also comes with some welcome rewards, but first thing’s first...

While the main mode of play has you fending off wave after wave of diverse and deadly creatures, Colosseum lends a PVP element to Cosmic Eggs; you test the mettle of your best aliens against those of other players online. This update allows you to see the enemy party before you meet them in the arena. That means you can decide whether your opponent is worth a punt, or too tough to risk it.

Another change of note is that you’ll now receive rewards based on the number of aliens you’ve unlocked, meaning the more you play, the more you earn. You can also sneak a look at how your stats compare with your mates’ using the Friend Rankings. 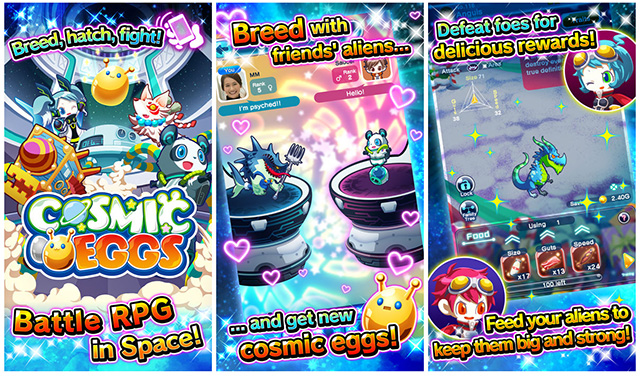 Thrifty players will be pleased to hear you can now perform item exchanges without having to make purchases. Collect the necessary items by battling in the Colosseum and completing Events – then make the swap in the new Exchange Shop. You can also save thanks to the sale on 50k hauls of Gold, running until 3 May; that’s more coinage to spend on breeding and levelling up.

Now, let’s get on to the rewards. First, there’s the good old-fashioned log-in bonus. Log in to Cosmic Eggs daily between 5 May and 8 June to receive all sorts of useful items, including over 500 meteors – enough to play the Gacha 10 times. There’s also a nice little incentive to be social; follow an in-game friend on Twitter and you’ll win a reward.

Next are the quests. Between 25 May and 3 June, level-up in lightning-quick time thanks to the EXP Quest and additional daily quests. Plus, you’ll only have to part with half of the usual Stamina required to take part.

Finally, the 30% reduction in hatch time means you won’t spend so long twiddling your thumbs waiting for your new alien to break out of its egg. This time saver lasts between 25 May and 3 June.

That’s a cracking lot of reasons to join the intergalactic heroes of Cosmic Eggs pronto – you can download the game for free from Google Play and the App Store.

Candian iOS-users can now play ARK: Survival Evolved... so long as you've got a decent device

Hatch heroes and battle aliens in Cosmic Eggs, a JRPG by Ambition