An android walks into a bar...

Time to practice your cocktail making skills, because bartender simulator VA-11 HALL-A: Cyberpunk Bartender Action is coming to Switch in the first quarter of 2019.

Well, it's a bit more than just dealing out drinks. VA-11 HALL-A, other than being a nightmare to type, is a visual novel where you converse with patrons, discuss the finer points of android morality, and mix different drinks to get different conversations going.

If the Switch can get PS Vita ports, surely it can get Wii ports too? Here's some classic games we want to see on the console. 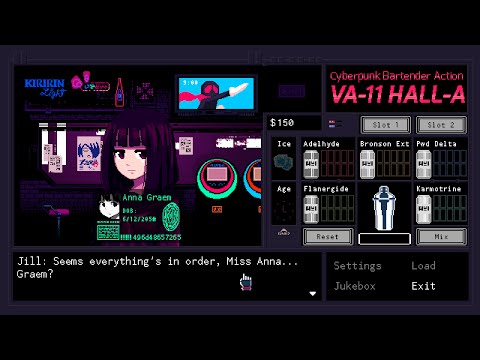 It came out on the good ol' PS Vita in the US back in 2017, and it was even supposed to launch on mobile at some point, but that doesn't appear to have happened. A shame, really.

Still, a Switch release is almost as good as mobile, right? And, personally, I've wanted to play this for a very long time, so having it on Nintendo's console might finally persuade me to pick up a copy when it launches.

There's nothing else to say about the game really – it'll likely be the same as it always was, but on a new console. Keep an eye out for it when it launches some time in Q1 2019.