I love throwing axes at people. Sadly I'm not allowed to do it anymore, but for a brief period in my youth, I was the man. The axe throwing man. Feared and respect.

These days the axe antics have to be constrained to video games, and while God of War is all well and good, I like my axes thrown fast as hell and on the go. As such, we have Axe.io.

If you're looking to get some axe action in of your own then give Axe.io a go, and go in prepared with the following knowledge… 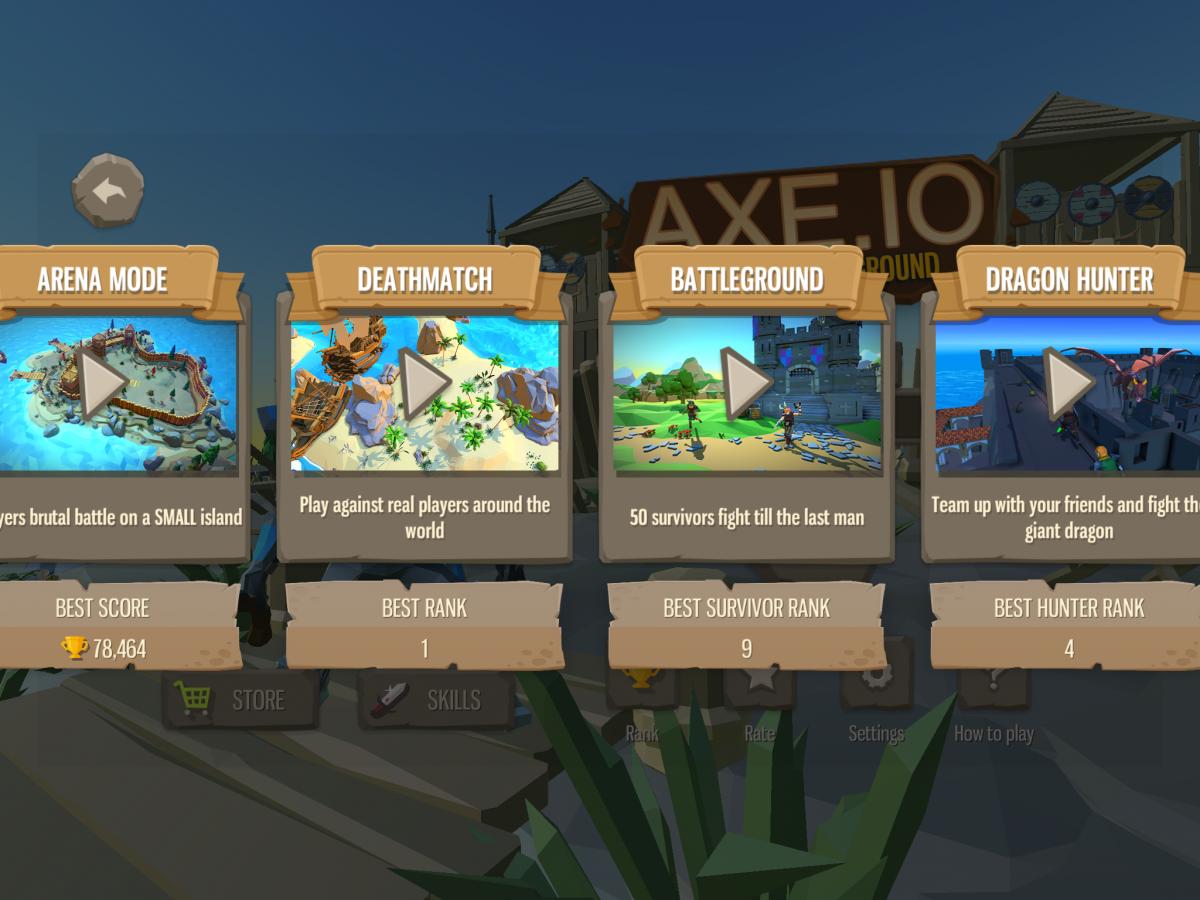 The main aim of Axe.io is to throw axes at enemies. Nice and simple, then. To that end you've got an axe throw button and a dodge roll which recharges. You can level up by collecting money, which will give you a close range sword and the ability to pick up shields.

You also gain access to fire pits, which give you explosive axes. Very nice.

You'll quickly learn to spin on a dim e and flick out axes to kill enemies, as well as instinctively dodge when you see enemies aiming in your direction. Before long you'll get the hang of aiming axes just ahead of distant enemies to nail them, and that's very satisfying. 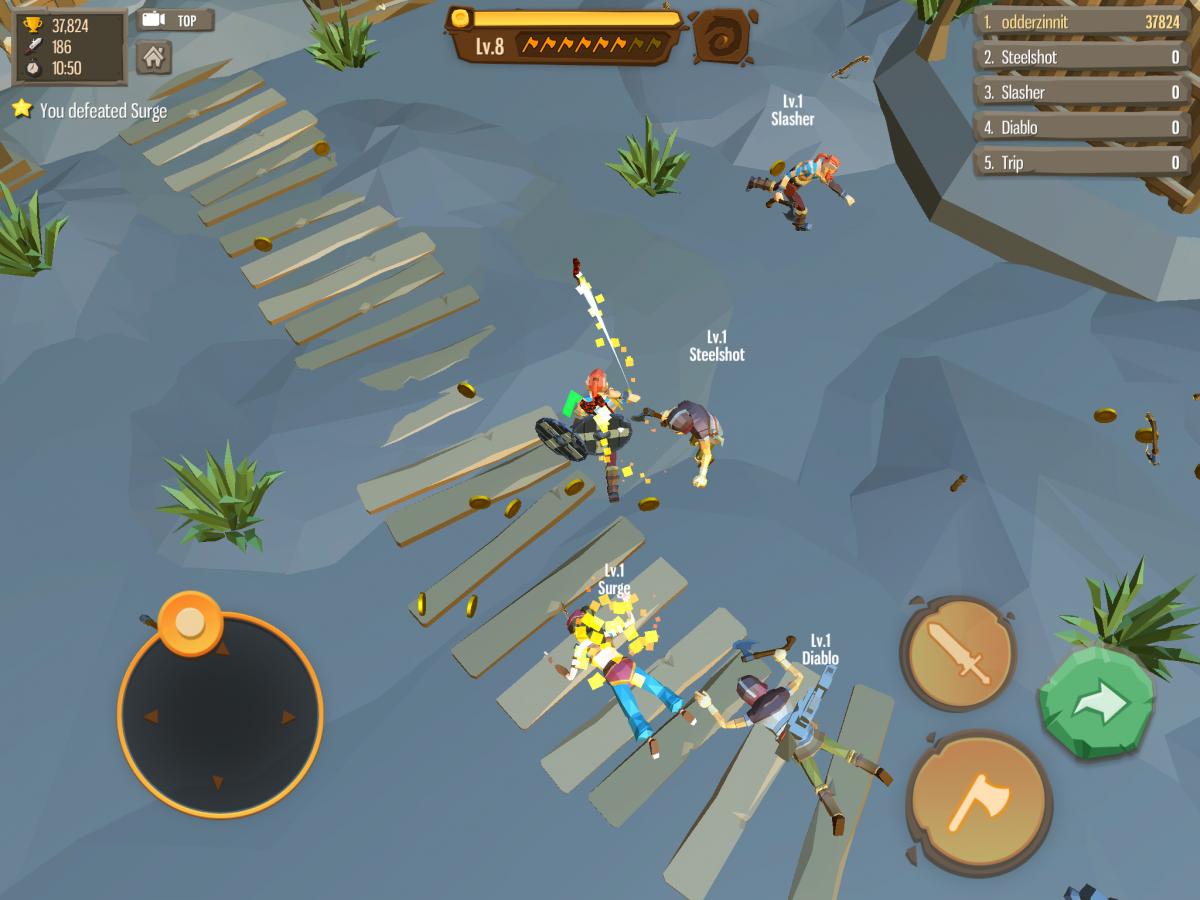 The Arena is where you'll hone your battle skills. Against six CPUs, you'll basically sweep the floor with them, and get the hang of how to play the game.

It's a small arena with all of the items and obstacles you can expect in larger stages, so play this for as long as you need to feel comfortable and earn gems. 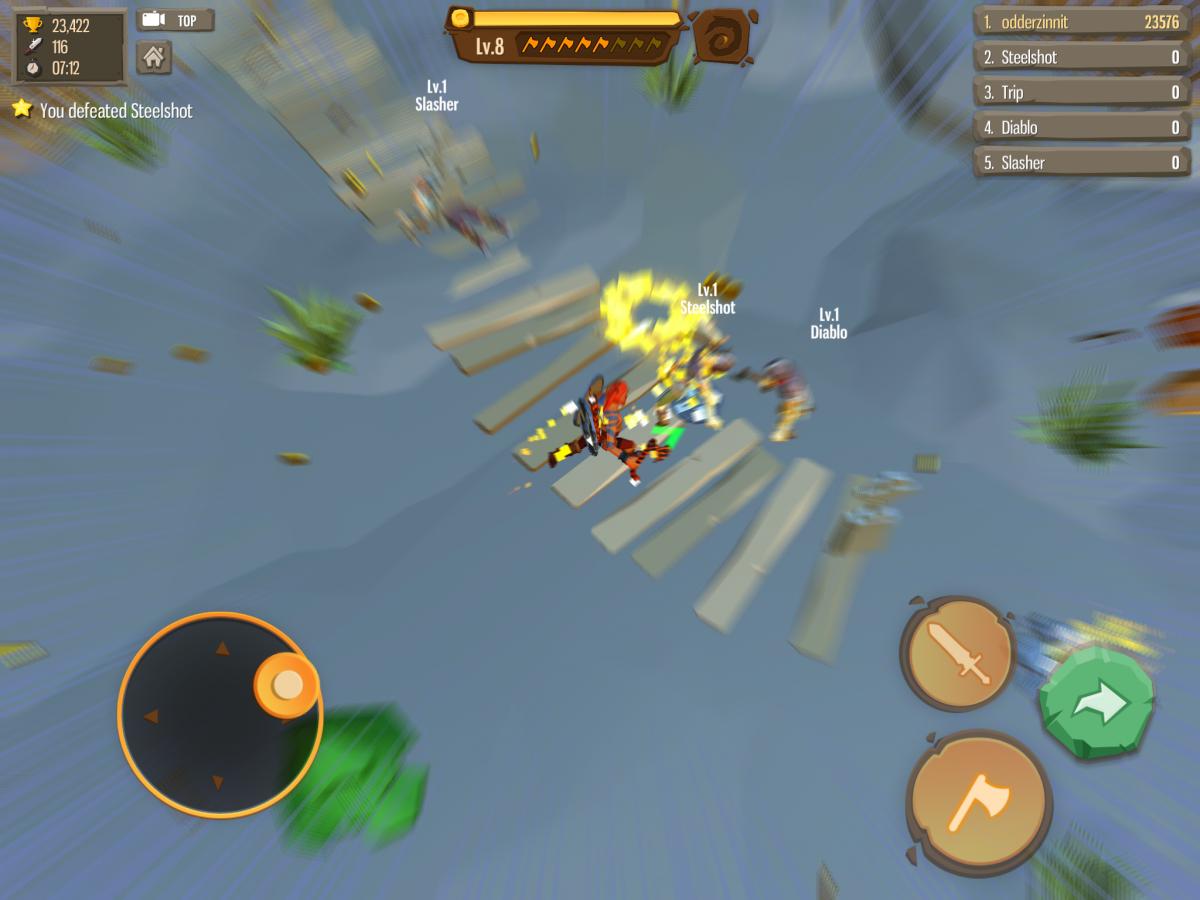 The Deathmatch mode is the real meat of the game, where you'll against real players and hone your skills. Unlike fighting against CPUs though, these enemies will be tougher and, well, a bit laggier. But you'll adjust.

Fighting over a slightly larger island you just have to get as many points as you can by dealing with enemies as fast as you can using the skills you've been given.

Of course since these are real players you'll want to be that much more careful when running around the map, since real players will snipe you before they're even on screen. 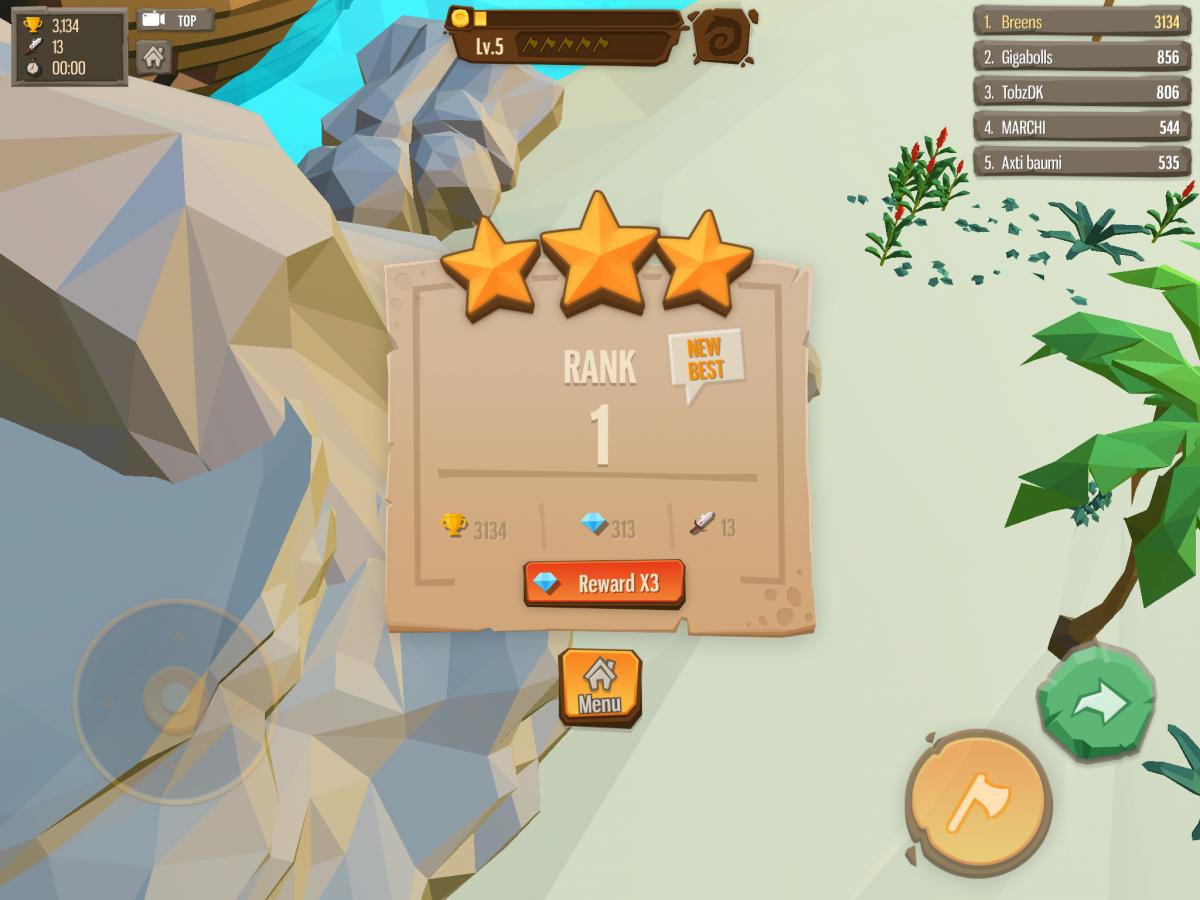 It's not actually quite like a real battle royale game, instead you simply must survive before 50 other players die. It takes place in a continuous game and, unless I'm mistaken, features a mix of real and CPU players.

It's a big level, with a small town area and a large grassy island. When you spawn you're likely to spawn right next to an enemy, so get ready to dodge out of the way immediately.

Gather coins as fast as possible so you can prepare for the battle ahead, and be wary of running in when multiple enemies are fighting. 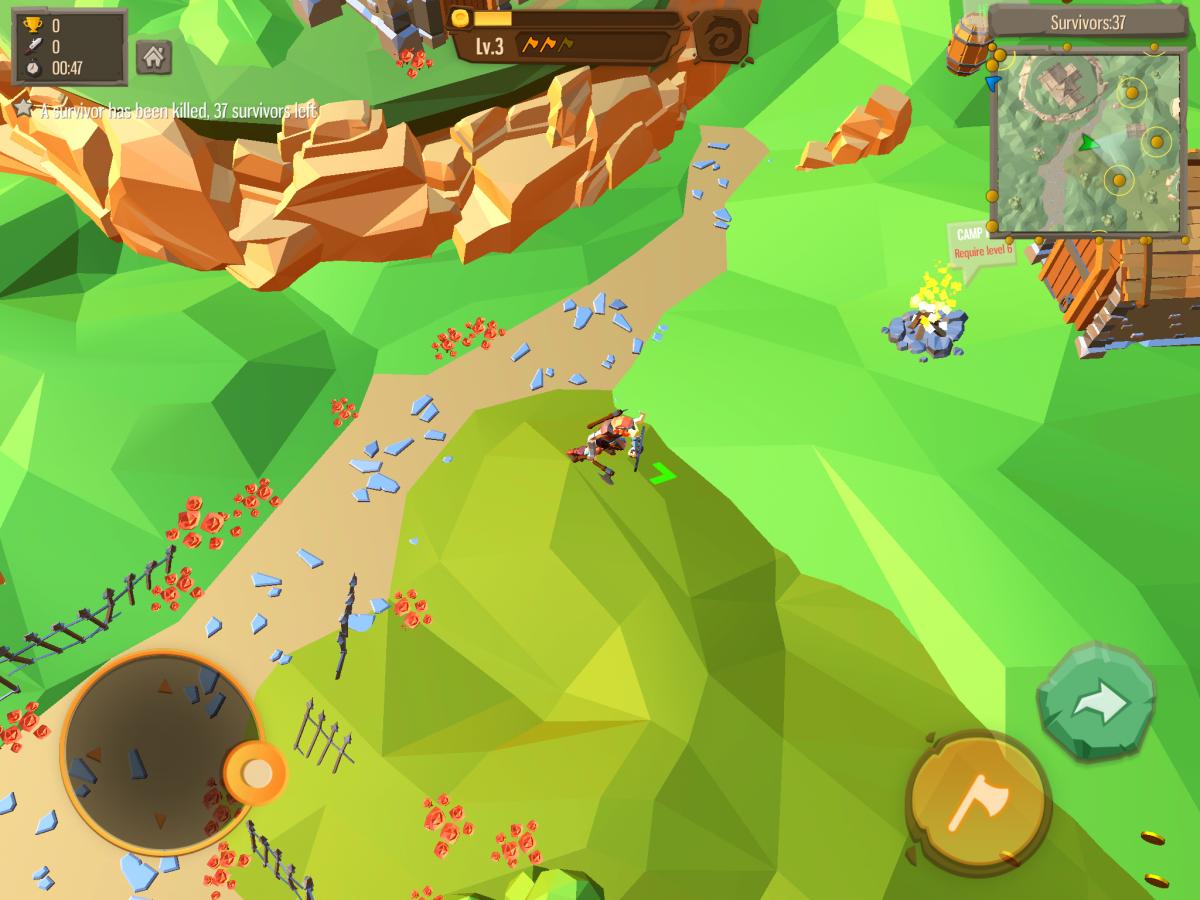 Here you can team up with other players to take down a dragon boss. This might be one of the coolest modes, and also the only mode which you can really use the alternate camera mode, which will follow the dragon. Activate it in the top left of the screen. It's not so useful in other modes, sadly.

Dodge roll out of the way of fireballs and watch for the dragon's patterns and which of your team it is targeting.

You can't throw axes too close to the wall, so step back a bit. This can make it awkward to get a shot, but you'll get the hang of it in time. 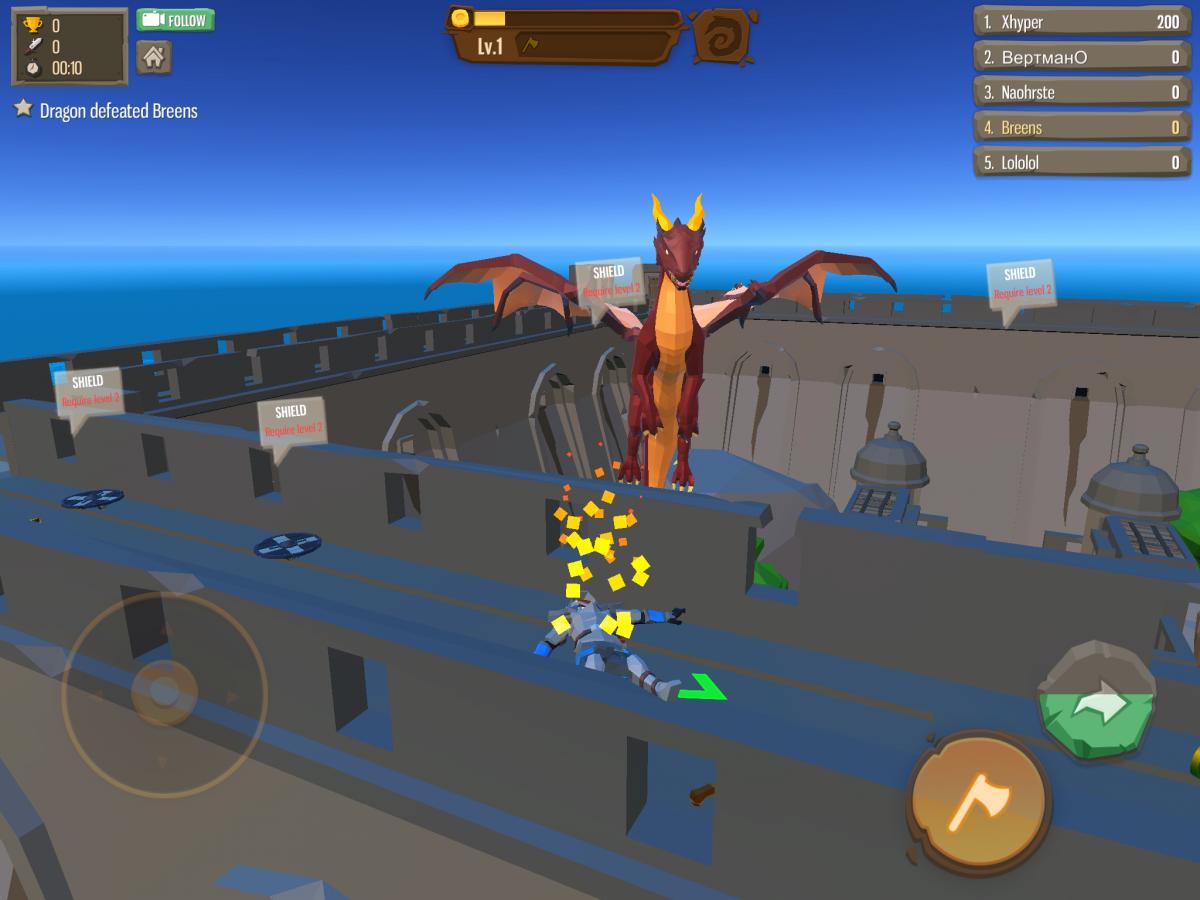 New iOS and Android games out this week: Tiny Bubbles, Among the Stars, Bombarika, and more