This list will tell you which of the multitudinous .io games are actually any good. It's not a huge list, but if you've got the .io itch, these are definitely the games you should use to scratch it.

The newest, and by far the deepest, game on this list. It's a 3D arena battler that sees you hurling axes at the heads of your foes. There are multiple modes to sink your teeth into, and a decent progression system that actually changes the way the game plays.

Axe.io is the genre all growed up. It's fun, it's fast, and while it's still essentially a distraction, it's exactly the sort of distraction loads of people are craving right now.

To all intents and purposes, this one is multiplayer snake. It's a bit clumsy, a bit clunky, and pretty ugly, but it still manages to be an incredibly compulsive experience. Seriously, try just having one go, it's almost impossible.

No, it's not going to win awards for, well, anything. But as silly little flashing things go, it's definitely amongst the best of them.

The game that started it all. It's all about making circles really big. There are hundreds of games out there that copy its look, style, and feel, but none of them manage to get the balance of fun and frivolity just right.

If you're a traditionalist, or you just want to try to get to grips with how .io games became such a phenomenon, then this is the place to start. 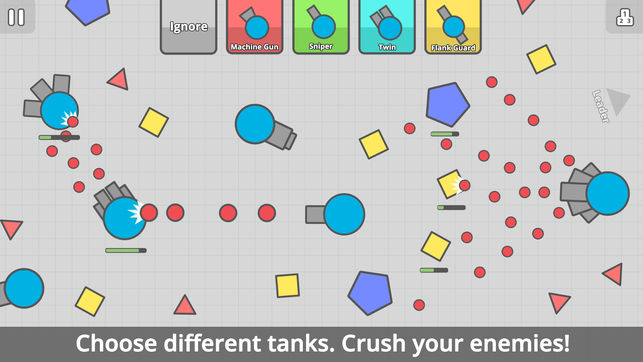 Another game from the creator of Agar.io. This one adds a combat flavour into the mix. It's a deeper experience than Agar.io, but it's still light enough that you can dip in and out of it as you please.

Sure it's a couple of years old, but there's still a big ol' chunk of game to smoosh your face into here. And did I mention it had tanks? Tanks make everything better.