Find out what’s new with your favourite MMORPG, Lineage 2: Revolution

Lineage 2 was one of the first big online PC games to make its way to mobile, with titles like Black Desert Online and even PUBG and Fortnite following in its wake. Lineage 2: Revolution is still going strong, celebrating 5 million players this past January.

The game’s been a huge success thanks to developer Netmarble’s ability to translate a rich MMORPG into a streamlined mobile experience. Players can have as much control as they want over battles and quests, which is a feature we quite appreciated in our review of the game. Lineage 2 Revolution looks great and plays great, making it a mainstay in the world of mobile MMOs.

Lineage 2 Revolution shows no signs of slowing down as new content continues to roll out. In fact, you can expect a big update coming to the game later this spring. We got the chance to talk to Lineage 2 Revolution developers, so read on to hear more about the design process behind the game, as well as what fans can expect from the future.

What have been the most unexpected trends in the way that gamers have played so far?

We were surprised to find out that Open Siege and Clan Hall content is more popular than other areas of the game. We didn’t expect such a high number of players to enjoy real-time battles and co-op content since asynchronized mobile games and console games tend to be more popular among players. Not only that, we expected negative responses to Auto-Play and Auto-Clear features in the game, but many preferred such systems and even got comfortable using them. Of course, we can’t deny that there were some who were opposed to such styles of gameplay. However, they can be assured that we are planning to add more content that will require manual and active gameplay. We also learned other preferences of our players when we saw how many of them enjoy the PK and PVP content.

Far and away, the Dark Elf classes have proven to be the most popular. Why do you feel that's been the case?

Dark Elf classes are designed to be more offensive than defensive.

It seems there are more players in the western region, compared to other regions, that prefer more exciting combat, or characters with powerful attacks, or perhaps it’s because Dark Elves are more unique looking… and imposing than other classes?

The Fortress Siege mode have been a welcome addition to the game, but can we expect to see even more variety added to PVP and PVE modes in the year ahead?

We are preparing Castle Siege, and a lot of other PVP content that will allow players to create their own team to conquer the battlefield, or even fight to be the last remaining survivor of a bloody battle.

Of course, we are also developing additional PVE content such as the World Bosses, which involves the maximum number of players, and quest-oriented dungeons where the players will have to play actively in order to win.

Our focus is to create more content where many players can have fun together at the same time.

Other various features are on their way as well, such as a Community Hub where players can get together, and costumes to express each player’s style. 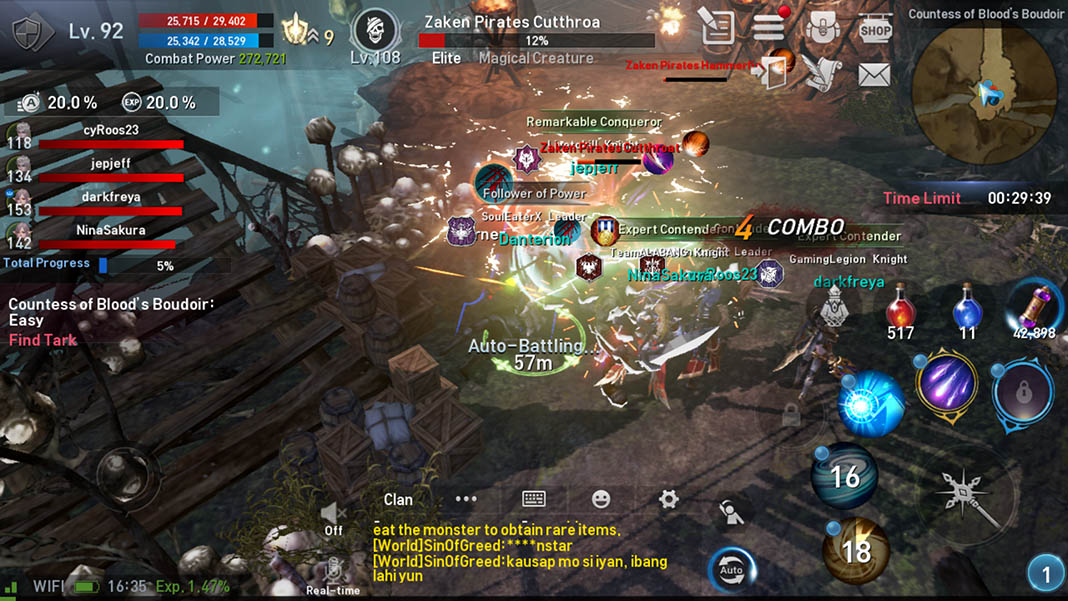 What would be your advice for new players just starting the game?

With most games, it’s not easy getting used to a game you’re playing for the first time. However, our game is easy to get hooked on with just a little bit of practice. You can enjoy it without any fear or worry.

The most important thing to remember is that MMORPGs aren’t single-player games. We highly recommend that you join a clan from the very beginning to meet other people and maximize the fun.

Joining a clan gives you access to the Fireplace and Feast systems within the clan hall, which can give various buffs, including an increased Exp. Rate!

The community obviously plays a huge role in the game. Have you incorporated any fan suggestions to improve the game so far?

Applying every player’s opinion and suggestion is not always easy, and that can extend development time. Therefore, we’re currently working to come up with a way to develop and implement the player feedback we gather.

We value the promises we make to our players the most! We try hard to keep our promises and will always maintain this ethic for the future. We will do our best to make Lineage 2: Revolution more enjoyable. Thank you.

Want more? Check out our 10 other Lineage 2 Revolution features!

Gamevice strikes up another lawsuit against Nintendo Switch, this time over its Joy-Cons