It's time for our App Army to have their say

Another week, another App Army Assemble, and we're stepping into some familiar territory here. Vandals is an artistic puzzler where you need to skirt around the cops, tag walls, and head on off to the next stage without getting caught.

No, it isn't an extension of Square Enix's GO games, but it's certainly got a lot of similar actions. From turn-based mechanics to the marked-out, isometric layout of the levels, we'd be lying if we said it was totally original.

But, what does our App Army think of it? Let's find out.

If you're familiar with the GO games this will be instantly recognisable. Though it has very similar gameplay mechanics it has slightly less polish, and having played quite a bit of the Tomb Raider and Hitman variants of GO I wasn't really too enthusiastic to do more of the same here.

Drawing rude pictures livened things up briefly, but it feels like an awkward fit with the rest of the game. For me this just ends up in the overwhelming tide of mobile clones and failed genre mash ups.

GO franchise, graffiti your heart out. I've enjoyed the GO games immensely and Vandals is more of that with some tweaks on the surface. The objective in each puzzle is to tag a wall, this opens an MS paint style interface that brought me much nostalgic joy, and led to many tasteful expressions of creativity.

The thing I liked most about this game is the trivia derived from collectible posters scattered among levels. The aesthetic is pleasant, the innovation doesn't really push the envelope too far, and as for value, you get a good deal of content for the asking price. If you've finished the GO trilogy and are champing at the bit for more, or you have a passion for graffiti that you wish to express in a virtual space, this game is for you.

Picasso's famous maxim of "good artists copy, great artists steal" to some extent may be applied to the game
in the sense that the developer of Vandals can in no way be accused of mindless copying of "GO" titles. Moreover, they managed to seamlessly introduce a couple of elements that make this formula feel fresh and even encourage aspiring game developers for further experiments in this genre.

The graffiti spray-painting gimmick might appear to be a daunting and redundant task for such 'artists' like me, but in reality it enhances the overall atmosphere and makes the game more social-friendly. I also love the idea of collecting background information on the history and evolution of street art as a worldwide phenomenon, since at some point in my life I took an interest in this modern art form.

I would love to express my sincere gratitude to Square Enix, oops, meant to say ARTE, of course, for bringing one more turn-based puzzler to the App Store. This game will undoubtedly allow you to channel your inner Banksy, scribble all possible obscenities on the walls, and scream at the top of your lungs, "Go, vandals, go!", after making it to a level exit.

Vandals isn’t my kind of game, so I'll try and be as objective as possible about my feelings on it.

It's a turn-based puzzler where the aim is to graphiti a surface while distracting and avoiding guards. The drawing mechanic is neat idea that lets the player add their own personal touch to each level. I imagine the novelty will wear off quickly for most though.

Collectible postcards are scattered on the levels, each of which unlocks a small paragraph detailing some of the history of graphic design and subversive art. It's another nice little touch which adds to a game competing in an already crowded genre.

If you like puzzlers, enjoy a doodle, and have an interest in the history of art, well, you get the picture. 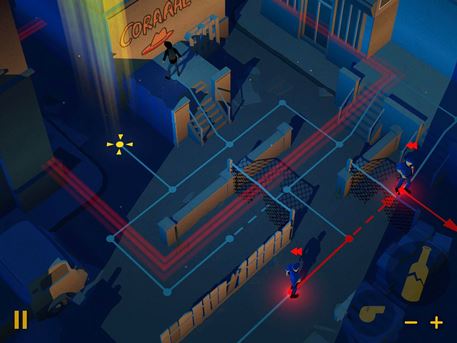 Vandals is a GO game in the same vein as Lara Croft GO, Hitman GO, and Deus Ex GO puzzlers, but without the GO suffix. The aforementioned GO games each have similar mechanics, but have a different look and feel to how they play with a mechanic of their own added for variation.

Vandals in my opinion plays more like Hitman GO and lifts some of the same mechanics. The look of it is different from the other GO type games which makes it stand out on its own. As a vandal, you sneak around the city avoiding guards and using items to distract them. Getting to the end of the level allows you to create a piece of graffiti with Microsoft Paint-like spray effects that will be displayed on the wall.

You can go through an album with all of your artistic creations if you wish. There are about 60 levels to play over five cities. The graphics, music, and audio are good, and if you like Hitman GO you will love this. It's nothing new but it's still a good game.

Having played my way through the GO titles, I found Vandals all very familiar. The gameplay is pretty much identical, but they have added the element of creating your own art when it comes to the graffiti part.

Though that is fun and slightly sets it apart from other genres, for me it's not quite enough to keep me engaged. The other GO games had well-known names backing them which made them all the more intriguing, but there is little background to this game so for me. It won't be a title that I will be playing as much as the GO collection.

This game is basically a copy of the GO series with the ability to draw graffiti thrown in for good luck. You have to keep out of the way of the security guards while heading towards a blank wall, using various tactics to distract them as you go.

I really enjoyed playing the likes of Deus Ex, Lara Croft, and Hitman GO and I thought this would be the same, but although it has the core formula it falls short because the artist is completely unknown. Perhaps a short introduction to make him a likeable rogue or a complete rebel would have given me a sense of purpose.

I can see that people with an artist flair would love this game, but unfortunately my three-year-old granddaughter can draw better than me. Give the game a good storyline and leave out the graffiti and I think I could play this game to the end.

Vandals on the Essential phone plays without any hiccups. It's very smooth and what stood out from the get go for me, outside of the graffiti artist theme, was going from portrait to landscape mode on the fly - one of my most sought-after features for mobile gaming.

Already being well acclimated to 'GO' type games, I felt right at home with the controls and the theme in Vandals is very well executed. Sneaking around creating art while avoiding being seen, using certain items for misdirection, and having certain achievements per level to give you something to really strive for is all well thought out and challenging. The graffiti you make per level can also be referenced/shared in your Black Book which felt like an ode to the graffiti artist you're made to be (a nice touch that most, if not all, graffiti artists carry and that gave myself a personal connection as an artist).

I really enjoy enjoyed mostly everything, from graphics, colours, independence in your own works of art which makes YOU the character you want to be, traveling a pretty diverse world in major cities, and some nice sound effects. What I really didn't care for was the music and, unfortunately, I had to turn it off completely. I would have loved an option to play my own, but that's not a deal breaker.

It's a good indie title to be had and it's a very refreshing take on the GO-type puzzler, but I'm not sure how it'll hold up unless more content is added over time. For the perfectionist that wants to 100% all levels, there's a solid challenge at hand. Would I recommend this? Yes! The love put in this does not go unnoticed. This is a solid little puzzler.

Vandals reminds me of Square Enix’s GO titles, but there are some cool elements which you cannot find elsewhere, i.e. when you're near to a guard you can distract him with a whistle.

The drawing mechanic is a great idea and it made me feel like I was a street artist too. The movement of the characters felt smooth, however sometimes the controls felt a little bit unresponsive for me. If you finished the GO trilogy and you want more, or you just like painting things, this game is for you. 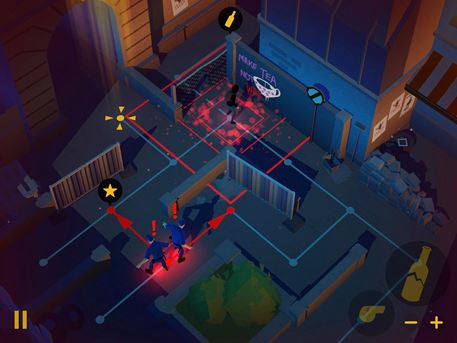 "Tag, you're it!" I actually enjoyed it a lot. While it's true that it possesses some of the mechanics of the other GO titles, the developer did more than enough to make it unique and still seem like an original game.

I've always been impressed by the awesome art displayed by some graffiti artist in NYC, and they did a great job of giving me a little history lesson on the subject.

It was fun being able to leave my own 'artwork' on the walls and the puzzles themselves are interesting and fun to figure out. I'd recommend it to fans of the GO games as well as new players.

This is an interesting game which definitely reminds me of Hitman GO. I like the art style and atmosphere, and will absolutely have to play some more.

To start with, the title itself got me interested. My first thought was that I'd be either chasing or trying to prevent vandalism, but things turned out the other way round. In Vandals you are the Perpetrator and your mission is to go around vandalising cities with your street art.

When Hitman GO released I felt that it was a huge letdown for the Hitman franchise, but this is where Vandals makes much better use of the turn-based gameplay, and adding in those simple-to-use MS Paint-style graffiti creator is fun. Players start off in Paris in the year 1968, and as you progress through each level and earn stars a new city unlocks. Each level has a simple yet challenging task that needs to be completed. The gameplay and difficulty progression is smooth and there's always a chance to improve on you tactics for each level.

The art style is again something that I really loved compared to Hitman GO, but the one thing I really felt that was lacking is the story. Why the vandalism? Why me? It would have been sweet to have a story progression through the game - a nice plot to justify my actions. Overall, Vandals is a beautifully executed game with great art and tried and tested gameplay mechanics.
What is the App Army?

The App Army is Pocket Gamer's very own community of mobile game experts. Each week, we provide them with a bunch of free codes and early access to the hottest upcoming games so they can provide their thoughts in features like this. To join, simply follow this link to the page on Facebook and request access. We'll get you in right away!

Soap Dodgem review - A puzzler that scrubs up well