Hands-on with the future of cardboard technology

It's incredibly easy to be dismissive of Nintendo's cardboard-focused Labo kits – they are, after all, the very definition of throwaway in terms of design.

But this is Nintendo we're talking about. So rarely does it have an idea that is all style and no substance - and after an afternoon tinkering with the new "hardware", we can safely say there's far more going on under the hood than first appears.

There may still be doubts about its longevity - and concerns about the initial cost - but there's no doubting that the Labo is a fascinating and very exciting new addition to the Switch.

Straight out the box

The first step with any Labo project is actually putting the damn thing together. Each Toy-Con, as they're known, comes on its own sheet of cardboard, with different parts to pop out and fold to form the final product.

In our case, we built up the RC car, a strange six-legged bug-like machine which operates entirely through the Joy-Con's vibrations in a feat of engineering genius.

Each Toy-Con comes with interactive instructions, and you can go through these at your own pace to make sure you build everything to spec.

It was surprisingly easy to put together, even for a fat-fingered person like myself, and within about twenty minutes I had a little bug skittering along a table and smacking into everything with wild abandon. 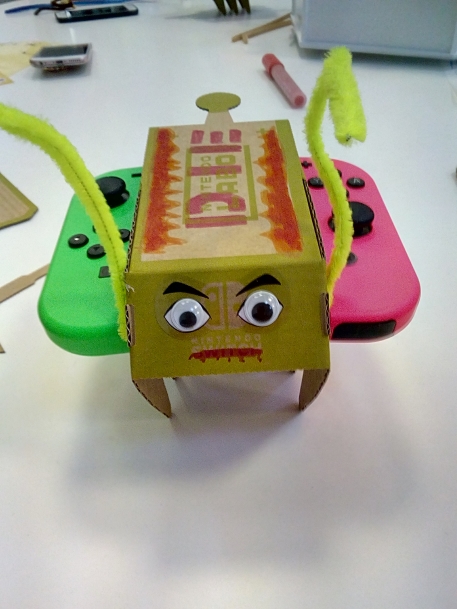 There is something quite magical about this process, it has to be said. Looking at your finished product and realising that you actually built that with your own two hands is a remarkable feeling that you'll rarely experience in gaming.

You can then customise your creations however you choose – cardboard is very receptive to stickers, glue, and coloured pens, so you can go wild and make your little project your own.

The RC car comes as part of the Variety Pack, which includes fishing, motorbike racing, a weird house game, and a tiny piano. Each varies in complexity and offers a vastly different experience.

Each Toy-Con corresponds to a different game - the motorbike handlebars let you race bikes, the fishing rod gives you a Ridiculous Fishing-style game, and the house game is so utterly weird that I can't find the words to describe it.

But the standout of the entire collection is the piano. You may have seen footage of a whack-a-mole type screen with characters popping out depending on the key you press, and that's a perfectly acceptable way to get used to mashing the keys.

If you want more control, however, there's a full studio included too, which gives you five octaves of notes to play with and the ability to record whatever you play.

Better yet, you can scan in your own waveforms to create new synth sounds to mess about with, as well as create drum beats by scanning punch cards.

Should you grow tired of the small Toy-Cons, there's also the giant robot pack, a full-body kit with a bunch of moving parts that allows you to play an entirely separate game about smashing buildings.

Using bits of string to activate pulleys and levers, you stomp around a small town, punching the crap out of buildings and UFOs and scoring points as you do.

Stretch your arms out and you'll start flying, crouch down and you transform into a nimble car. It's ridiculous fun. You'll look like a fool playing it, but that's all part of the game.

All this is fairly surface level fun, and you could happily kill a couple of hours trying it all out and building your Toy-Cons. But the real meat of the kit lies a little deeper.

Included with each version of the Labo software is a Garage mode, which gives you access to a fairly simple visual coding space to start making your own creations. 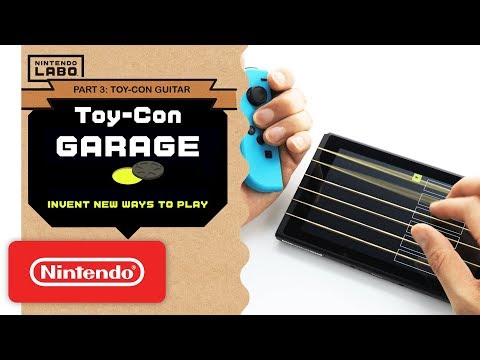 You can, for example, set up a rudimentary doorbell by sellotaping a Joy-Con to a door and having it detect an IR target in its path when the door opens.

Or you can set different buttons on the controllers to make different noises, which can then be altered by adjusting the direction the Joy-Con is facing, creating your own weird Theremin-type thing.

And if you're feeling really creative, you can use inputs from the Toy-Cons to interact with one another, like having the fishing rod make the RC car move about.

It's genuinely fascinating stuff, and there's a lot of potential here not only for adults to create whole new experiences, but also for children to start learning the basics of programming and how games are built.

Overall, Nintendo's Labo project is a very exciting prospect. Each of its three distinct parts - making, playing, and programming - offer up a lot of fresh ideas, and they're guaranteed to put a smile on your face.

The main question is one of longevity. The core games you get are largely throwaway experiences designed to show off specific Toy-Con setups, and if you're not one for tinkering with code, the Garage probably isn't going to get your creative juices flowing.

And let's not forget that you're working with cardboard. As sturdy as the Toy-Cons may be, they are still prone to getting wet or accidentally stomped on, and even a small tear or break can have an effect on your play.

But only time will tell if any of these concerns are worth noting. For now, in its early days, Labo is a fascinating, fun, and interesting project that may well inspire a new wave of creativity around Nintendo's hybrid handheld.

Both the Variety pack and the Robot pack are due to launch in the US on April 20th and in Europe on the 27th, and we're eager to get some time alone with it to see how it holds up in the long run.