OIL is an intriguing mix of battleships and a puzzle game. It's got a good chunk of ideas of its own, and as a digital board game it's definitely up there when it comes to presentation and neat ideas.

Throw in some multiplayer options and, while you might not have the deepest game in the world, you've got something that could easily slip into the rotation at your digital board game night.

The game sees you facing off against an AI or player-controlled foe. You're aiming to collect as much OIL as possible from a gridded map.

At the start of each game you and your opponent place oil deposits secretly on the grid. Then you take it in turns picking squares. The player with the highest score when all of the squares have been uncovered is the victor.

There are a few twists here and there though. For example, if you and your opponent put oil on the same square, anyone trying to dig there will be hit with an explosion that costs them points. And oil deposits that are close to each other offer up bigger rewards. 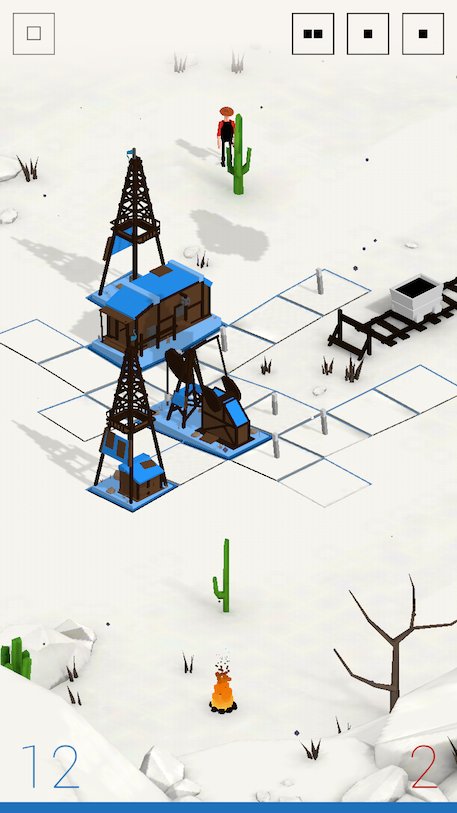 Along the top of the screen, you're shown what shape deposits are left on the board. But figuring out where they are, and which squares you need to avoid, is entirely down to you.

And that's about all there is to it. Levels get more complex the deeper you get into the single player game, while playing against a real-life opponent is often a lot more fun. Just because playing with real people is always more fun.

There's no progression for your characters here, and while that keeps the game on an even keel, it can sometimes make pushing through tricky challenges feel like a bit of a waste of time.

Oil is a good digital board game, but it's not quite a great one. It's going to keep you interested for a while, but it's unlikely that the single player campaign is going to be key to that.

If you've got friends you play games like this with on a regular basis though, then it's definitely one you shoule be picking up.

The single player might be a little lacking in this digital board game, but the multiplayer just about makes up for it
By Harry Slater
| Apr 16, 2018 |
iOS + Android
Find out more about OIL

Become an oil baron in OIL, out now on iOS