Touchgrind BMX 2 review - A riding sequel worth hurting yourself for?

Touchgrind BMX 2 is the sort of game that you play until your wrists hurt. I know, because I have played it until my wrist hurts. It hurts typing this review out. But it's a good hurt. It's a hurt that I've earned.

There are a few problems with the game, aside from the pain, but it's still an awful lot of fun. And it's brilliantly compulsive in all of the right ways.

If you're looking for a game to tickle your extreme sports fancy, then this is going to do it in spades.

You control the game with two fingers. One on the front of your bike, and one on the back. When your fingers are there, your bike moves forward.

When you're airborne, flipping your fingers around in a variety of combinations pulls off a whole bunch of tricks. There's bar spins, tail whips, and all manner of flips and wiggles as well.

Chaining together these tricks earns you more points. And there are challenges to complete as well, involving pulling a number of moves, getting points, and much, much more. 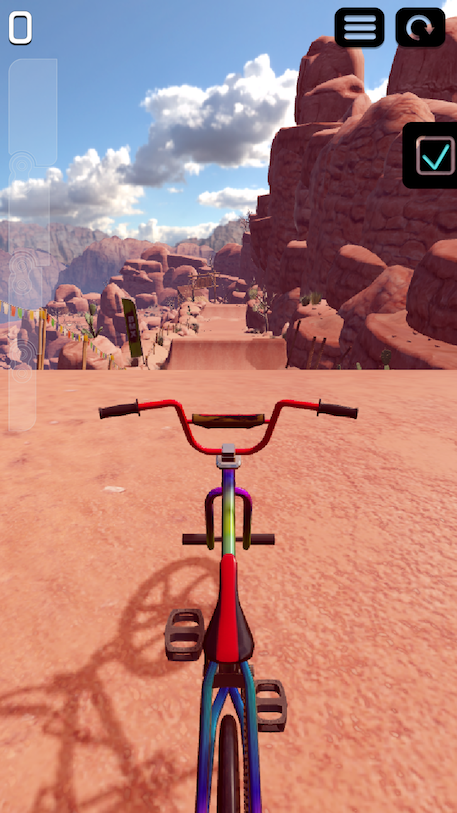 You get new bits for your bike as you play, and while they don't change how the game plays, they let you customise the look of your ride.

There's multiplayer here as well, which sees you trying to beat your opponent's score on a run. It's a fun twist, but you can only have so many of them on the go at the same time.

There's a limited amount of content here, unless you reach in your wallet, but there's enough that you can get deep into the experience all the same.

Spin it to win it

But while there's a bit of a dearth of tracks here, there's still an awful lot to enjoy. Piecing together the best tricks, finding out where you can push things and where you need to pull back, it's all an entertaining part of the package.

Plus it looks great, it's slick, and you don't have to pay anything to pick it up. Just make sure you take a break every now and then, otherwise you'll end up with a slightly broken wrist like me.

A brilliant, slightly flawed ride, but one that's well worth picking up
By Harry Slater
| Apr 13, 2018 |
iOS
Find out more about Touchgrind BMX 2

Touchgrind BMX 2: Tips to help you on the peddles