I haven't played the first Attack on Titan game, but to be honest it doesn't really matter to this sequel. I've seen the Anime, after so many people tagged it as the next big thing, and I loved the concept. I was less keen on the giant naked Titans, with their seemingly endless toothy grins.

Thank goodness this game allows me to strap into the ODM gear and swing through towns, slicing the napes of these nightmare creatures. I had the chance to become a member of the scout group, alongside Eren and other characters from the show, and kill Titans.

Attack on Titan 2 isn't just about killing giants - though it will take up the majority of your time - there are also some nice little RPG elements here too.

Fighting alongside squads of people builds friendships, which can then be heightened outside of combat by talking with them and training together. Doing so boosts your player created avatar with unique stats or special moves.

This, of course, fills in the story as well, but it does a great job of upgrading play styles without grinding battles or juggling equipment. The stats and moves still need to be equipped, through spending points earned via levelling up and they make you faster, stronger or healthier.

There's still equipment to buy, upgrade or reinforce. The latter is done by combining items for small stat increases. Upgrading requires materials, which you get during fights and as rewards after a battle, and grants larger boosts or special perks. 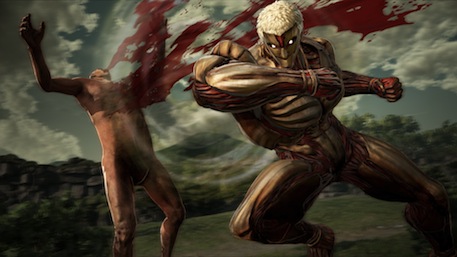 All of this is performed at the end of a 'day' in game, when the fighting has died down and you're free to explore the base. There are plenty of NPC characters to talk to, though their replies are limited.

Attack on Titan 2 is almost an open world game. The towns in which fights occur are sprawling, if a little repetitive, and taking the game online or opening up new areas does allow you to stretch your digital legs. However, there are clear boundaries here.

There's no need to explore, so the exploration isn't there. Everything occurs within a set space at every instance. Time to fight? The game loads in the town. Time to upgrade and chat? It loads in the barracks. 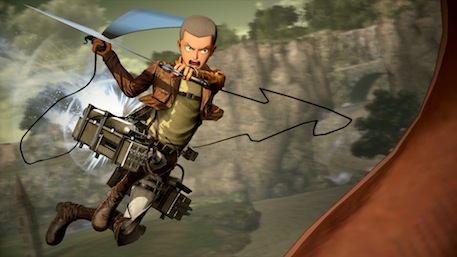 To be honest, the upgrading isn't all that integral until later in the game. Most Titans can be vanquished with the starting gear - the secret to success here is controlling your team and learning the systems you need to kill a Titan.

Fighting takes place in the air, as cadets and soldiers fly through the air with an almost Spider-Man likeness. The movement is lovely and goes a long way to making you feel unstoppable.

Occasionally the camera will swing too wildly and cause a few bumps, but it's rather intuitive on the whole. The same goes for the fighting.

Tapping the right shoulder button snaps the you on to the nearest Titan, and moving the right stick cycles through areas of their bodies. Target the knee to slow them or the arm to stop them grabbing others. 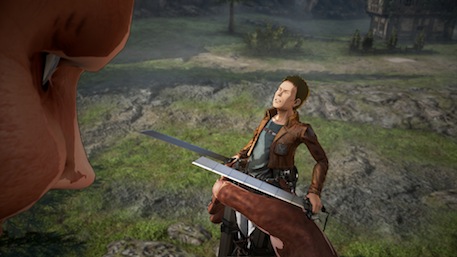 Of course, we're aiming for the back of the neck. Holding the left shoulder button and tapping the D-Pad directions, you can guide a squad member to attack the legs while you sweep up through the air, curving around the rear of a Titan to dash in for the kill.

It's all as simple as hitting a few buttons at the right time, and the tutorial does a lot to make everything feel simple and easy. Soon, taking out a Titan becomes effortless and thrilling, but ultimately a little repetitive.

The missions ask you to head out and defend a town. Or defend a team mate. Or defend Eren as he utilises special abilities. There's a lot of flying around the map, racking up kills, and that's really about it.

You're graded at the end of each mission and rarely did I see below an A grade, even if I went off wandering and ignored smoke signals from NPCs calling for help.

The same occurs when teaming up with friends or strangers online. Just get out there and kill Titans, choosing from characters unlocked through the campaign. It's fine, but it lacks variety and should you team up with a faster character, you'll be chasing more kills than scoring them.

There's some base building and tower defence ideas thrown into the villages, meaning if you stop and build a new base your equipment is replenished, but again, I rarely ran out of ODM gas or blades.

Turrets can be installed to help in fights, but seem a little insignificant when the battling comes so easy. It doesn't take long for the flow of combat to lose a little of the shine and joy. 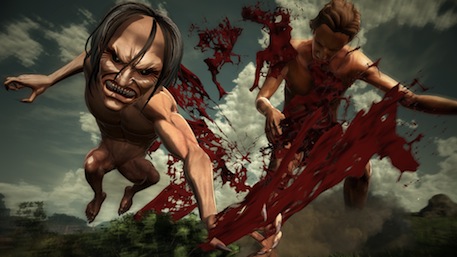 Thankfully, the story is gripping - more so if you're a fan of the show - and it moves along at a pace through lovely cutscenes which blend nicely from the gorgeous visuals on display throughout.

Attack on Titan 2 is a very mixed bag. It has the potential to be a great adventure game, but the lack of variety and the excruciatingly slow increase in difficulty makes it feel a little bland when you aren't grappling around the world and performing executions.