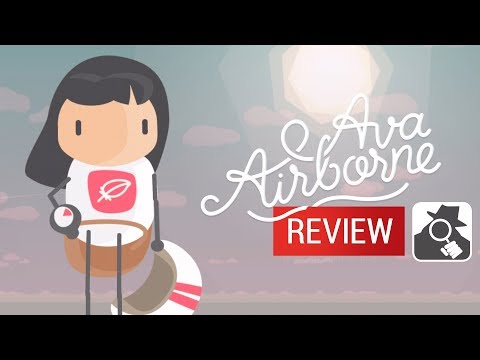 A couple of months back, Alto's Odyssey jolted the creaky old endless runner genre back to life - just before putting it back into intensive care by being so unsurmountably brilliant.

How on Earth do you even match, let alone top, such a beguiling arcade experience as that?

Laser Dog has had a ruddy good go at it with Ava Airborne. While it doesn't quite pull the trick off, there are plenty of bright ideas to be found.

Reach for the sky

As the name suggests, Ava Airborne isn't bound to the ground like its biggest rivals. Rather, our plucky heroine takes to the skies underneath a hang glider (at least initially).

Pressing the screen makes you climb, while releasing sends you into a nose-dive. There's a delicate balance to be struck here, as touching the ground means game-over, yet you also need to maintain speed to stay airborne.

In practical terms, you don't need to be too precise with your aerobatics. All you really need to do is aim for one of the countless speed or height-boosting items that litter Ava's beautiful world.

There are human cannons, balloon-suspended fans, and poppable balloons that grant you a bonus spurt. If all else fails, there's the odd trampoline on the ground for those improbable last-minute reprieves.

As I've already hinted at, you're not limited to your initial hang glider here. Very soon you'll unlock your first alternative means of transport, which may well behave in a very different way.

In my case that was a yo-yo, which acts a bit like Batman's grappling hook. After that I unlocked a chicken costume that enabled me to flap to greater heights. You'll doubtless plot your own unique course through the game's plentiful transport options.

Indeed, there's plenty of everything in Ava Airborne. There are unlockable buddy characters, trailing helpers, new launchers, powerful charms, trail-creating lollies, and trinkets that can change the entire look of the game.

This abundance of stuff extends to Ava's world itself. In addition to all the height-boosting paraphernalia mentioned above there are assorted black balloons that send you into a deadly dive, electrical gates that look like they escaped from Jetpack Joyride, and bonus star trails and gates that channel the spirit of Nights into Dreams.

Back down to Earth

If all of this sounds terribly exciting and varied, well, it is. This is a lovely-looking, highly entertaining game. But Ava Airborne is so eager to please that it occasionally gets in its own way.

By throwing so many doodads and trinkets and distractions your way, the game struggles to build a sense of momentum - which is something that all the very best runners excel at. Meanwhile the wide open, gadget-filled world that you're flying through can make a decent run feel more a matter of luck than skill.

The game's stop-start nature is underpinned by an irritatingly insistent F2P structure, which seems to be constantly nudging you towards watching ads or paying to unlock some new bonus or other.

Ava Airborne is a game that's awash with ideas and distractions. It's the perfect game for anyone who struggles with a short attention span, or who has started to tire of 'normal' endless runners. But it's just a little too scattershot to stand with Alto and the other grounded greats.

Ava Airborne is a beautiful endless flier that's full to the brim of ideas, distractions and unlockables. It just lacks the momentum and laser focus of the very best
By Jon Mundy
| Apr 6, 2018 |
iOS
Find out more about Ava Airborne