It can feel a little unfair making immediate comparisons between games, especially as they're often made by totally different people with entirely different themes and ideas behind them.

And while Vandals does take more than a little bit of inspiration from the turn-based puzzle series, its aesthetic, themes, and new mechanics mean that it actually feels like a very different game.

Vandals has you navigating a series of small, maze-like levels, moving from node to node with the goal of tagging a wall and then getting the hell out of there.

It's rarely as simple as walking straight up to the wall and spraying, of course, as there's plenty of guards and other things you'll need to avoid on your quest to vandalism glory. 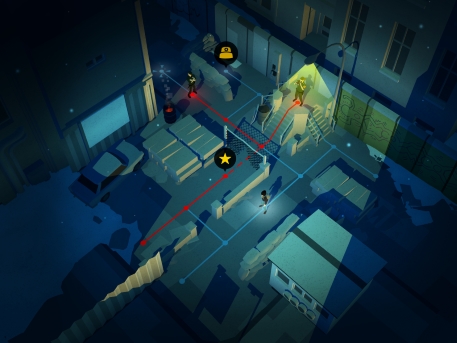 A lot of your tactics will revolve around well-timed moves and positioning on the grid, but you also have the ability to whistle and draw attention to your current location or use certain items at specific nodes to traverse the map or throw people off your scent.

These include manholes that can teleport you to another side of the map, or bottles which can be thrown elsewhere to divert attention.

So far, so GO. But there's a few things in here which set Vandals apart from its main inspiration and give it an identity of its own.

First off, there's the graffiti itself. Far from just reaching an objective and moving on, Vandals tasks you with drawing your own art on the wall before you flee.

You get a few different colours to choose from, and then draw on the screen with your finger. It's quite simple but, based on some of the creations made by the developer, there's plenty of scope to paint some truly vivid images.

Once you've tagged your objective, every guard in the area instantly becomes aware of you and starts moving in on your location. This is the other big shift – every level requires you to not only consider your route to the objective, but also how to get to exit unseen afterwards. 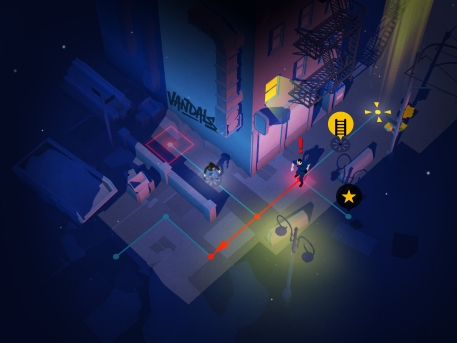 Being spotted isn't game over, though you do get bonus points if you manage to get in and out without being noticed. There's also hard-to-reach collectibles in each level, if you're feeling daring.

On top of all that, you can learn a bit about street art while you're playing. Some levels have hidden extras which tell you a little bit about the history of graffiti and street art and help provide a little more context to your actions.

And if you just want to show off to your mates, you can share any graffiti you draw in the game, for no reason other than to tell everyone how great you are at drawing.

Cosmografik is promising around five hours of gameplay across sixty different levels, with locations around the world and in different eras to show off how street art has evolved and affected the globe.

And best of all, it's a premium game – you can expect it to launch on April 12th for $3.99/£3.99, and we'll more than likely have some better formed impressions of it around that time.