What's your favourite Pokémon game? Whichever entry you chose, I can almost guarantee it involves traipsing around a vast map catching and battling monsters.

That's the core premise of the mainline Pokémon series, after all, and precious few franchise spin-offs have measured up to its high standards.

Detective Pikachu doesn't quite buck that trend, but it is a thoroughly charming, surprisingly absorbing mystery adventure that makes great use of the source material.

You may not control the titular behatted Pokémon here, but Detective Pikachu is undoubtedly the star of his own game.

In one of many nods to the animated series, you play a bland young go-getter with an axe to grind. Tim Goodman's PI dad has gone missing while investigating a series of strange Pokémon incidents, leaving only his Pikachu behind. 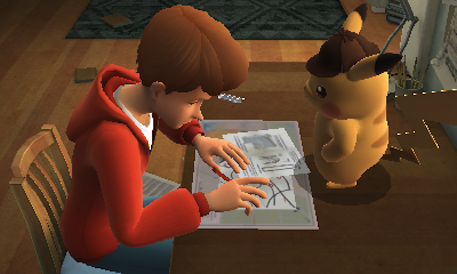 It soon becomes apparent that this isn't the squeaky bundle of energy we all know and love. This deerstalker-wearing Pikachu has a keen deductive intellect, a serious coffee habit, and a preference for walking on his hind legs that reflects a certain pomposity.

Most unusually of all, this Pikachu talks - though only Tim can hear his gruff Seth Rogen-like voice.

Making the star of the game himself a mystery is a clever move. You'll slowly piece together Detective Pikachu's tale as you solve each of the game's cases.

These cases grow in size and vary in setting, but they all incorporate the same basic components. Each involves toing and froing between a small handful of contacts - both human and, thanks to Pikachu, Pokémon - to gather testimony. 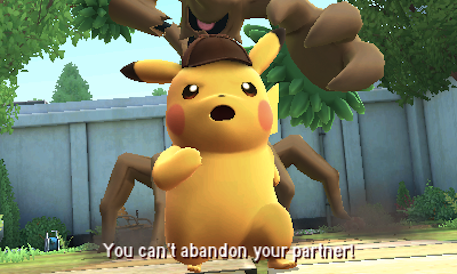 Eventually you'll unlock the necessary body of information to progress the case in a new direction, as laid out in the game's Case List and Case Notes folders on the bottom screen.

Along the way you'll need to decipher basic environmental puzzles and engage in straight-forward QTE events, before convening to present the correct sequence of evidence and thus crack the case.

The game plays out rather like an Ace Attorney game, or even the Professor Layton series - albeit much easier and lighter on the puzzles than the latter. There's no turn-based battling or open world exploration to be found here, that's for sure.

Let me Johto this down

Detective Pikachu is undoubtedly a very easy game, and it doesn't require a great amount of brain power to waltz through its nine chapters.

You simply need sufficient concentration to pick up on its clearly telegraphed clues. You'll always have access to key information through the aforementioned reference material, too. 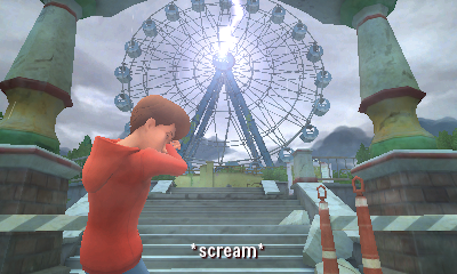 It's still a lot of fun to work your way through the game, but a large part of that appeal is down to the charming exploits of Pikachu in the many incidental cutscene snippets, as well as the game's expert use of the wider Pokémon universe.

Fan of the series will pick up on an abundance of references, and each case is steeped in franchise lore. This is a world where Pokémon are companions and assistants rather than press-ganged gladiators, which makes for an interesting angle on well worn detective game tropes.

Ultimately, Detective Pikachu is more interactive fiction than true detective game, but its easy-going charm and entertaining lead should ensure a fun time is had by all.

A charming detective game that's perhaps a little too simplistic for its own good. Fans of Pokémon's fiction will lap it up, however, and in Detective Pikachu himself we have a new breakout star
By Jon Mundy
| Apr 2, 2018 |
3DS
Find out more about Detective Pikachu

What's the future for mobile AR?