Originally released on Android a while ago, it recently debuted on iOS with publisher Crescent Moon at its back. In it, you play as the last creation of a dying supercomputer and have to traverse the levels, finding the pieces to help keep it alive.

It may have the style factor down, but how does Reed fare against our knowledgeable and enthusiastic App Army? Let's find out.

Levels are quite small, it has the simplest possible platformer-based controls, and there's nothing new in the gameplay. The music is the biggest plus point, and though its graphics are a bit confusing sometimes, I'll put it under cute category.

Hopefully there are 100+ levels because repeat value is almost null.

I was hoping that Reed would be more of a traditional platformer, with levels to explore and items to collect. There are bite size levels, each one lasting 30 seconds or so, and that was a disappointment. There's not much to do and the levels are not very interesting.

The controls are okay, but feel a bit "slippery" at times. I was really hoping to like Reed, but there are better alternatives out there (such as Duke Dashington Remastered).

I honestly don't know what to start with. The game plays like the whole thing is on ice as it feels like I'm sliding around and I can't get to grips with the glitchy/blocky graphics. It just seems like a cheat - no need to invest time and effort into good backdrops and sprites if you are going to cover it all in pixels and glitches.

Definitely not something I will be playing more of, sorry.

I enjoyed the pixelated look and controls are quite serviceable, but disliked the hard-to-read font. Your task is to grab a cube and make it to the next level portal while avoiding obstacles like spike-filled pits, dart guns, disappearing platforms, etc. The levels are fairly short and the difficulty curve is not insurmountable at all, but I called it quits after 30 minutes, as I felt like I had seen it all.

On the whole, Reed is a standard mobile pixel art platformer, which can be recommended solely to the genre aficionados.

I'm all of twenty levels in on this one, and overall it's not a bad game. The levels are compact and quick, but I really think it would be better if the controls were just a bit tighter. There are times I feel like the directional control is a little loose and as mentioned above, there is a tendency to feel like you are sliding along the map.

The art is nice and reminds me of both Fez and Catbird. I like Reed well enough, but I think Fez is probably the better value for the money.

Keeping things brief: been there, seen it, done it. I didn't find anything new here and the control system added to my frustrations.

I found the presentation a bit dull and got bored with it quickly. In a genre already packed with better alternatives, it's not one I will be returning to. 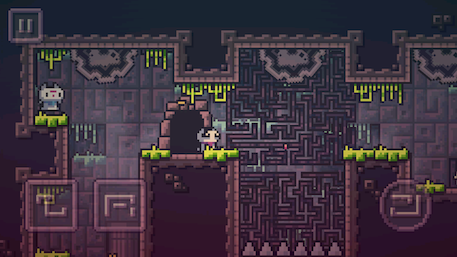 I'm on iPhone X, with the latest iOS version, but the game runs in standard iPhone 6 resolution. The font text is ugly and totally unreadable. The game is quite fun, controls are responsive, but a little laggy, and for the visual part it's okay with simple pixel art.

The action is quick and it's easy to progress among the numerous short levels. Though, it's more die and retry than exploration. After one hour of play, nothing's pushing me back to the game: no collectibles, no level editor, etc.

For me, Reed is enjoyable, but for a short time.

This is the kind of pacey platformer I can get a long with. The challenge is about the right level and, even when you died, the re-spawn was quick. The levels are short and snappy so you feel like you're making progress really quickly.

I couldn't read any of the text: either my eyesight or just the design of the game, and graphically I found it okay and generally pleasing to the eye.

It's a good little game for anyone looking for a quick platformer.

Reed is an intense platformer which offers fast levels that follow each other really well. If there are no real difficulties in the beginning, it will become more demanding over the levels without it being unacceptable. It'd also be very suitable for a good, old speed-run.

To succeed in Reed, the timing in your actions and the precision of your movements will be decisive because small mistakes do not forgive. The challenge is far from unattainable, but it will require determination and perseverance as it is a platform game with die-and-retry-like features.

For me, it's a good game with wanted glitches making the world strange, but consistent, and gives it an aesthetic of its own. However, it's a pity that it's not compatible with iPhone X.

Reed has a nostalgic feel, though it's very confusing at the start of the game. Graphics are a bit too extreme, and gameplay-wise, old-school Mario is way better than this.

Reed's short levels are little bites of precision platforming that are more often frustrating than rewarding, and not particularly innovative or clever. The progressive introduction of puzzle elements in the level design is slow and uninspired.

VVVV is a smarter platformer, FEZ is a cuter platformer with more heart, Standby is a more satisfyingly challenging platformer, and RunGunJumpGun is better at bite sized gameplay. All of these games construct the frame of reference for Reed and they are all a better investment of your time.

Reed is not a bad game, it is an uninspired one, and feels dated on a scene where the envelope on innovation has been pushed so far.

Quincy Jones (iPhone 8 Plus)
The good: Love the look of it. I'm a sucker for old school pixel art.

The bad: Controls are slippery and there nothing spectacular here to write home about.

Conclusion: Been there, done that, don't want to do it again.

The game has a few good features, like the cute graphics and the flow of the levels, but those are outweighed by the bad ones. Generally speaking, it offers nothing new - it's like a tiny clone of Super Meat Boy, but without the funny, gory parts.

Platformers aren't generally my genre of choice, but I quite enjoyed my time with Reed.

Its dinky little levels lend themselves nicely to casual gamers and the gradual ramping up of difficulty is handled well. The chilled out electronic music is very easy on the ears and helps somewhat with the frustration you'll experience as you make your fifth or sixth attempt at one of the more challenging segments.

I liked the achievements you receive as you discover the various ways you can die, although I think most gamers would be hard pressed to miss them on their first playthough. The controls on touchscreen are a little fiddly, but if you're a fan of platformers, and like short bursts of play, I doubt you’ll be disappointed if you purchase Reed. 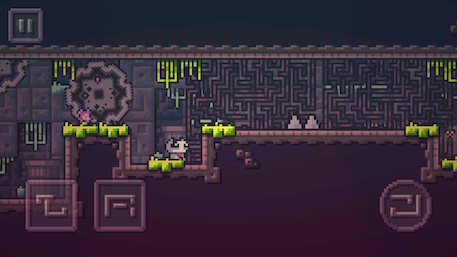 Reed is a platformer in which you are a small cat traversing single small levels one after another. The levels have all the usual tropes, like spikes and moving platforms to hinder your progress. Die and you just start back at the beginning of the level.

Its sound is adequate and graphics are unique in their quirky style, the font choice, however, was a misstep and makes things difficult to read. Luckily, there isn't much to read. The controls, which make or break this game, are fine and I had no real issues with them.

Because of the way it's broken into small levels it's an easy game to pick up and play when you have a few minutes. It's hard though, so be prepared for a little frustration, and remember if you die it's your own fault - you just aren't good enough.

Reed is a simple platform game with a retro style and really nice music.

The glitches looks great, the game is really fun and easy to play, and you only need a couple of seconds for each level. But, some levels are hard and you must retry several times before you win it. I'm currently at level 31 and still going.

This is a lovely retro platform game. The graphics are pixel in style, the gameplay was simple and easy to pick up and go, and for a change the sound didn’t have me reaching for the mute button.

The one criticism I have is that the controls are very sensitive and the movement controls were too far across the screen, which meant they were difficult to comfortably reach when playing on the iPad. All in all though - not a bad game.

I've never really been a fan of platform games, and sadly Reed hasn't converted me to the cause. The retro look used to be cool and quirky, but now it just seems a lazy option as it's been done so many times.

The controls are very hit and miss. Too many times I tapped the jump button and nothing happened, but at least when you die you only have to go back to the start of the level. This game is not for me, but I'm sure some will enjoy it.

Overall, I like the game. The buttons are big enough for even my huge fingers and its controls are dead-simple. I don't like the chosen font and color-setting as the text is very hard to read.

I noticed that not everything is resetting when restarting a level. During one level you jump down on a small platform, which disappears after a bit, and you're then supposed to land on a moving platform. When I missed, restarted, and jumped down again, the timing of the disappearing platform was off.

I might seem negative, but I'm not (entirely). I just think the developer is more helped by points for improvement in the small space I'm given to work with.

After releasing in 2016 on Android, pixelated platformer Reed is finally out on iOS