Kirby has always been about harnessing the skills of others. The pink blob's main move is to suck up enemies and take on their abilities.

In Kirby Star Allies, Nintendo's B-team captain takes that concept to the next level. Here you can conscript up to three enemies to your cause as AI or human-controlled companions.

Thrillingly, you can even bring bosses along for the ride.

It results in a chaotic, creative, but also rather messy and unbalanced platform-brawler.

Yes, I just used the term 'brawler' in reference to the latest Kirby game. It frequently feels more like an uber-cute take on Final Fight or Streets of Rage than a typical platformer.

There's a heavy focus on the many different ways to dispatch KSA's eclectic range of enemies (which have always been a Kirby series strongpoint), and precious little pinpoint jumping. 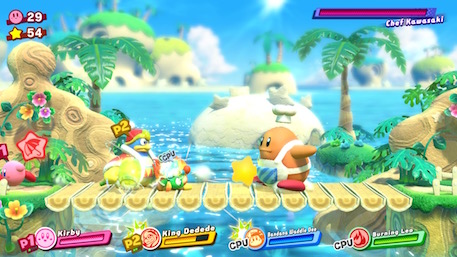 When you embody a new creature, hitting pause will bring up a lengthy roster of moves that are available to you - press forward and attack, tap attack, hold attack, down then up and attack, dash then attack - all resulting in a variety of ranged and physical techniques.

You even have dodge, block, and throw moves at your disposal. Essentially, every character has the kind of varied moveset you'd expect to see in a one-on-one beat-'em-up.

Or more pertinently, an all-against-all brawler. While Kirby is HAL's biggest creation, let's not forget that this is the studio behind the Smash Bros. series. Kirby Star Allies occasionally feels like some kind of extended single player Smash Bros. campaign.

Kirby Star Allies's combat system really is something. With four companions all scrapping away simultaneously, the screen frequently descends into a psychedelic bar brawl.

There's a whole elemental side to things, with electric, fire, ice, water, and wind attacks. Hold up on the stick and your elementally-imbued cohorts will power-up your attacks. You can do the same for your companions, and this swapping of abilities is often used to solve the game's incidental puzzles. 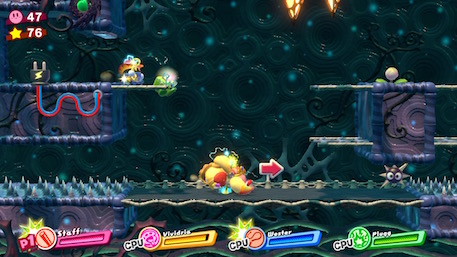 Lend fire to a whip-wielding character, for example, and you'll be able to flick through a nearby wall and set off a fuse to access a secret area.

You can even stack your crew on top of one another to form a moving bridge, or a bizarre flying serpent in brief shmup sections. Kirby is packed with dozens of such inventive, throw-away moments, which act as a crucial incentive to keep playing

Kirby Star Allies's defining problem, though, is that all this rough and tumble brio is undermined by a lack of puff.

I've described KSA as a platform-brawler, but the ratio is a little off. The game gives you a million ways to attack your opponent, but then gives you a light scattering of harmless cannon fodder that can be breezed through by mashing a single button.

Indeed, with a fully powered-up squad of AI companions, you often don't need to do anything more than move right. Your pals will even solve those aforementioned puzzles for you when they're in range. 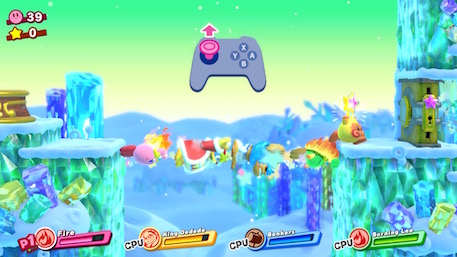 It's not the first time a Kirby game has been criticised for this, but Kirby Star Allies really is way too easy. Halfway through the game I realised I had accrued almost 50 lives, and hadn't once been in danger of losing a single one.

It makes the game very accessible, particularly to a very young audience, but it also robs the game of a sense of drive and purpose.

Kirby Star Allies's easiness wouldn't have been quite such an issue if it had fulfilled its pre-release promise and been a brilliant local multiplayer game.

It's not. The simplicity of its platforming and the lack of need for a second player (let alone a third and fourth) leaves additional human players feeling redundant. My own playing partner complained of being bored and underemployed within ten minutes. 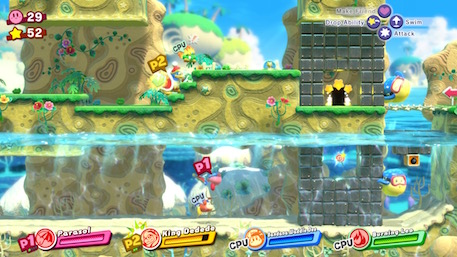 The closest thing to a meaningful task for additional players is in sections that split the players up, requiring you to flip switches for one another. Sadly, these sections are way too brief and rare.

A separate multiplayer cosmic-baseball mode makes for an enjoyable multiplayer add-on, but the main Story mode is probably better tackled solo - unless you're playing through with very young kids.

Kirby Star Allies looks, sounds, and occasionally even plays like the next Switch must-have we hoped it would be.

But it's all compromised by a brutally basic platformer framework. It's all breadth and no depth, with the result that Kirby Star Allies is merely decent rather than great.

A dizzying array of ideas and a varied combat system overlay a disappointingly basic platformer. Kirby Star Allies is a super-sweet confection that lacks a little substance
By Jon Mundy
| Mar 14, 2018 |
Switch
Find out more about Kirby Star Allies

Kirby: Star Allies cheats and tips - Everything you need to know to get started