A few years ago, a group of industry professions met at the Really Hard Indie Game Developers Conference. Together, they plotted to make a really tough title.

"What's the most devious combination of gameplay styles we could come up with?" asked the leader, at the head of the table. "We want something that's challenging, but also really moreish."

Some suggestions were put out there, but were put to one side. "What about mixing roguelike and shmup/bullet hell mechanics?" asked a voice from the back of the crowd of developers.

At least I think that's how Steredenn Binary Star, a retro-styled project From French developers Pixelnest Studio, came about. This is a formidable but enticing gameplay formula that by and large works really, really well.

You control one of five space ships tasked with, well, shooting the hell out of waves of other spaceships with some very big guns. The levels themselves are randomly generated, with a series of obstacles and environmental hazards that can be called upon to make life rather difficult for the you. 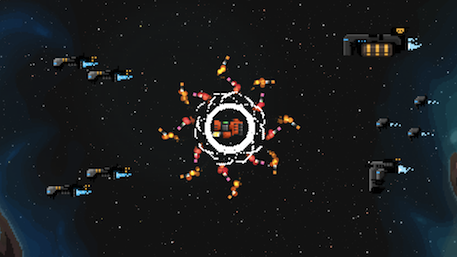 Levels themselves are actually pretty short and always end with a boss ship. These start off pretty difficult and only get more so as the game progresses.

Suddenly you'll find yourself on Amazon buying a new Switch because you threw the one you bought at launch at the wall. You're crying while looking at the 'Order Confirm' screen, and are unable to articulate the deep feeling of sadness and inadequacy within you to your partner when they ask if everything is okay.

Anyways, weapons, too, are randomly spawned, and as with other roguelikes, your milage really does vary on the arsenal bequithed to you.

There's a decent variety - ranging from the rapid-fire but hard to aim hypercannon, or the super useful and actually really effective ninja cannon, a weapon that spews out ninja stars at an alarming rate. 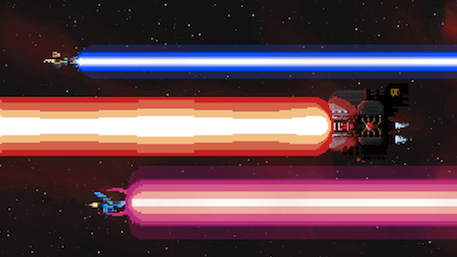 You'll need these guns, too, as the enemies in Steredenn Binary Star do not mess around. Though they come in interesting patterns to keep things fresh, their attacks can be surprisingly deadly and keep you on your toes.

There's your usual variety of lasers and bullets, but there's also other projectiles that cross the screen in less than a second and can easily kill you.

Before long, you're up against foes whose bullet patterns will absolutely fill the screen and you'll be gliding between them, doing some real seat-of-your-pants driving.

As with all roguelikes, death comes quickly and boots you to the start of the game, but with some smooth and quick load times, you're back in the action in seconds, with the short levels helping create a gameplay loop that is rather addictive.

The game also features a gloriously cheesy metal soundtrack that - when combined with the escalating challenge - gives a sense of shit getting realer and realer until shit is at its absolute realest.

The difficulty curve could stand to be smoothed out a bit - or this is me once again admitting that I am bad at video games - but for fans of the shoot-em-up genre that want the extra challenge this is perfect.

A tough as nails mixture of two of the toughest genres out there. It's still a good deal of fun though
By Alex Calvin
| Mar 9, 2018 |
Switch
Find out more about Steredenn: Binary Stars

[Update] Believe it or not, Pixel Plex looks like an interesting city builder and it's out now

The Bonfire: Forsaken Lands review - A bright light of strategy and planning in the dark