Evoland 2 doesn't just wear its influences on its sleeve, it changes it sleeve as you play, switching from art-style to art-style, shaking up the way you play and explore.

It's a bold gambit, and while it felt more like a gimmick in the original game, here it's integral to the plot. It's sort of like if Chrono Trigger offered up a different JRPG experience every time you leapt to a different time zone.

Sure, underneath it all there's the beating heart of a game we've all played a thousand times before, but there's enough warmth and compassion for the source material here, as well as some more cynical wit, that it's worth checking out.

The game, almost predictably, sees you playing an amnesiac hero. Waking up in a village with no idea of how you get there or what's going on, you set off to find answers.

Well, first you set out to find a sword. Because obviously you can't venture out without one of those. There are some tongue in cheek references too. Check the well, that's all I'm saying.

All of this follows the tutorial, which is presented in Game Boy hues of green and black. After a more modern pixel art section, you're then thrown back into a place closer to the 8bit era. Albeit with more colours. 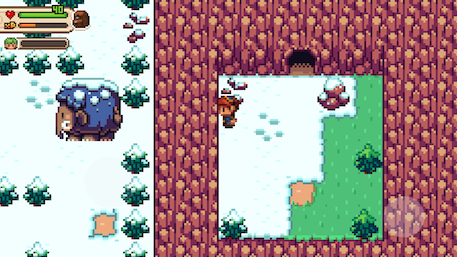 If that sounds jarring, it isn't. But that's down to the way the game handles it. Poke a glowy thing, read some funny words, and things switch around. The village you woke up in is gone, but time seems to be playing funny tricks with you.

One of the problems with the original Evoland was that the controls were a bit on the clunky side. They're better here, but they're not perfect. Sometimes you'll be hitting the attack button to swipe at bears or jellies, only to find nothing happen.

The joystick is definitely better this time round, and there's no getting caught on scenery or stumbling off in directions that you didn't mean to. Which is, you know, nice.

Unlike its predecessor, Evoland 2 tends not to get so swept up in how clever it's being. And that makes it a far warmer and more welcoming experience. It's still poking fun, but it's doing it because it cares, not because it's mean.

Sure, it's a little on the scatterbrained side, and there are RPGs on the App Store that do all of the things that it tries out better.

But as an experience in pleasant nostalgia, there's enough care and attention been lavished on this one to make it worth your while.

It sometimes wanders around a little lost, but there's still a lot to like in Evoland 2
By Harry Slater
| Feb 28, 2018 |
iOS
Find out more about Evoland 2

Our Clash Royale expert has a new home: say hello to the Mobile Minions