A lot of snowboarding games like to cover the screen with buttons. Push here to spin, press there to flip, slide a finger forwards on this joystick to ace your landing.

Not so in Peak Rider. It's stripped back to almost bare bones, and if anything that makes for a much more entertaining, and playable experience.

The skill here isn't in pulling off combos of tricks, nor is it from finding the best lines. This is a game that's all about near misses, huge cliffs, and twitchy reactions.

Your main controls here involve tilting your device. The sensitivity is just right, and weaving through the frozen world of rocks, trees, and ramps that the game throws at you is a simple joy.

Push on the screen when you've launched off a ramp, or the edge of a precipitous cliff, and you'll pull off a random trick. Release your finger prior to hitting the snow and you'll slide away with a bunch of points.

You've also got a trick meter at the bottom of the screen. You fill this up with near-misses. Thee basically involve going perilously close to the stumps and stones that you're trying to avoid. 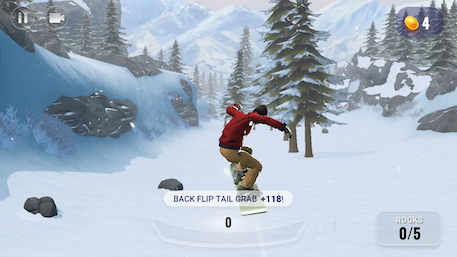 Once the gauge is full though, the next time you leap you'll be able to do something ridiculous. Most of the special tricks involve no longer being attached to your board. And you can fit a couple in to one jump to get the most points.

If all of that's a bit much for you you can jump into the endless mode and just cruise serenely down the piste. Well, sort of serenely. You'll probably hit a tree or two on the way down.

The game's real strength is the ease with which you can pick everything up. In no time at all you're going to be working towards mastery of the mountains.

No, it might not be as fully featured as some of the snowboarding games we grew up with on consoles, but then it's not trying to be any of them.

Essentially this is an over-the-shoulder auto-runner with a frozen theme and a little more freedom. It's never going to change the world, but it shakes the genre up enough that you're going to have a good time on its mountainsides.

A simply put together snowboarding game that understands the platform it's been built for
By Harry Slater
| Feb 28, 2018 |
iOS
Find out more about Peak Rider