By Harry Slater
| Mar 1, 2018
iOS
|
Lichtspeer
Get Lichtspeer on...
Find out more about Lichtspeer
Available on: iOS + Android + Switch
Subscribe to Pocket Gamer on

Lichtspeer is a flamboyant, no-nonsense game of flinging glowing pink spears at oncoming enemies. It's ridiculous, it's challenging, and it's strange that it didn't come out on mobile first to be honest.

Behind the brightness and the lurid deaths, there's an incredibly smart idea here. It's sort of like a mix between Angry Birds and a tower defence game. Except that it's not. Except that it is.

It's an action game, where the action is constrained beautifully, and where struggling with the controls is never the reason you fail. It is, in short, pretty damn brilliant.

Speer a hag you

After you're gifted the titular weapon by a pompous god, who tells you you're going to die a lot, you're let out into a series of strangely angular wastelands.

Here you're beset by fearsome creatures. Like sprinting zombies, towering ice giants, and a viking captain with a surprisingly natty helmet. It's your job to murder all of them.

Push a finger on the side of the screen and you'll be able to aim your spear. Lift your finger up, and the spear flies off. If it hits something, you'll get some points. Headshots are worth more, as you might imagine. 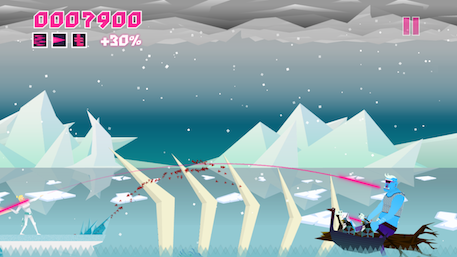 Miss though and your score multiplier is reset and the licht god gets miffed. Annoy him too much and you'll die. There are also special powers that you can unlock with the money, or LSD, that you earn.

These moves are on cooldown timers, but they can be incredibly useful if you're in a tight spot. You pull them off with a variety of different pushes and swipes. Your three pronged spear, for example, pops out when you tap two fingers on the screen just as you release your throw.

The carnage that you unleash is nothing short of monumental. Levels are split into one-screen chunks, and when you've polished one off the pile of bodies you leave behind is pretty staggering. That's not to say that all this slaughter is simple though.

I am an angry god

While you lose if you miss too much, you can only take a single hit from the menagerie of enemies before you need to start a section again.

That's easy to begin with, but soon the screen is crowded with flying enemies, giants that take more than one hit too down, and seals that slide down banks and land on your head.

But there's so much fun to be had here, and jumping back into the action is so easy, that dying isn't too much of a problem. It's a chance to learn from your mistakes, and get better for the next time round.

Lichtspeer is a brilliant, beguiling, and often chaotically stupid game. It's also one of the best things I've played on mobile for a good long while, and it's well worth picking up.

Lichtspeer cheats and tips - How to use every ability in Lichtspeer