Legendary Pokemon Kyogre and Groudon return to Raid Battles in Pokemon GO, but you won't have a shot at them for long

Earlier today, Niantic announced that its Pokemon GO Legendary Week would starting from now and running through until March 5th, so update your phones, folks. 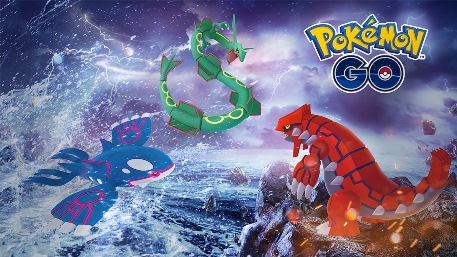 As it says on the team's official blog post, Kyogre and Groudon are joining Rayquaza for a seriously legendary week as they return to Raid Battles for a limited time. Given that these three have their own particular strengths/weaknesses, beating them's going to be as much a matter of smarts as it is skill.

Interestingly, you've got some stakes to be thinking about. If Rayquaza is beaten more than Kyogre and Groudon combined, you'll get more wind-preferring Pokemon hatching out of your eggs between March 5th and March 16th. Otherwise, you'll be getting a bunch of sunny/rainy day Pokemon instead.

If you want a little boost when it comes to battling these big beasts, Niantic's releasing some brand new boxes from tomorrow containing Raid Passes to help you out.

Also on February 24th, as the second Pokemon GO community day, rare dragon Pokemon Dratini will spawn more frequently for three hours. If you already have one and evolve its evolved form, Dragonair, into Dragonite during this period you'll get a Dragonite with the rare/powerful move, Draco Meteor. Cor.