Kill me once, shame on you. Kill me twice--

If you're a Switch owner it's likely you've either seen or played Death Squared. The idea is to solve the puzzles while controlling square robots around a variety of different grids.

We know it's a great game and that it fits perfectly on the party-friendly portable console, but what about on mobile?

Though we gave it a Gold Award in its iOS review, what will our elite team of eager gamers think about it? App Army - let's have a look at your thoughts.

Let me start by saying I love this game. Simple, but sometimes baffling and brutal puzzles, great voice-overs throughout with plenty of humour. I played this a lot on Switch and had a blast both single player and some limited co-op.

This port looks the part and seems to have much the same content, however for me this port is completely ruined by the controls. The blocks are far too difficult to see with fingers covering critical areas when manoeuvring them. Added to that, they seem to have some inertia that isn't present in other versions - I think this is when I'm trying move my fingers off the screen and it's overly sensitive.

It's a fantastic game which I recommend to all puzzle fans, just avoid this version or risk throwing your device at the nearest wall.

This is a fantastic game. The idea of controlling two objects with two different sides of the screen isn't new, but it's been well executed here. The controls do require some fine movements which can be difficult on a touch screen, but not impossible. The voice-over adds a nice level of humour to the game and for me, almost makes the game.

I would highly recommend this game for anyone looking for an action puzzle game.

First things first: grid-based puzzlers with bite-sized levels, where you switch between different characters to complete a task are some of my favourite things since the early days of App Store.

The only thing that ruined everything for me is a nerve-wrecking, precision-demanding, brutally unforgiving and absolutely devilish control scheme.

To make it easier for such guys like me the devs could at least incorporate the movement sensitivity setting or an alternative option of moving characters cell-by-cell a-la Hitman Go to eliminate the frustration factor of plummeting to your death or being zapped by laser guns time and time again. Would it work out for me with a Bluetooth-enabled controller? I don't know, but I want to believe so. 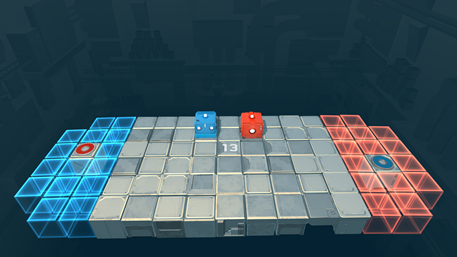 It's a simple, grid-based puzzler with minimalist graphics and a well executed control system, combined with small bite-sized levels make for a interesting gameplay. I did play this on Xbox before, but they have successfully made their iOS version as good as their earlier releases.

Clean UI is a major comeback for the devs on this port. Also the music, though sometimes repetitive, doesn't make me bored. The storyline is awesome which is, for me, the biggest factor, and the humorous dialogues between the characters is very creative and witty. Yes I did face a control issue on the iPhone but it was pretty good experience on the iPad.

Overall, a definite game to buy if you have an iPad. If not for some control problems, this would have been probably the best puzzle game.

I'll have to take my fellow App Army members' word for it that Death Squared is a good puzzler. After 15 minutes of struggling with the dire control system to reach the third level I gave up out of frustration. For me it's currently unplayable and I'd recommend it only to hardcore masochists.

Death Squared is, number one, a visually gorgeous game. Its voice acting is top-notch, music is a bit monotonous after a while, but not bad, and it's a very well-made, very slick puzzler/brain squeezer.

I found it quite challenging, but also found that the difficulty kicked in very quickly. I don't mind challenging games, but this went from simple to nerve-wracking very quickly. I'll probably keep it and play from time to time for the good reasons I've listed.

But, yeah, the frustration factor ramped up early which kind-of put me off a bit. I also found the lack of precise controlling something that didn’t help. It's a good challenge, but be prepared to be intimidated by this quickly.

In general I really enjoyed this game. It is very clever with some of the puzzles being real head-scratchers, but with none of them beyond resolution (at least as far as I've got to date).

However, there is one downside to the game that is so annoying and that is the controls. One side of the screen controls red and the other blue but as you move around the screen and the colour controls overlap, it's all too easy to end up over the side and having to start again. I played this on an iPad but I can't imagine how difficult it must have been for the people playing on a much smaller screen.

It's a shame because I like this game and I'm sure it wouldn't have taken much to tweak the controls to make them more manageable.

I've played this quite a bit on Switch so was curious to see how it translated to touch screen. It's great fun playing with friends but not really played much by myself. Seems that I will be sticking to the Switch version, however.

The controls for this game are just way too annoying. Doing anything with any level of precision is just impossible. Because of the frustration I just gave up with it after an hour and went back to the Switch version. Maybe it would be better on an iPad but I can't see it being anywhere are good as the Switch version. This game needs proper controls! 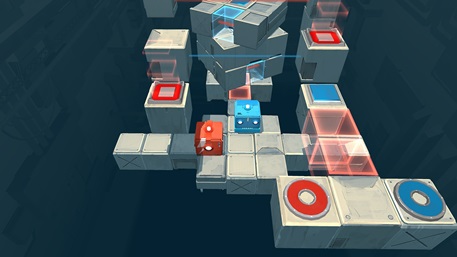 The controls in this game are quite finicky, so I can see how they would be difficult on small screens. On the larger screen of an iPad it's perfectly playable. Controlling movement requires patience and precision. The controls are clumsy, but when you familiarize yourself with them it becomes part of the meticulous play style.

This game is a lot more fun to play with a friend than by yourself. That being said, Death Squared goes out of its way to kill your partner by proxy of your actions. It's trial and error, but ultimately rewarding as the mechanics of each puzzle is revealed. Attitude is key to enjoying this game, it is as infuriating as it is rewarding, it'll test your friendships or relationship, but it's ultimately a bonding experience.

The style and humor borrows from Portal and pulls it off rather well. The controls remind me of Surgeon Simulator and the puzzle design is excellent, constantly throwing new elements into the mix.

When you grow accustomed to the controls there's a fantastic same-device co-op experience that really demands coordination the likes of which I have not experienced on iOS to date. If you have an iPad and you have someone you like playing games with, Death Squared is well worth the asking price.

When I first started playing Death Squared, I was disappointed and frustrated at the controls. However, once I got used to the sensitivity of the controls I had a blast playing the game. The graphics and sounds are good and the levels are well thought out and challenging.

I loved the overall presentation and humor of the game and would recommend it to fans of the puzzle genre. However, patience is a must to play the game due to the sensitivity of the controls. If you get frustrated easily, this game is probably not for you.

If my phone didn't cost so much I'm sure I'd have tossed it out a window while playing this game - that pretty much sums up my experience.

I hated the controls and it's not because I have sausage links for fingers. It really is a distraction from what I'm sure might be a great game, but as it stands right not it's not worth the stress.

Purrfect Date review - Is it as weird as it sounds?