Purrfect Date review - Is it as weird as it sounds?

The idea of dating cats is initially disconcerting. Sure, you like cats but do you want to get that close with them?

Once get into Purrfect Date though, those hesitations fade away. What you're left with is an interactive novel that offers up wily characters, mystery, and hilarity.

While the game doesn't totally hit every note, it does a good enough job to keep you interested, if you're patient enough to put the time in.

Purrfect Date follows the story of six research assistants, though you'll be sitting through one story at a time. Arriving on Cat Island and eager to get to work you'll meet Professor Pawpur who'll run you through your gear, your duties, and where not to go.

In the middle of your first night you're lured to a forbidden part of the island where deadly cats run rampant.

In the morning you wake up surrounded by kitties and are suddenly able to understand them. Alas, you've been bitten and the 'Catification' process has begun. 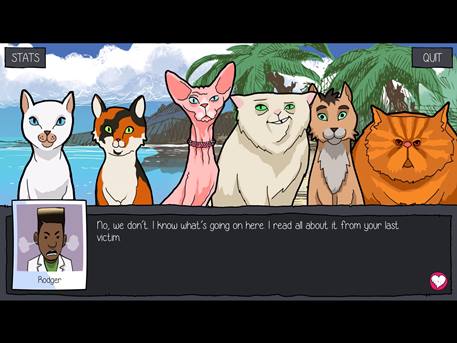 The cats fill you in - basically find the antidote to your situation or turn into a cat yourself - and send you on your way.

Throughout the rest of your stay on Cat Island you work through romancing a particular cat, researching, and doing recon on your evidence thus far.

Each researcher's story isn't long. Depending on how fast you read you can get through each segment in well under an hour.

While the trailer's song and certain bits of dialogue are a little suggestive, the actual 'dating' side to things is totally harmless, so breathe a sigh of relief.

It's fun working through each cat and experiencing their own purrsonalities (I'm not sorry), whilst solving the mystery of Cat Island at the same time.

It's also nice to see that each researcher's findings carry on to the next person, tying your stories together rather than forgetting about them.

Though you won't realise it at first, the story itself is incredibly detailed, filled with lots of seemingly insignificant findings that pop back up later on and make a difference to the plot.

While the experience is a fun one, it's also something that won't be for everyone.

On your first play-through there's a lot of dialogue to read, and while it's enjoyable to begin with iit quickly becomes a chore to sift through the conversations in subsequent play-throughs.

I'd like to have seen more choices thrown into the mix, if only to keep you on your toes. A lot of it feels like you're just along for the ride and that's a bit of a shame. 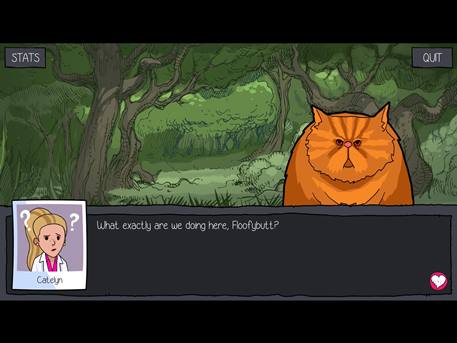 Despite its occasionally cheesy dialogue, Purrfect Date suffers most in its pacing. While I do enjoy deeper explanations and back stories myself, even I was struggling to pay attention at times due to its drawn-out narrative.

It would've been great to be able to skip through chunks of text you've already seen, especially when starting the game over after an unsatisfactory ending.

Dang it, you're cute

My feelings towards Purrfect Date actually sum up how I feel about my own cat. Though sometimes she annoys me, scratches my stuff, pees on the carpet, meows for attention, vomits up her food and then demands more I still love her.

There's no denying the game's got some issues, but even after getting frustrated at several points I still came away from the experience having enjoyed it.

If you're a fan of novels, cats, and mysteries, however, you'll want to add this to your list.

Purrfect Date is a fun, intriguing interactive novel that doesn't take itself very seriously. You've just got to put the time in to get the most out of it
By Emily Sowden
| Feb 23, 2018 |
iOS
Find out more about Purrfect Date
SEE COMMENTS

App Army Assemble: Purrfect Date - A graphic novel worth sinking your claws into?

Fancy feline romantic this week? Purrfect Date's got you covered

Uncover mysteries and romance cats in the dating sim Purrfect Date, coming to iOS and Steam this winter