Tekken review - Does this mobile fighter stand up, or is it down for the count?

By Harry Slater
| Feb 21, 2018
iOS + Android
|
Tekken
Get Tekken on...
Find out more about Tekken
Available on: iOS + Android
Subscribe to Pocket Gamer on

Fighting games are notoriously difficult to get right on mobile. There are a number of reasons for that, but two of them are the most obvious.

First, to get the biggest audience on mobile, your game needs to be aimed at the midcore players. And fighting games, with their combinations of quick reflex and complex strings of button presses, definitely sit at the so-called hardcore end of the spectrum.

Which is why I'm always wary when a high-punching franchise makes its way on to mobile. But Tekken has, at the very least, tried to solve one of those major problems.

The game plays a lot like Marvel's Contest of Champions. It's a one on one scrap-fest, that you control with a series of swipes and taps.

Swiping left and right shifts your character across the screen in that direction. The big twist here though is the cards that you can play. 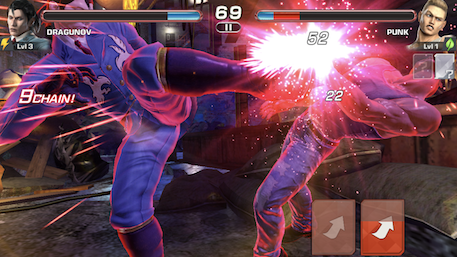 These represent your special moves. They show up in the bottom right of the screen, and tapping on one uses it. You can change your hand as well, giving you different options. Use a card in a fight though, and it's gone until the next one.

You can even combo together these special strikes, throwing in some regular attacks too, to devastating effect.

It's not the perfect solution to the control problem, but it does make the game more accessible to newcomers. And that's a good thing, because there's a lot to like in Tekken's mix of the old and the new.

Is it a classic? No, probably not. And while it does look a lot like a real Tekken game, there's a good deal missing that fans of the series are going to be upset about.

But on the flip side of that, games like this are all about compromise. They're about how far the dev is willing to sacrifice the vision of the original in order to fit it onto mobile.

While Tekken isn't a fully featured scrapper, it does do things a lot better than plenty of other games in the genre. Pick it up, give it a go, just don't expect the same fluidity of violence you'd get in a console or arcade game.

Want more? Check out our growing collection of Tekken articles!

It might not be classic Tekken, but there's enough punching and kicking here to keep most people entertained
By Harry Slater
| Feb 21, 2018 |
iOS + Android
Find out more about Tekken