The best mobile games don't require a separate controller. Do they?

Welcome to the latest in our series of Pocket Gamer columns. We're taking the best games writers in the industry and giving them a platform. Veteran journalist Jon Jordan is here each week examining the trends shaping your mobile games scene. Today: Jon digs through his drawers.

That was definitely the case as I started tidying and almost immediately uncovered a mound of old game controllers. Ranging from various Dreamcast and DualShocks through a number of generic GameCube controllers that confused me as I’m not sure I ever had a GameCube (but I suppose I must have), I came across my collection of smartphone controllers. And there were loads of them.

Dimly I recall a time when it felt like I was being sent them every other month; some of them even coming with Android smartphones I apparently was supposed to return to sender after testing. (I found those phones during my tidying too. Sorry PR people!)

And best - or worst - of all, I came across the one controller I do clearly remember: the one that started the entire craze - Gameloft’s Duo. 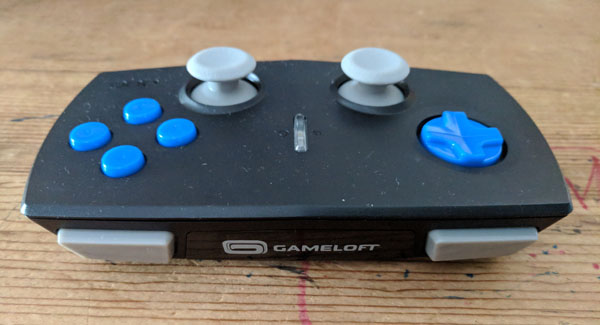 A controller only its mother could love

Certainly it has a power button, two joysticks, a D-pad, four action buttons, and two shoulder buttons. It worked to. But that’s where our description must end.

As Wittgenstein so rightly put it, “Whereof one cannot speak, thereof one must be silent”.

And it would be plain rude to say anything more about the Gameloft Duo.

Reach out and touch...

In its defence, form follows function, and back in 2012, Apple only let companies make game controllers that worked with iOS devices if they only supported games from a single publisher. Hence the Gameloft Duo only worked with Gameloft titles; in fact only certain Gameloft titles.

Given that niche market, Gameloft clearly designed the cheapest controller it could and sold it for as much as it could: $80.

Unsurprisingly, the Gameloft Duo wasn’t terribly successful, not least because as soon as it was launched Apple announced iOS 7, which set a specification for any compatible game controller to work with mobile games from any developer or publisher.

Yet, as my haul of seldom-used smartphone gaming controllers suggests, the whole attempt to expand the mobile gaming experience with console controllers proved as similarly unsuccessful as the Duo itself.

Not because those devices were as unattractive as the Duo but because the best mobile games don’t require a game controller.

The best example of this is the SteelSeries Stratus controller I bought a couple of years ago when Apple TV gaming was going to be the next big thing. Used a handful of times, there it sits alongside the Duo; a beauty and the beast combination, both set for a party that never happened.

That stated, this video showing how to add a physical shoulder button to your phone to better play mobile esports shooter Critical Ops (see from 3:24) demonstrates there’s always an exception to prove the rule. Total genius.

Subscribe to Pocket Gamer on
We'll be sharing more insight into the state of the industry next Monday and every week. Bookmark Jon Jordan's page now! If Jon's whetted your appetite for hardware accessories, we try to recommend good ones. Meanwhile, check out Susan Arendt's thoughtful dive into under-rated indie games too. And on Fridays, look out for Harry's Hot Takes.
SEE COMMENTS

The psychedelic action game Lichtspeer was great on Nintendo Switch but how will it hold up on iOS?