There are few games that have released on Switch that feel utterly perfect for the system, but now you can add Dragon Quest Builders to that list. I know, quite a bold statement, but hear me out.

Unless you've been living under a rock for the past year, you'll likely already know a little about the game. It takes the well loved Japanese RPG franchise and puts a new spin on things. There's no crawling through dungeons or creating a party of rogues. Here, you are a builder.

There's still plenty of fighting to do though, but you don't level up stats, you only equip better items that you create throughout the story. This leads to fighting bigger foes on grander scales, but you're always just an ordinary person under the armour.

When the game opens and you've chosen what your hero will look like, you're awoken in a cave by a Goddess who informs you that the world of men is under siege from monsters and you must build a city, which will become a beacon of light to others.

From humble beginnings, you stake a claim to a land which soon attracts NPCs. These characters come to live within your walls and dish out quests. Some will ask for weapons, others food, some will just need shelter until the time to fight arises.

Practically everything is a resource here. Whether it's mined from rocks, cut from trees, or found on corpses of monsters.

You'll find these resources in other lands, which you travel to using a system of portals. Monsters rarely attack your base while you're away, and when they do the game ensures you're prepared by letting you know they're coming. 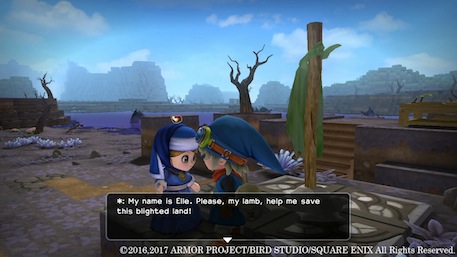 Back at base, jump through one portal and you'll find a lush green world with its own bestiary of creatures. Through another, a world of deserts. The different worlds will feel instantly familiar to RPG fans, and each of them contains plenty to discover.

At first, you'll be following quests to fetch different materials or craft new buildings - new building earn you points, earn enough points and you'll level up. Levelling up gives you new things to build. A bedroom made of dirt won't earn you many points, but upgrade it to straw or stone and you'll see your total increase.

The idea is to build a strong town with a thriving community, because at some point you're going to get attacked. When you get the signal you'll have to protect your precious structures from waves of enemies.

When fights do occur, they're a simple affair. One button does the attacking and another lets you jump. The key here is positioning, and landing hits when you can. There's no turn based battles or blocking or parrying. Your defence comes from equipping a shield or better armour.

Dragon Quest Builders uses a cube based building system, much like the one you'll find in Minecraft, but there's no real need to build monumental structures.

Everything has to be functional and that's why the point system only takes into account anything on the first two rows of a building. It limits imagination, but only to halt any abusing of the city progression.

Handily, Dragon Quest Builders doesn't limit players in any other way. Resources are always on hand if stored in the magical chest you create early on - no running back and forth for supplies - and everything can be built right from the start if you have the tools and products to do so.

NPCs will give out blueprints for rooms, but playing around with structure and items can unlock them earlier, so there is some room for experimentation. Rooms and items take hardly any time to build. There's no waiting on smelting or cooking here, which rewards players quickly for their hard work and exploration. 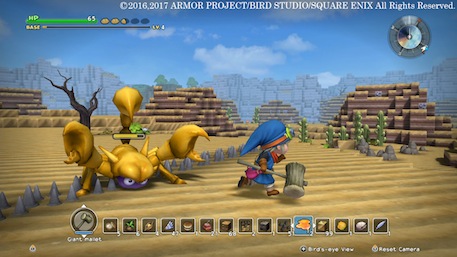 Which brings me back to why Dragon Quest Builders works so well on Switch. This is an ideal game to play in short bursts. The day and night cycle is brief, so spending 24 hours in game will take around quarter of an hour in real-time. Perfect for building that new armoury while on the bus. Or upgrading your Inn while on the toilet.

Not only does it play brilliantly, but it looks wonderful on the small screen. There is one minor drawback to playing handheld, however - the storage systems are eye-squintingly small and it's easy to lose track of items.

The story is robust and long, which makes longer play sessions equally enjoyable. The different worlds can be a little linear once you've properly explored, but that's not too much of a problem because the game as a whole is a wonderful experience and there are some lovely little surprises scattered throughout.

Dragon Quest Builders is a 'must have' game for the Switch. There's so much here to do, see, fight, and build, that what it lacks in imaginative creativity, it makes up for in scope and story.

A brilliant, feature-packed game that any self-respecting Switch player should be picking up right about now
By Dan Lipscombe
| Feb 14, 2018 |
Switch
Find out more about Dragon Quest Builders
SEE COMMENTS