Bayonetta Switch review - Is it worth picking up again for Nintendo Switch?

When Bayonetta first launched on the Xbox 360 and PS3 back in the day, I was one of the many people who didn't know what it was, and didn't bother getting involved.

It's not because it wasn't the kind of game that appealed to me, but because I just had no idea what kind of game it was, and the marketing didn't help.

It wasn't until the Wii U release when I finally understood what Bayonetta was, and why everyone else likes it so much.

It's a game about sex appeal, action, angels, demons, witches and empowerment. While it's easy to get distracted by Bayonetta's sexualisation and skin-tight outfits, she's not there to be ogled - she's there for herself. 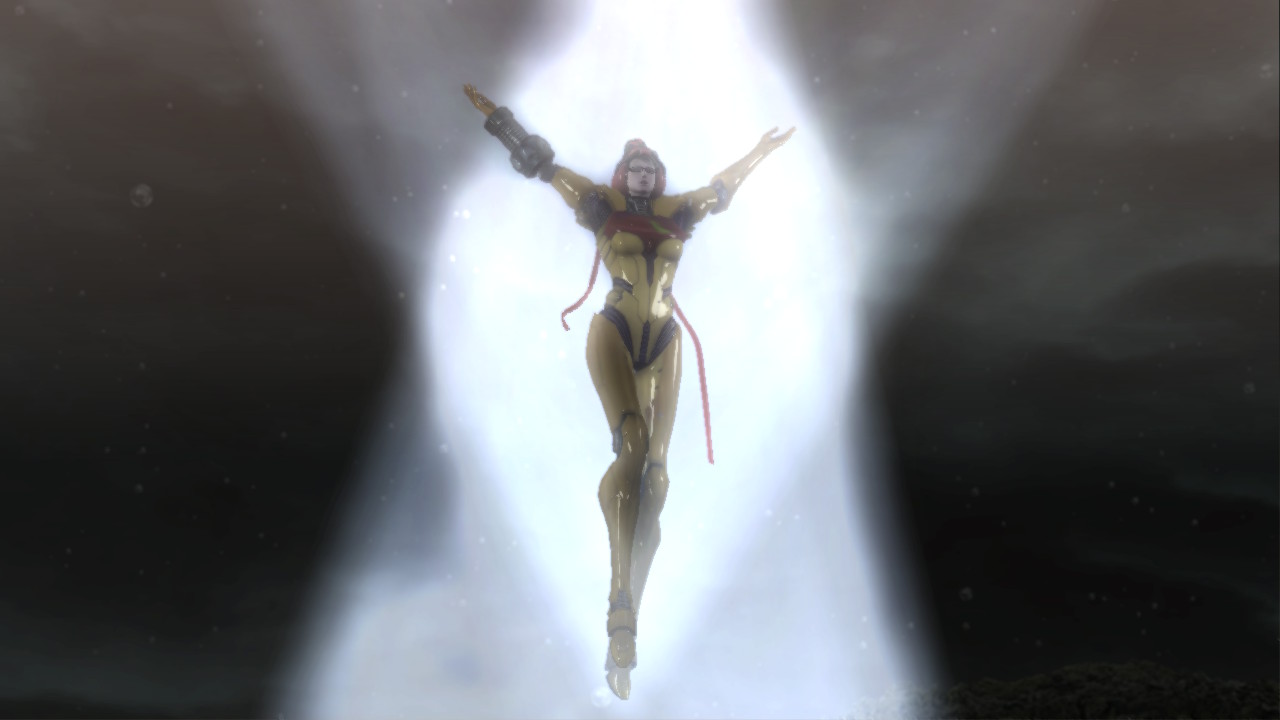 Bayonetta dominates the spotlight, knowingly winking and glancing at the camera during cutscenes while leading the focus with her fingers. She is totally in control at all times, and the game is really a story of her proving that to her angelic oppressors.

This is a character action game with a startlingly long list of combos and moves to perform, which only gets longer when you find the extended move lists for each weapon type.

You mix together punches, kicks and gunfire to improvise your own combos. There are smaller, more flexible touches available as well, like holding a punch or kick button to follow it up with gunfire, or skipping a beat while tapping out a combo to discover new move paths.

Honestly, if you want to go through the move list to find each combo you'll be there for a while. 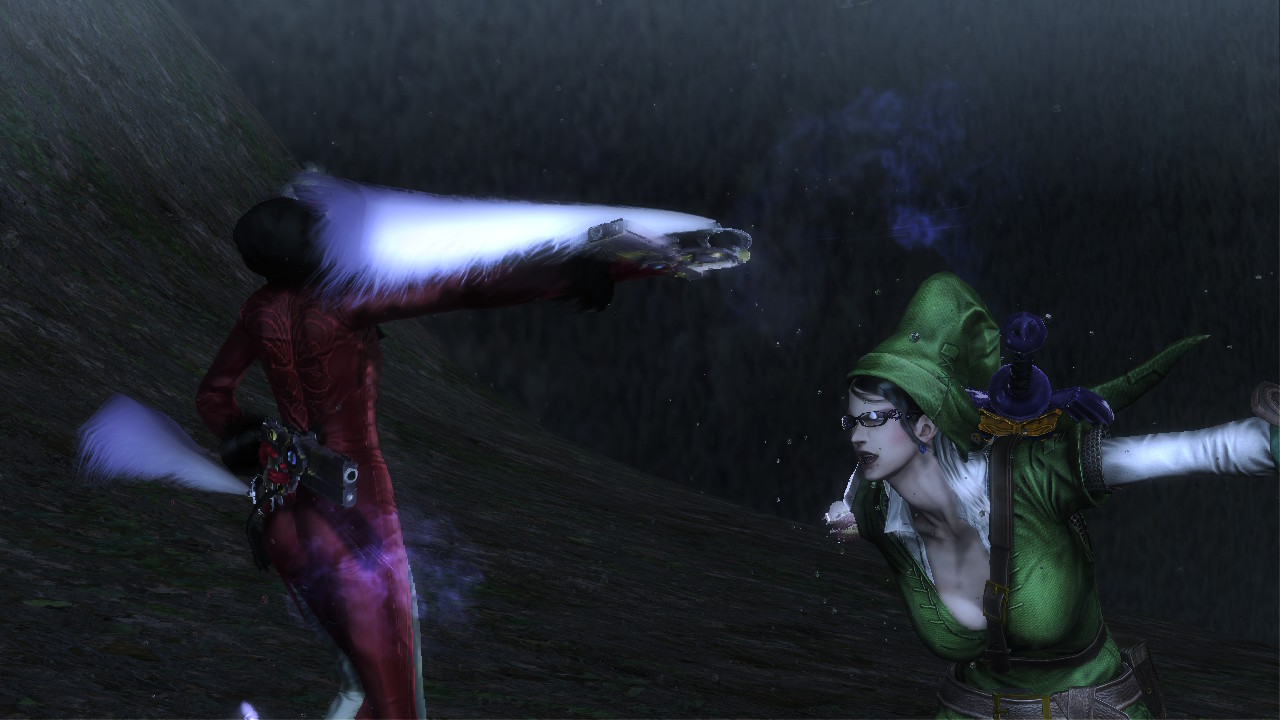 The combos change up if you start using swords, or whips, or claws, or shotguns, and so on, and so forth. Add to this the list of techniques and items you can get from the in game shop, the Gates of Hell, and you'll be whipping out brand new attacks and techniques until the end of the game and beyond.

You'll need to as well, if you want to hunt down those precious Pure Platinum medals and awards for each Chapter and Verse.

The bread and butter of Bayonetta isn't just the combat though, it's the set pieces. The now iconic clocktower scene from the beginning of the game is still as ludicrous as ever, and encapsulates the experience almost perfectly.

You're doing battle on the face of a clocktower that's plummeting off a cliff. It sets the scene for the rest of the game with ridiculous aplomb. 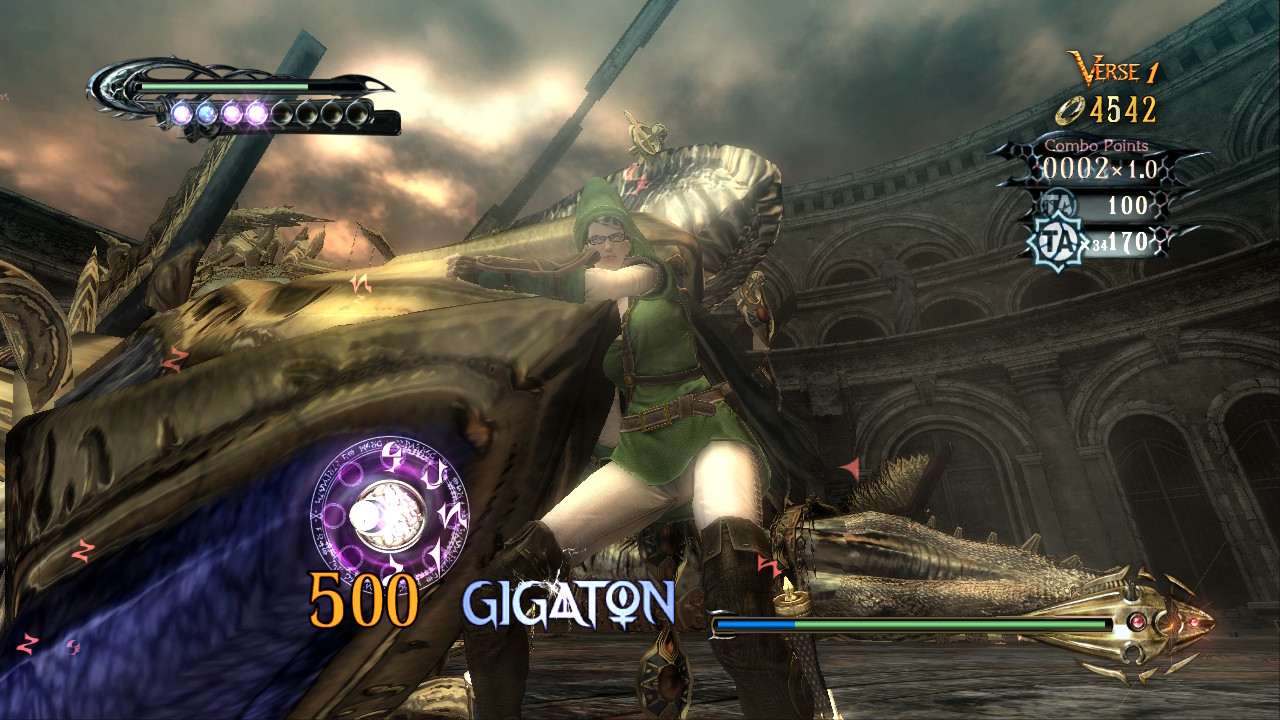 Things only gets more extreme from there. You get to dress as a nun in order to lure angels to a funeral, then gun them down.

You tear the dragon heads from an angel's body, and summo Madama Butterfly's limbs to tear apart enemies - it's exhilarating from start to finish, and offers a pretty steep challenge along the way, too.

At times the scale is breathtaking, the angelic monstrosities you have to take down tower over you, and you wonder how you'll ever take them down.

If you want to grab those Pure Platinums medals, you essentially need to attempt to not get hit. By anything. Ever. And Bayonetta isn't the kind of game that's going to make that easy. 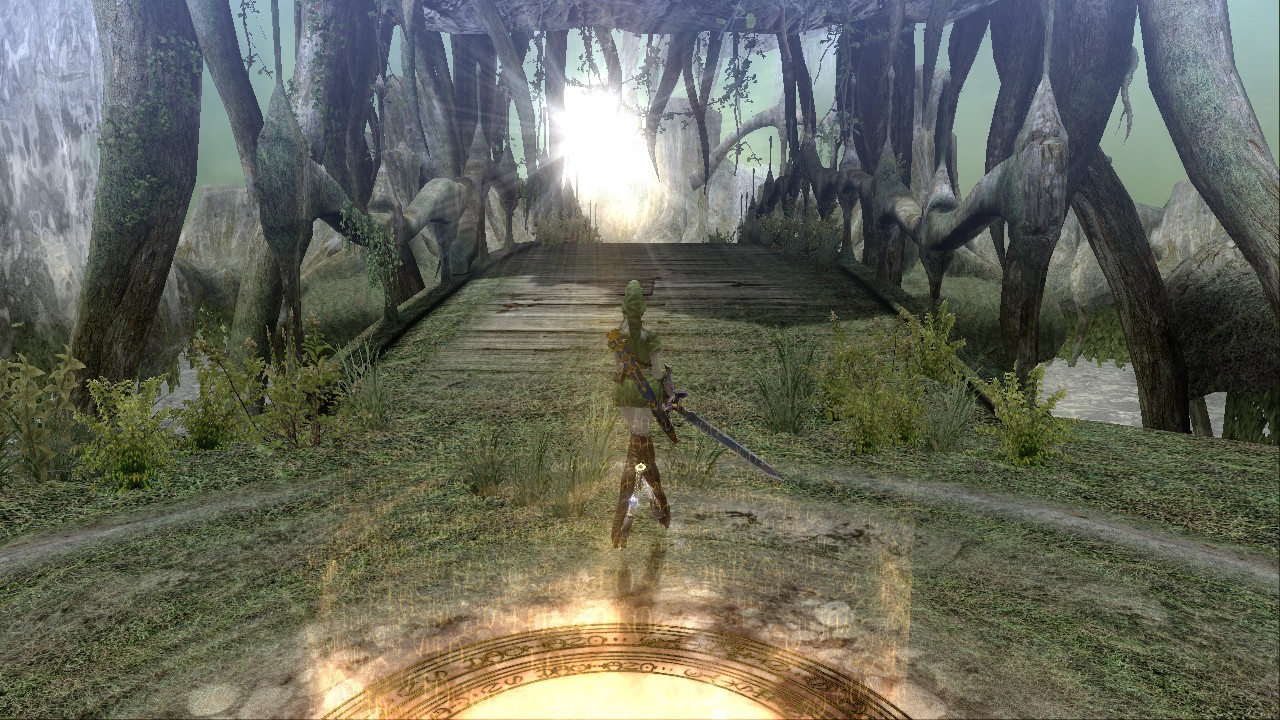 In fact, the game very deliberately uses it's full length in order to get players well adjusted to the combat system, and expects players to start achieving Pure Platinum on their second playthrough, at least.

That's because dodging moves and dealing damage isn't the easiest of tasks, especially not when you're attempting to do things perfectly.

To up the ante, there's the addition of Alpheim, which is a bit like a challenge room. You can find multiple portals to Alpheim, and therefore multiple challenges, in each of Bayonetta's chapters.

Here you'll be constrained in some way while given a tough fight. You might be limited to how much you can punch or kick, be given a time limit, or told not to get hit at all. 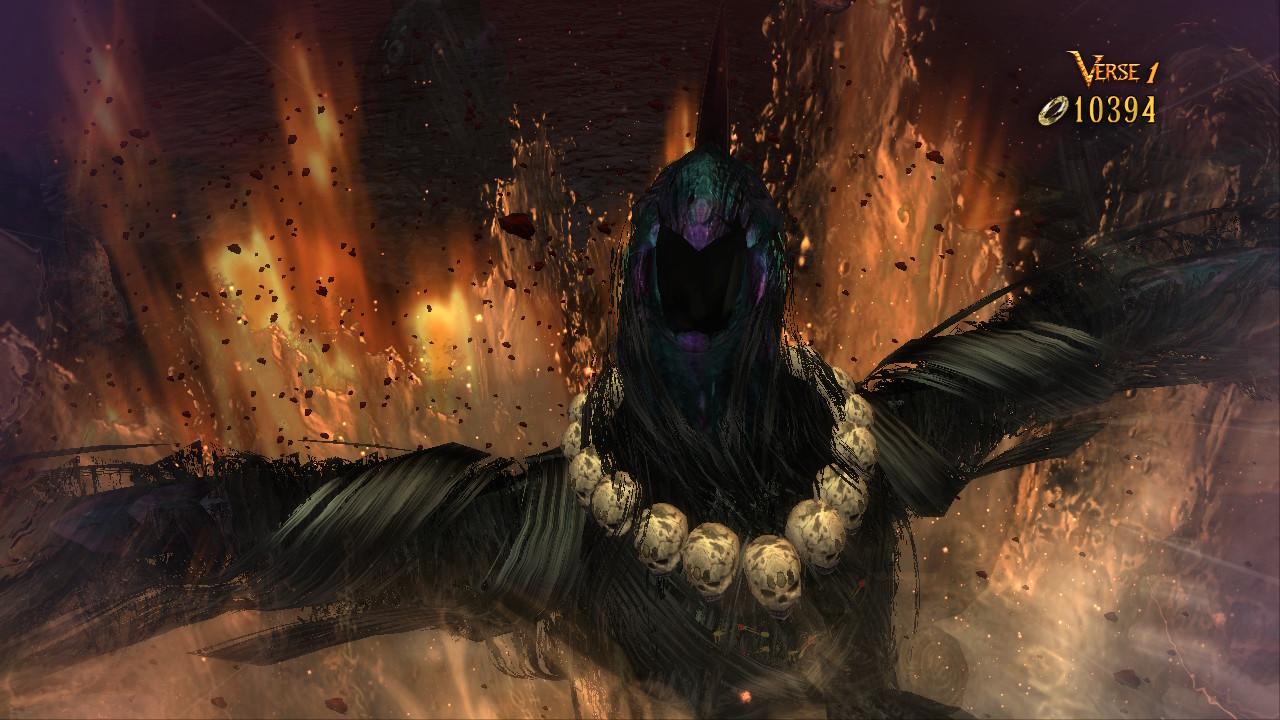 This is where your skills will be truly challenged, and yes, Alpheim scores contribute to your overall chapter rank.

Bayonetta offers so much, but on my return to the Umbran Witch's first adventure, I felt a little disappointed. The experience isn't quite as refreshing on the second run through, though it does feel good to have the skills necessary to pick up at least a few Platinum medals on my first run through the game.

The only real issue is that the game doesn't jump in to things immediately. Some early levels can feel slow in terms of pacing and progression, while later levels - conveniently the same place where you get your Panther Within ability - move at a much brisker pace, and were enjoyable to return to. 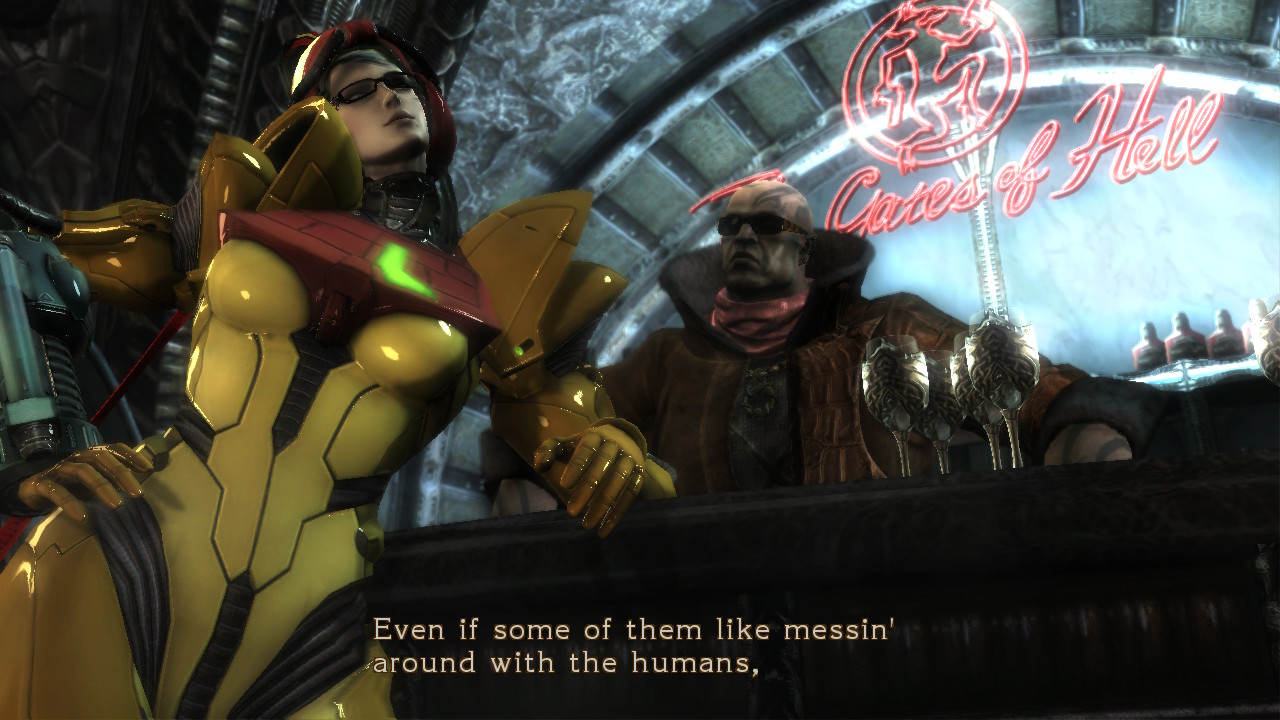 If you've played Bayonetta before then this isn't necessarily the best place to play it, but it's still a great experience.

Bayonetta for Switch might not be the best version, but it's well worth playing for the first time
By Dave Aubrey
| Feb 14, 2018 |
Switch
Find out more about Bayonetta

Lady Gaga is addicted to Bayonetta and we can definitely relate