Infinite West review - A wild west board game that mixes chess and a roguelike?

There are a lot of things you could compare Infinite West to. At first glance it's likely to be the GO games. It shares a similar style, as well as piece-moving mechanics that feel like they're heavily inspired by Squeenix's slidey puzzlers.

But there are also plenty of roguelike elements here. And more than a smattering of chess. If chess had guns and stetsons. And one player started off with a single piece and had to kill the other player's entire set to succeed.

Reach for the sky

The game sees you playing a lone gunslinger. Each level, or land, takes place on a gridded board. You can move one space forward, backward, or to your left or right every turn.

Land in a space next to one of the enemies and you'll attack them with your knife. You've also got a gun with limited ammo, and a dash move that lets you reach a space that you otherwise wouldn't be able to get to.

You've got three hearts at the start of the game, and a batch of health potions too. When you finish a level you can grab a boost from a crate. This can refill your various special moves, or make them stronger for the rest of your run. You can only choose one upgrade at a time though. 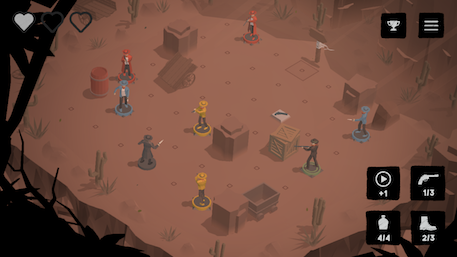 New enemies are added on a regular basis, and they all have different patterns of attack. Push on an bad guy and the game highlights in red the squares they can attack. You need to keep out of their reach and find a way to take them down.

There are some other interesting twists as well. Explosive barrels deal area damage, and if you line up a shot right you can take out two foes with a single bullet.

Die, and you're dropped back to the first land with none of your upgrades. While the menus might lack a bit of sheen, there's a really solid polish to the graphics that manages to be both sort of cute and sort of gritty.

There's a snake in mah boot

Infinite West might not have the staying power of some other solo digital board games, but it's a lot of fun in short bursts. There are no rules to learn, and the changing levels means no two games are ever quite the same.

Yes it gets a bit repetitive, but barging through the game and getting a higher score than your last run still feels great. And that's nothing to sniff at.

It might lose a little bit of its shine the more time you put into it, but Infinite West is an excellent short-burst board game
By Harry Slater
| Feb 13, 2018 |
iOS
Find out more about Infinite West

The best mobile board games of February 2018