Atomik: RunGunJumpGun Switch review - A shooter that's got more going for it than at first glance

It would be an incredible disservice to Atomik: RunGunJumpGun if I were to compare it to Jetpack Joyride, but it's the first thing anyone will think when the game starts. The mechanics, at first, are exactly the same as Jetpack - hold a button to blast streams of bullets into the floor and hover.

However, you can also fire forwards. Jumping is assigned to the L button, shooting to the R button. It sounds very simple. You have to travel from the start of the level to the end, dodging obstacles and collecting atomils, if you choose to.

You don't have to collect all of the atomiks in each level, but gaining a specific amount will unlock the next world. The interesting dynamic here, though, is when you're firing forward, you can't hover.

Atomik: RunGunJumpGun becomes a precise juggling act of shooting in two directions to allow our scavenger protagonist to nimbly move around the screen. As each level is basically an auto scroller, time is of the essence, and your reaction times need to be short and sharp.

For the first few minutes you'd be forgiven for thinking that things are going to get repetitive. Especially when you take into consideration that many levels will be played over as you die and get thrown back to the start. But with each new area, a new dynamic is introduced. 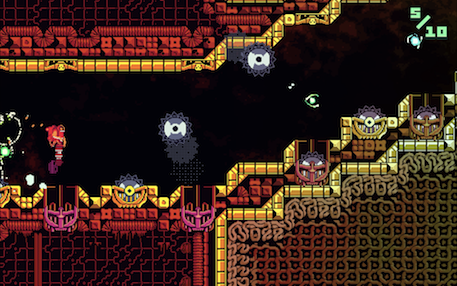 At first you'll be weaving in and out of gaps edged with spikes - the usual fare. Soon though there are cannons spewing fireballs, saw blades that bounce from the floor, and towers that blast out a stream of plasma which tracks your movement. And just wait until you get to the water.

At one point the ceiling becomes a wormhole, and moving through it will see you pop up from a different place on the screen. Then fighter pilots start harassing you, trying to take you down.

You get on free hit on each level. Take a second and it's back to the start. In the early levels you're only going to die a couple of time, but in later environments the death counter will be reaching triple digits before you even hit the halfway point.

Much of the game is about learning where you went wrong. You'll need to anticipate enemy fire, which seems random but is actually connected wonderfully to your movement, as well as memorising trap placement.

Thankfully the levels are incredibly short, as is the reset after death, so the game lends itself nicely to small bursts of play. A minor frustration is the inability to remap the controls, meaning hand cramps for me. But that's very minor.

Like so many games nowadays, Atomik: RunGunJumpGun is presented in a lovely pixel art style, but the biggest plus point is the soundtrack. It each level brilliantly, especially when you're wearing headphones.

ATOMIK: RunGunJumpGun becomes very atmospheric when played this way. Which is a major pro as there's barely any story here and what is delivered via soundbite dialogue between stages feels a bit tacked on.

What could be a relatively bland game truly excels on the Switch, and if you're a completist going for all the collectibles, you'll be here for a long time.

A frantic shooter that gets even better the deeper you get into it
By Dan Lipscombe
| Feb 8, 2018 |
Switch
Find out more about Atomik: RunGunJumpGun

Mario Kart Tour is going to be 'free to start' but what does that actually mean?