To some people, Dissidia Final Fantasy Opera Omnia is going to be a string of nonsense. Not just its title, which I think we can all agree is complete gibberish, but everything else it throws in your general direction as well.

It's a dense JRPG experience with a number of different mechanics pushed into it. Everything can be upgraded, in a variety of different ways. There's loot. There are summons. And that's before you even get to the core of the fighting mechanic.

On top of that it sometimes feels like you need a degree in FF lore to have even the slightest idea who everyone is and what on earth's going on. But in spite all of that, there's actually an awful lot here to enjoy.

The game is set on a world that's sucking up heroes from all corners of the Final Fantasy universe. So you're going to see Cloud fighting alongside people like Sazh and Y'shtola. Like I say, a degree.

Basically a bunch of evil monsters have broken into the world and a talking moogle who's the representation of destiny is bringing together warriors of light to whomp them in the face and close the holes they've made.

To do this, you take part in turn-based battles. They're reasonably standard JRPG experiences, with one slight change - the Bravery gauge. Rather than just smashing down a foe's HP, you need to smack them in the bravery bone. This adds to your bar and dilutes theirs. 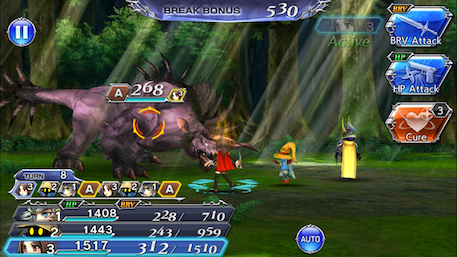 It's a pretty elegant system, and it makes you think about the roles of your party more than usual. Sure you've got healers, but who's best placed to deliver a big blow when the bravery levels are in your favour?

Then you've got all the menus. Here you add crystals to your characters to strengthen them up, play around with your gear, augment your abilities, and change out the summons that you take with you into battle.

You've also got a much larger roster of characters than you can take into battle. Sometimes you'll get bonuses for using specific heroes, so keeping everyone at around the same level is a pretty good idea.

There's nothing really massive to spark the interest here apart from the multitude of characters you're going to be playing with. Some of them are more famous than others, but you do get a steady stream of them, especially early on in the game.

Dissidia Final Fantasy Opera Omnia isn't a traditional FF game, but it's not ground breaking either. It's a nice little RPG distraction that you can sink a few minutes or a few hours into.

But unless you're a massive Final Fantasy fan, be prepared to look at the screen quite often and say "I have no idea who you are".

Can't decide whether to buy this or the new console version of Dissdia Final Fantasy? Check out our guide then

It might not be the most interesting Final Fantasy game ever made, but there's fun to be had here all the same
By Harry Slater
| Jan 31, 2018 |
iOS + Android
Find out more about Dissidia Final Fantasy Opera Omnia
SEE COMMENTS

The best iOS and Android updates this week - Batman: The Enemy Within, Animal Crossing Pocket Camp, Stormbound, and more