But at its heart, below all of the epilepsy-inducing flashes and migraine-starting sounds, there's a rhythm action game.

It just happens to be a rhythm action game where you're controlling a shiny silver space beetle that's trying to smash evil alien tentacle monsters with its intricate, wing-flapping moves.

Of course it is

The game sees you speeding down a hypnotic pathway. The world around you is colours and light, a shifting miasma of I'm not entirely sure what. It doesn't matter, really, because it's essentially a distraction.

Your focus is going to be on the line stretching out in front of you. Because that's where you're going to die. It doesn't matter how good you are, or how fast your fingers are, that trail is going to consume you.

To play you tap or swipe the screen at a required point. Didn't swipe into that corner? There goes your shield. Didn't push down when you saw that wall? Sorry, you are a dead silver space beetle. My condolences. 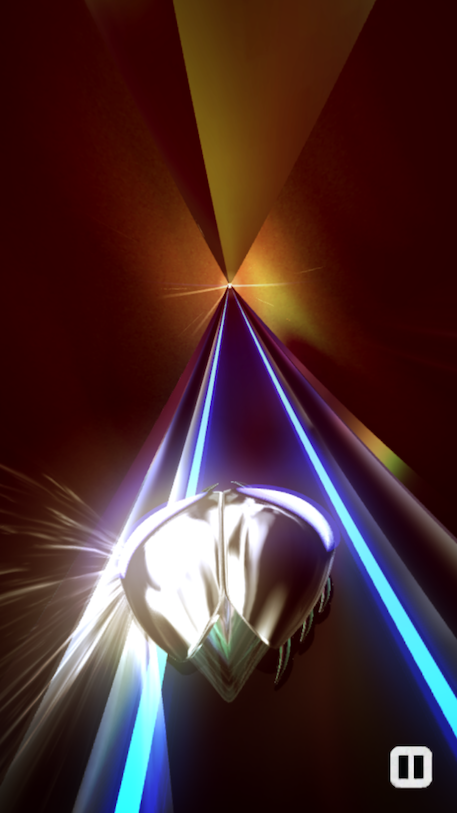 The levels are cut up into hyperactive bursts. Finish one and you'll be ranked by how well you performed your taps and swipes. Then it's on to the next in a flurry of beats and incandescence.

There's no time to breathe. There's hardly even time to think. Either the game sucks you into the headspace you need to complete it, or you give up. There's no third way.

And for some that's going to be too much. To be honest I know people who aren't even going to get past the tutorial. Thumper does just that - it repeatedly thumps you until you understand what it's trying to do, or else hate it with an all consuming passion.

Is it a good game? Yes. Is it a game that's going to slice the people who play it down the middle like, well, like a space beetle slicing through a bizarre interpretation of a hyperdrive trip infused with psychedelia? Yes.

If you've read this review, I hope that you know which side of that line you're on.

Because if you pick the game up and it turns out you're towards the screaming and never forgiving the game end of the spectrum, you've got a pretty bad three minutes waiting for you just down the line.

Want more? Check out our growing collection of THUMPER articles!

Thumper hates you. Thumper doesn't care what you think
By Harry Slater
| Jan 30, 2018 |
iOS
Find out more about THUMPER

The best iOS and Android sales this week - Thumper, Six Ages: Ride Like the Wind, Braveland Pirate, and more