Ah, the freedom of the open ocean. Sea spraying in your face, mounting the waves with your cruiser, it's as romantic as it is exhilarating.

Although this picturesque view of the ocean doesn't account for stormy weather, norovirus, or getting sunk by enemy gunfire - any of those things can ruin an otherwise wonderful voyage.

In World of Warships Blitz, you'll only have to worry about the latter, luckily.

In World of Warships Blitz you'll be sailing the ocean while defending and attacking territories and destroying enemy vessels.

But more than that, you'll develop a strange little attachment to the vessels you sail. Each one you earn on the development tree will make you beam with a little bit more pride, and of course, the effects in battle aren't to be sniffed at either. 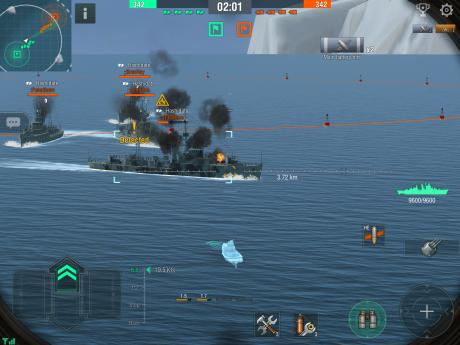 There’s a massive variety of ships to develop and use, including Cruisers, Destroyers, Battleships and Aircraft Carriers. As you would assume by the names, they all have different advantages.

With Cruisers you can expect to sail the seas at a fairly slow pace, but armed with a decent amount of guns that let you stage concerted barrages of gunfire at enemies.

Aircraft Carriers are slightly obvious, as they carry aircrafts which can be used to survey the battlefield and attack enemies vessels.

There might only be four classes of ships, but each ship's different statistics and weapons make each feel unique, despite the fact that you'll be performing the same actions across all of them, for the most part.

Most often you'll be engaged in war with other vessels, where you'll slowly sail to sea, using islands for cover, and fire off all guns at enemy targets.

Most battles can simply be solved by destroying the enemy team's vessels, although that might be the hard way. Fights can have victory conditions other than simple destruction, like capturing some points, or defending others. 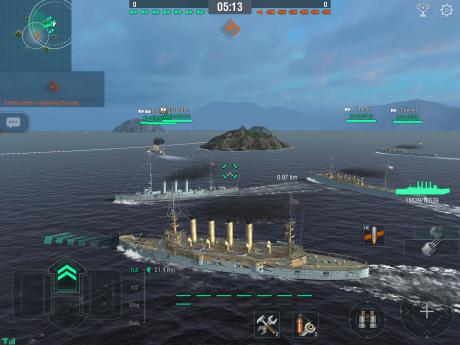 Jumping into battle isn't as simple as targeting your enemies and mashing away to sink them though. Depending on the type of gun or torpedo you're using, as well as the kind of ammunition, you can do drastically different damage to different kinds of vessels.

Heavy rounds are going to be required for vessels with high amounts of armour, while the smaller more nimble vessels simply need some strong gunfire of any kind in order to bring them down.

You’ll need to factor in trajectory and speed before shooting at - easy as pie when up close, but at a distance the more nimble ships can be a real hassle.

Of course, that all depends on what kinds of ships you want to use, though. Does a larger destroyer suit you, or a more compact and speedy ship with high levels of concealment?

Sailing in to capture targets stealthily is a good idea for small vessels, but should they get ambushed by a larger enemy, it'll rarely go well. 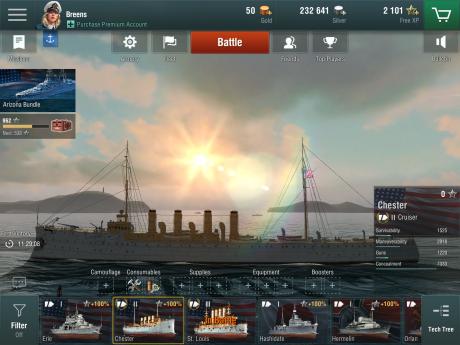 But the real question is, should you be spending your time waging war on the open ocean, or finding another game to be tap away at? And that's a difficult one.

World of Warships offers plenty to love - realistic and interesting models of ships, a rewarding development tree, cool naval combat, and more. But it's hardly the first stop I'd recommend for PVP action on mobile.

Shooting down enemy vessels feels good, whether up close or from a distance, and controlling the tide of battle always going to evoke a sense of pride.

Though, it's difficult to recommend World of Warships Blitz over anything else.

If you want naval combat on the go, then it's really the only game you need, but unless you're a fan of nautical navigation then you're probably better off with another game.

World of Warships offers plenty for fans of nautical engagement, but the pace might be a bit too slow for others
By Dave Aubrey
| Jan 30, 2018 |
iOS + Android
Find out more about World of Warships Blitz
SEE COMMENTS

Clash of LEGO? Angry Blocks? TT Games is making mobile-specific LEGO titles, but is that a good thing?